R Street Institute recently released a report on copyright duration entitled: "Guarding Against Abuse -- Restoring Constitutional Copyright." The report examines how copyright terms today are completely unmoored from the original public meaning of copyright in the Constitution, and how this incredible disparity hinders learning, destroys our cultural legacy, hurts innovation and the general public, but most importantly it impedes filmmakers, artists, DJ's and other content creators that need to be able to build upon the work of others to create new content -- as we have done for centuries.

There is a cost to extremely and unusually long copyright terms as we have under current American law. Indefinite copyright would likely have been considered to have been a violation of core natural rights. It is for these reasons that James Madison ominously implored future generations that copyrights and patents must be guarded with "strictness ag[ainst] abuse." But, by any measure, abuse is precisely what we have seen. 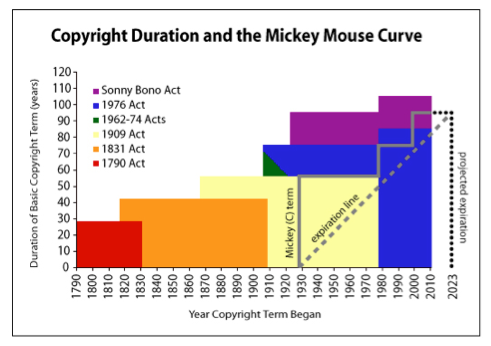 By contrast, patent terms have changed very little. Today's term for patents is 20 years. As legal historian Edward Walterscheid puts it, while patents and copyrights were included in the same clause of the Constitution and originally had the same or similar durations, the patent term has increased by just 43 percent while the copyright term has increased by almost 580 percent.

Congress must justify why a 20-year term can provide sufficient incentive to inventors, but not to writers and artists. The only explanation is cronyism and special interest manipulation: with patent policy there are interest groups on both sides, companies waiting for patents to expire and companies seeking to maximize their monopoly, but for copyright there is only one interest group, the copyright lobby, pushing for longer and longer copyright terms, without any heavy weight on the other side.

In the Senate Judiciary Committee report on extending copyright to life + 70, Senator Hank Brown (R-CO), the panel's only opponent, wrote that he "thought it was a moral outrage ... there wasn't anyone speaking out for the public interest." In Madison's words, there was no one to "guard" copyright "aga[inst] abuse."

Infinite Copyright on the Installment Plan

Ensuring that copyright was temporary was expressly written into the Constitution, but today special interest groups have created infinite copyright on the "installment plan," by continually extending it when it's about to expire. While the Founders' copyright was for 14 years, today's copyright lasts over 100 years. Thus the instrument the founders created to "promote the progress of the sciences" is actually being used to impede the progress of the sciences.

Copyrights and patents act, in some ways, as restrictions upon creation, speech and personal liberty. Under the Constitution, those restrictions are justified as necessary to provide incentives for creative genius, but they remain restrictions nonetheless and therefore must be heavily limited. It is precisely because they are restrictions, authorized and created by the government, that the founders called them monopolies.

The success of Disney epitomizes the importance of a rich public domain, allowing for copyright to eventually expire so others can learn from and build upon the work.

Disney, brought to you by the Public Domain:

Disney's recent 2013 film Frozen was based upon an 1845 fairy tale by Hans Christian Anderson, entitled The Snow Queen. Sleeping Beauty from 1959 was based upon a 262-year-old folk tale published by Charles Perrault in 1697.

Snow White from 1937 was based upon the Brothers Grimm folk tale from 1812, and when Walt Disney was asked about that film he explained that "[he] picked that story because it was well known." In fact three previous versions of Snow White had already been created by 1937, and Disney himself remembered having seen work performed before while growing up in Kansas City.

Under the current extremist copyright regime, as lobbied for by the content industry and enabled by Congress, there would never be another Disney Corp., whose success has been highly dependent on derivative characters and stories plucked from the public domain. Here is a short list of works created by Disney with storylines mostly or entirely based upon works in the public domain (including the often larger global revenues and other ancillary forms of lucrative merchandising and monetization): 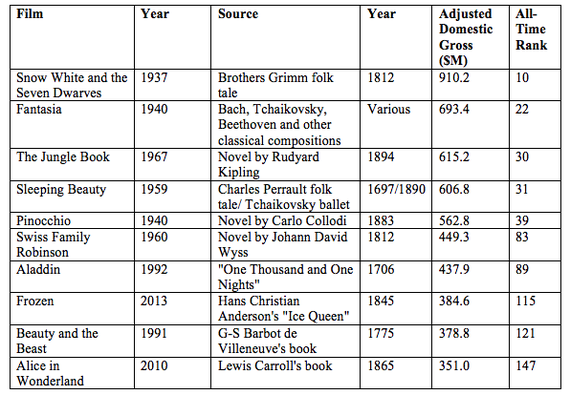 Other films in the Disney vault based upon the public domain include Cinderella, Robinson Crusoe, The Sorcerers' Apprentice, Pocahontas, The Frog Prince, Rapunzel, The Legend of Sleepy Hollow, The Hunchback of Notre Dame, The Little Mermaid, Oliver Twist, a Christmas Carol, The Three Musketeers, 20,000 Leagues under the Sea, Treasure Island, Tarzan, and John Carter.

The Disney Corporation, of course, added their own secret sauce, but the data shows that even 262-year-old storylines (not to mention earlier works, like Aesop's Fables and the Greek myth of Hercules) easily can be translated to the modern world. But under current policy, there will never be another Disney Corp., because the availability of new materials to use from the public domain essentially stopped in the 1930s. While Disney took and reused from the public domain, none of the works created by Disney, including derivative works based upon public domain works, has entered the public domain for others to build upon. If current policy is extended, they never will.

The content industry has claimed that copyright is their property, a claim which is legally, historically and constitutionally incorrect, but under this claim they have sometimes argued that even fair use impedes upon their "property." One of their most vocal voices in Congress, Marsha Blackburn explained her thoughts on fair use, "I think we have to begin to look at this issue not as just piracy, not as just snippets, but we have to look at it as theft." If, in the vernacular of the content industry, taking other people's work without paying for it is always stealing, then the Disney Corporation is responsible for one of the greatest thefts in world history. Hollywood has "derived more profit from reusing public domain works than any other industry in history," yet lobbies for policies to ensure their works never enter the public domain.

There have been numerous studies on copyright duration, to find the most appropriate term to benefit existing and future content creators, the general public and other interests, and every study shows that today's copyright terms are insane. There simply is not any study to justify our current copyright term. The only explanation is cronyism. In fact, at times the MPAA has even been frank on how it wields its enormous checkbook and political influence to get its way:

"Candidly, those who count on quote 'Hollywood' for support need to understand that this industry is watching very carefully who's going to stand up for them when their job is at stake ... Don't ask me to write a check for you when you think your job is at risk and then don't pay any attention to me when my job is at stake."

Very candid indeed. Dodd said this after members turned against their SOPA-PIPA legislation to censure the Internet. Dodd's statement seems like potential evidence of quid pro quo bribery, which is a felony:

A) We won't write a check, if, B) you don't support this legislation now.

Dodd is the epitome of the fear that the Founders had of these systems being abused by special interests generations later -- and precisely why Madison told us to guard these instruments, with "strictness," against "abuse."

And during SOPA/PIPA, when MPAA/RIAA and their allies tried to kill innovation and censor the internet 12 million Americans were there to "guard" against abuse, forcing Congress to back down.

Is Congress going to reform, or is this a shell game?

As the House Judiciary Committee is considering major copyright reforms to provide for the next Great Copyright Act, they must include copyright terms more consistent with the original public meaning of the Copyright Clause. But, instead, so far they haven't even announced a hearing on the topic, a demonstration that Congress is simply not serious about reform. It's not serious about fixing the broken copyright system.

Congress must set a firm limit on copyright term that is backed by the data, and thereby protect the public domain of the future. Copyright terms over 100 years are ridiculously and unconstitutionally long, and a shorter term would do better to facilitate the Constitutional goal of "promoting the progress of the sciences."