The Ayoreo-Totobiegosode Indians can’t claim six degrees of separation from any individual outside of their tribe, and they would prefer to keep it that way.

Signs of the Ayoreo, an uncontacted Indian tribe, have recently emerged in the the northern Chaco region in Paraguay, according to Survival International. The tribe is living on property of the Brazilian company River Plate and according to Survival International, members have been forced to flee the area out of fear of being discovered. River Plate came under heat last year for illegal deforestation of parts of the Gran Chaco forest, according to the Argentina Independent.

The Ayoreo-Totobiegosode have more to fear than just losing their land. Contact with the outside world may mean illness and death. “The people die in the forest frequently from catching white people’s diseases,” Iniciativa Amotocodie, an indigenous peoples’ protection group, said in a 2010 statement, The Guardian reports. “It’s very serious. It’s like genocide.”

In 2008, Survival International reported that Parojnai, an Ayoreo Indian, died from tuberculosis after contact with the outside world. Parojnai and his family were on the run from bulldozers clearing the forest they lived in. “We thought that the bulldozer had seen our garden and came to eat the fruit -– and to eat us too,” Parojnai had told a Survival campaigner before his death.

This isn’t the first time a company has threatened the existence of the Ayoreo. Wired Magazine reports that Mennonites, Christians who fled religious persecution in the mid-20th century and have since become an important agro-industrial force, have been been caught in the act of illegal deforestation. In 2009, the Brazilian cattle-ranching company Yaguarete Porá was accused of illegal deforestation of land that belonged to the Ayoreo. After receiving sharp criticism for its illegal activities, the company claimed that it would use the land to create a ‘nature reserve,’ winning Survival International’s 2010 ‘Greenwashing’ Award. 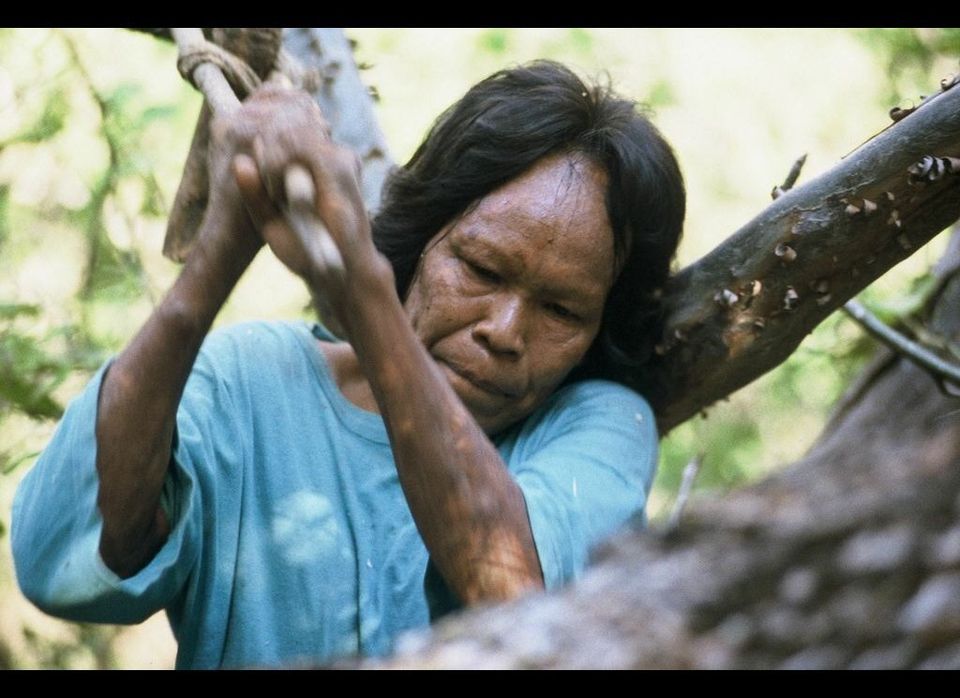 1 / 7
Ibore, a Totobieogosode woman, using a traditional axe to open a beehive for honey, Paraguay. <a href="http://www.survivalinternational.org" target="_hplink">Learn more about the uncontacted tribes here.</a> (Survival)
Survival