Every day a Dead Cool Daily Drop lands in my email inbox with a quick, enthusiastic tip about an adorable Ramones baby onesie, a tank top from a new Parisian Design House, a Rolling Stones iPhone application, a chain of sushi restaurants designed by Philippe Stark, a beach bag imprinted with a Roy Lichtenstein painting, a vampy Bettie Page inspired dress or an indie Australian band.

And every day, even when I'm busy, or my inbox is stuffed full of emails, I open up my Dead Cool Daily Drop to read about some unconventional feat of fashion or music, and I feel for a moment that I'm in touch with the hip, the edgy, the indie, the retro, the underground; that I know about beautiful things, and well-designed spaces.

Dead Cool is a relentlessly cool media tips site that sends out a "daily drop" email plugging something fabulous in the world of fashion, design, film or art. Dead Cool co-owner Michele Vlasimsky, a public relations guru based in Los Angeles, created Dead Cool in response to her disappointment with the existing "media tips sites." Vlasimsky -- whose companies Space Baby PR and Cine-Chic have promoted a long list of indie musicians, designers and filmmakers -- wanted a site that would appeal to herself, her friends and peers and would highlight all the cool fashion, underground art, great rock n roll, pop culture, unique hotels and destinations that she loved. "I created something that didn't exist to appeal to a very particular demographic," Vlasimsky said.

The result is Dead Cool, a simple, uncluttered site that reflects Vlasimsky's understanding of retro design and her art school background. Iconic photo booth photo strips edge every page of the site and every Dead Cool Daily Drop. "The photo strips are inspired by an obsession I had with both a photo strip of the artist Slim Twig from Canada and one of Edie Sedgwick. I absolutely love photo booth photos as much as say, The Kills do, who only have used them a million times."

Vlasimsky gears Dead Cool towards busy people living in a manic world that need short bursts of lively descriptions and quick links. "It's intended to mimic like if you were just blown away by something new you discovered and you had to tell a friend and were like 'Oh my God! You have to check this video out, it's so amazing!'" Vlasimsky said.

What makes Dead Cool work is the fact that Vlasimsky pours her lifelong passion for underground culture and aesthetics into selecting each and every Dead Cool Daily Drop herself. "In our case, saying it's 'curated' isn't just a marketing ploy, it is most definitely curated," Vlasimsky says.

Vlasimsky's affection for Montreal inspires Dead Cool, as does her love for "the weird things in L.A. many people don't know about, that are one-of-kind and surprising to people." That being said, Dead Cool is just as likely to feature a hipster flea market in Brooklyn, or a bar in Dubai designed by Karim Rashid, as an art space in Hollywood.

When asked about the response to Dead Cool, Vlasimsky speaks with her characteristic intensity, "It's been amazing. I feel honored by the calibre of talented and successful people that read it and love it! We're young, but have a who's who 'influencers' kind of subscriber base. They definitely appreciate the content and images. And I think it makes them laugh at times. I really couldn't be more happy and grateful about that." 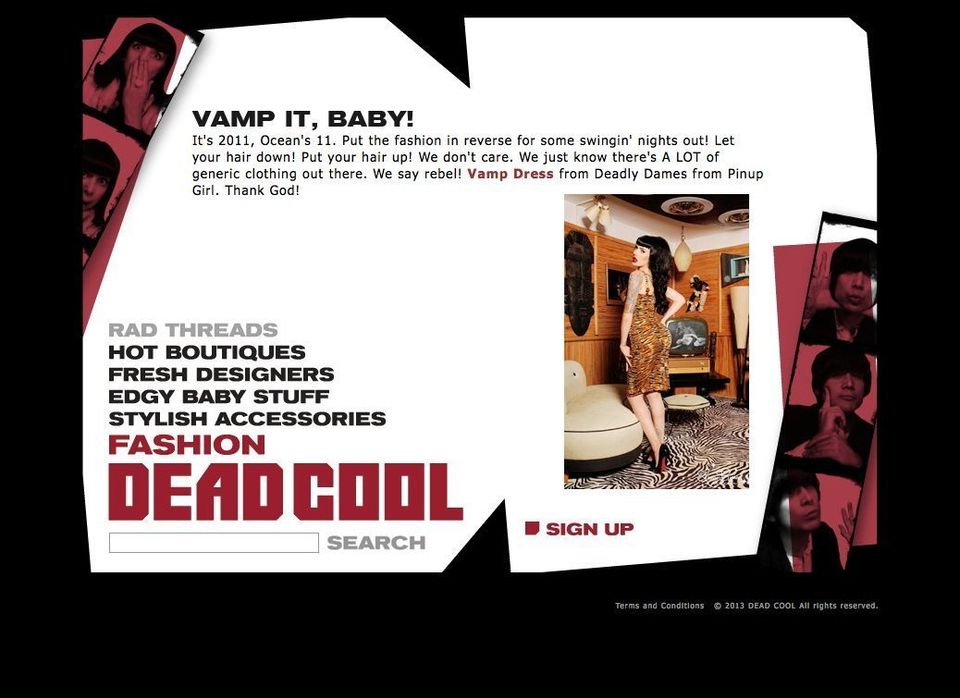