Artists such as Barbara Kruger, Jenny Holzer, and Ed Ruscha have famously used language to deconstruct the icons and apparatuses of modern society. However, rather than deconstructing the power structures inherent in language, a new generation of artists is using the written word to construct meaning of a different order. Quieter, more personal, or less teleological, the text in these photographs is fragmentary and open-ended. The images ask us to consider language, yes, but they also ask us to consider things like personal experience, loss, and feelings like boredom or shame. In most cases, the words are quite sculptural, having literally been constructed in order to exist in the photograph.

Shannon Ebner constructs text out of cardboard, making Hollywood sign-esque block text in the middle of nowhere. In the case of "Ampersand," Ebner explores the interstices between language's structure and meaning. A giant ampersand, it states/asks, "And...?" as if to say, what's next? What's the big deal? Her "USA," part of the "Dead Democracy Letters Series," proclaims a personal, physical reaction to Bush-era politics, shouting "NAUSEA" into the landscape.

Louisa Van Leer's "Hollywood No. 3," a Hollywood sign carved out of a paper bag, both pays homage to and plays with Ruscha's legacy. Because the text is upside down we read both "Hollywood" and "Hollymood." In the same vein of homage/undoing, her photographic record of the mileage count in her grad school pilgrimage to see Robert Smithson's "Spiral Jetty" asks us to consider the mundane inherent in the construction/deification of the monumental.

Marya Alford and Augusta Wood both use literary references in their sublime images. There is something deeply personal about these works, describing, as they do, intense moments of individual experience, albeit those of fictional characters. Alford transcribes quotes from literature into Braille, and then painstakingly physically recreates that Braille text in everyday scenes using sand or grains of rice. Wood writes, carves, or projects both personal writings and snatches of literature into the scenes that she photographs. With a light touch, both artists play with the interpretive similarities and disjunctures between reading text and looking at photographs.

Ginny Cook's "Laguna Beach Live Forever" raises the specter of Hollywood (or reality television,) and its associates: wealth, privilege, youth-obsession and glamour. Dark counterpart to the fantasy high-school experience portrayed in that eponymous reality show, "Cry Pansy" is one of the most political and timely images I've chosen, bringing to mind the adolescent homophobic bullying that has recently been such a tragic part of our national consciousness.

In Julie Shafer's mixed media installation, "Are we there yet" is projected via overhead projector onto a stormy ocean horizon. The question instantly summons the feelings of being a child in the back seat on a long car trip, bored and powerless. But, of course, it also asks the question of photography itself- has photography finally arrived at some sort of end-state? Looking into the limitless, dark horizon, with nowhere further to go, we might be tempted to say yes. But in my mind, it's also a challenge to go further, and to keep experimenting with the form, playfully, and with intention.

Under Construction: Photography and the Word is part of a series of online galleries on contemporary art, curated by Carrie Yury, a Los Angeles-based artist. The first installation of this series was Reinventing Photography: Hybrid Photographic Forms.

PHOTO GALLERY
Under Construction: Photography and the Word
Download
Calling all HuffPost superfans!
Sign up for membership to become a founding member and help shape HuffPost's next chapter
Join HuffPost 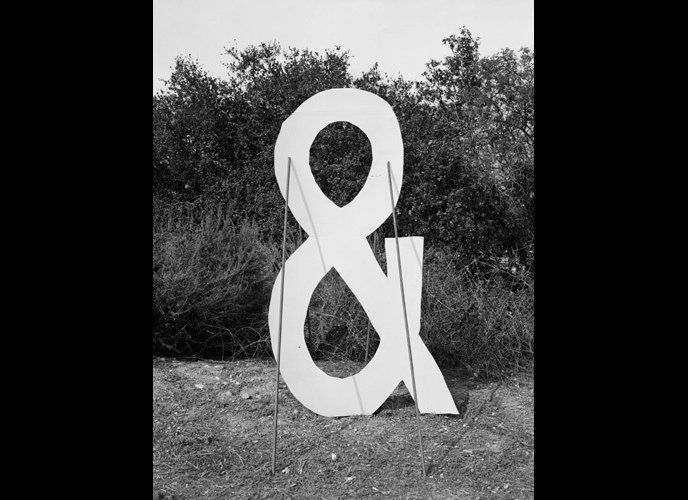