What a start to a love story. Scruffy, humanity-parched Tom (Sean Thomas) wanders in the desert. He envisions an angel. Like a Lascaux caveman-artist, he paints that vision on a rock. Later he finds her avatar Ellie (Alana Dietz) at work in a diner. He knows all about her. Was it the vision or something else? She's mortified but intrigued. Is it this stranger's appearance or something else? By the end we still don't know if it's profane love or something far, far more sacred. 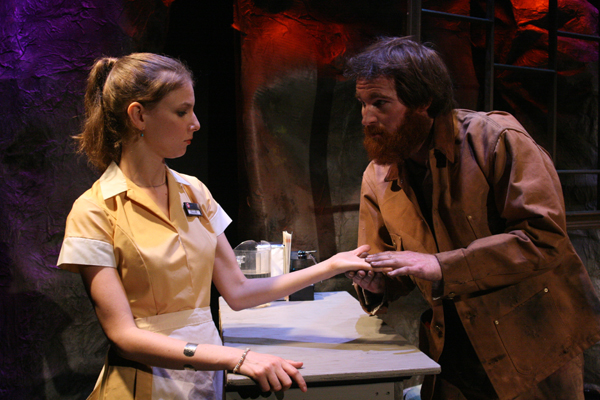 Directed by Kiff Scholl, the world premiere of Raymond King Shurtz's "Under the Desert" at Hollywood's Lounge Theatre is an armrest-gripping story that investigates, indeed, confuses, the line between sacred and profane love. Think of a collaboration between Albert Camus and Carlos Castenada. It's a simple production (the set, the clipped dialogue, the abbreviated gestures, the hermit lives of the two protagonists). But its simplicity belies a slew of pertinent unanswered (and unanswerable) questions. The production elicits stupefaction, admiration, delight and, most of all, empathy.

It pairs a literal desert (hot, lonely, fearful) with a metaphorical one (a disorienting and expansive source of hallucinations). The characters stagger through both. It's an uncomfortable tale that opens up and reveals character trajectories but never anchors them. It's value? It propels us forward, living the questions (That's what Rilke wrote to a young poet who was asking answers to Big Questions). It encourages us to watch them posed and played out up there on the stage while we examine the sources (and validity) of our own epiphanies. It begins as a boy-meets-girl story. Then it quickly becomes a drama that shows the paucity of language to articulate and heal emotional wounds. How could language do otherwise, when the issues are muddled by personal tragedy? It circumscribes Ellie's universe by the walls of her diner, Tom's by the limitless desert. Both are mediated by Joel Daavid's floating window, which serves as a portal to madness and memory. 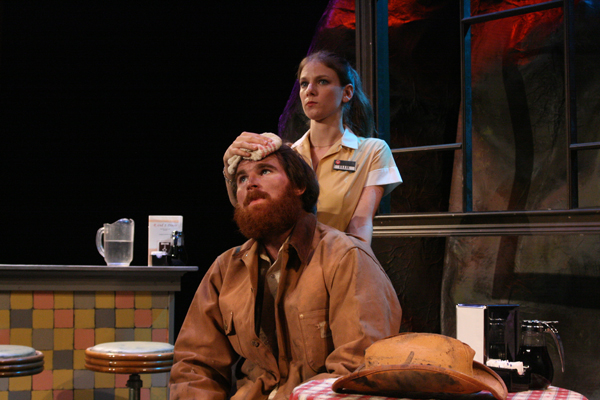 We carry crosses for the performances. For the way the actors more or less put their past behind them, until Tom's appearance at the diner opens up a Pandora Box, after which time all hell broke loose. Though it's not all apparent at first, in fact, it's the farthest thing from anyone's mind, Tom and Ellie are the same person. They both have father issues. He murdered his father; a licentious priest conceived her. They share a history, which only becomes apparent at the end. They have the same needy, beady eyes, the same loose hold on things mortal. His seemingly incoherent madman-or-saint conviction plays right into her tinny tentativeness. They complement each other's scourged existence.

Thomas's Tom is stupendous. His portrayal of a discombobulated desert nomad is so complete, down to the inflections of voice, ticks, and gestures, that physically, emotionally, and spiritually, he reminds you of Heath Ledger's Joker. He makes his performance feel like received wisdom, not acting. It's no surprise to read how he spent 58 days in the Utah desert, the better to literally get "Under the Desert." Mostly, though, it was the authority, albeit cockeyed, with which he spoke. He suggests Florentino Arizo in Garcia Marquez's "Love in the Time of Cholera," channeling the Holy Spirit. Dietze"s Ellie was his perfect foil. If he's an oracle, then she's his acolyte, doubting but compelled by this charismatic nomad to take a chance on life and love. 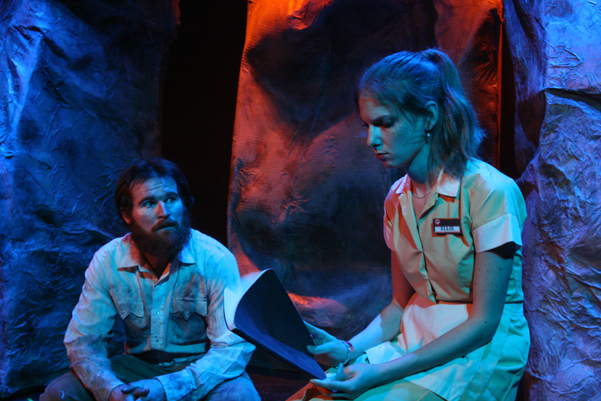 Love is messy because it's informed by our all-too-human past. That much we know. As this production shows, so is religious experience. When the two are paired, it's a divine and awe-inspiring, hot and holy mess. 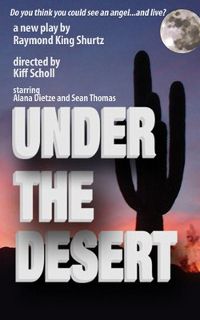