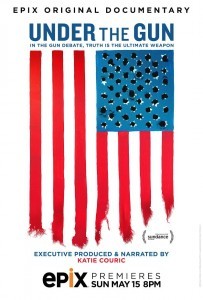 Guns. Where to begin? The very word is loaded, pun intended.

There is always a why, a reason, for even to the most horrific, mind-boggling and seemingly senseless of situations. Even when it's the murder of 20 small children in Newtown, Connecticut a few weeks before Christmas, 2012.

And Under the Gun, a documentary by Katie Couric and Stephanie Soechtig premiering this Sunday on EPIX and EPIX.com seeks to and succeeds in doing just this -- answer the heart-rending "How could this happen?" that we ask ourselves time and again when there's a Columbine, Aurora, Sandy Hook, Tucson and the daily incidents of gun violence in cities like Chicago and others across America.

A cooling antidote to the fever pitch of emotions involving gun ownership, legislation, control and violence, this documentary's level-headed, deliberate and painstakingly laid out explanations tells us why this keeps happening and what can and can't be done. And much of the why falls squarely at the feet of the leadership of the NRA.

As the debate is presented, those favoring stricter gun laws versus Second Amendment purists, we meet everyone on the spectrum -- from a young mother with both a baby and a weapon strapped to her torso to the parents of Danny Barden, the 7-year-old slain alongside 19 other children at his elementary school four years ago, who have made it their life's work to advocate for stricter gun laws and accountability from gun manufacturers. And everyone in between. 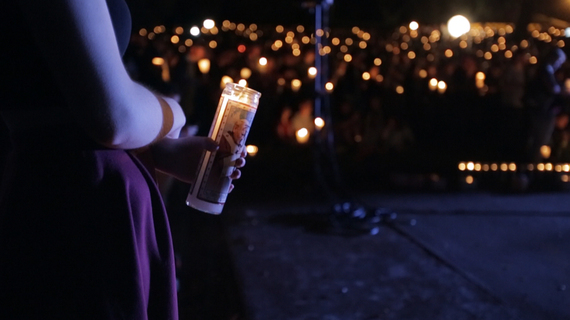 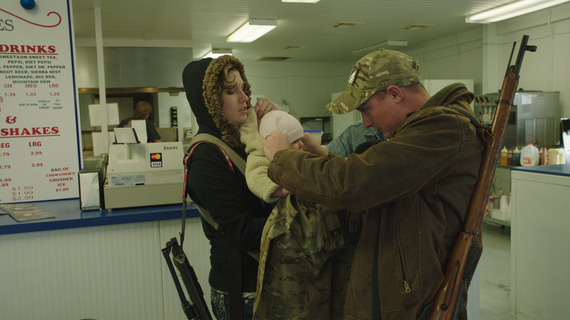 The facts pile up -- and they are astonishing in their totality:

Make no mistake, despite the even-handedness of this film as we hear from responsible gun owners who are shocked by some of the manipulations and loopholes of gun laws, there is blame and there is a deep passion on display. The NRA has check-mated every effort to control gun sales with well-financed legal maneuvers as well as instilled the false, Trump-like misinformation and fear in gun owners that 'they are trying to take your guns away" and the equally effective and alarming "the only way to stop a bad guy with a gun is a good guy with a gun".

Nancy Doyle Palmer: Why did you choose not to name or focus on any of the gunmen in the stories you talk about in Newton, Aurora, or Isle Vista?

Katie Couric: On behalf of many of the victims and really the public writ large there's a movement towards not talking about the perpetrator in these terrible crimes because it feels like we are giving these people too much attention, even glamorizing them in some way, or opening up for the possibility of copycats.

Stephanie Soechtig: None of the families we interviewed requested it but there is definitely a "No Notoriety" campaign among many of the victim's families.

NDP: What about the decision not to show Katie's face in the documentary except for one scene where you are mostly obscured in group interview with gun owners?

KC: We didn't want to distract from the core story and I was perfectly happy to not be too front and center. I think it's more journalistic and less showbizzy when you do that.

SS: I think we decided early on that we wanted to distinguish the film from television work and not seem like a television news magazine piece. It needed to be more cinematic.

NDP: Katie, one of your most well-known interviews was when you covered the Columbine shootings the day after the violence. it was a deeply emotional time and issue for you, and really anyone who has covered gun violence. Where do you put your feelings at these times?

KC: For me it's become a collective experience of covering incident after incident, not just Columbine, but I also covered Virginia Tech and Sandy Hook when I was at CBS, in fact the Bardens invited me into their home that following Sunday where their whole family had gathered. I've also covered urban gunfire on a regular basis, too, but not as close as some of these mass shootings. Those experiences accumulate and I think it needs some outrage and some questioning about how this can continue to happen and why something hasn't been done about it. You see the outrage, then the outpouring of sympathy and acknowledgment of loss and the tragedy of it all but you don't see anything getting done. Nothing changes.

So when it comes to emotional experiences, especially loss, I learned how personally cathartic and healing it was for me to do something proactive after my husband died due to the colon cancer. So with many of these families, it's antithetical to the human condition to feel so powerless, so it was important for us to be able to help them channel their feelings to do this documentary.

NDP: Is it safe to say you all deliberately present the argument in a very low-key and well-reasoned way the NRA is responsible for the current state of stalled gun control laws and regulations as a way to counter the emotional climate of gun ownership and proliferation?

KC: I'm not sure I agree with that but I will say that we were sort of systematically deconstructing some of the arguments made by the NRA. To me, I think we wanted to take what is seen as a very black and white argument -- you know, you're either for us or you're against us and we wanted to give people more context in every way. Legislative context, historical context, and show sort of how we got to this point.

I think it was more of, "Okay, what are the things in place that are keeping us from coming up with some kind of regulation, or any kind of regulation, and what is this intractable argument and how can we approach it?" It's not a one dimensional issue.

I think both of us always begin these documentaries with the very simple question of why. Our first collaboration FED UP was to answer the question why do we as a society keep getting bigger and bigger and why are our children getting heavier and heavier. And this time, the question is with all of this horrific mass shootings and daily urban violence why hasn't anything been done and can anything be done that will have an impact?

SS: I'd like to interject that I don't think we lay it all on the NRA. We also lay it on congressional leaders and on voter apathy, too.

NDP: Do you think it's fair to say that the NRA is appealing to the same level of emotion and level of misinformation that sometimes Donald Trump has been doing?

KC: I wouldn't say that but I do think that some people feel that this staunch gun right position is a proxy for some of the things we're seeing throughout the county with anger and alienation, which I think is sort of interesting area to mine. And I'd like to also point out that we've been told by many gun owners, or at least by some gun owners after watching the film, "Thank you for representing our point of view." I think one of the strongest points we make is that 74 percent of the NRA membership favors universal background checks.

SS: It's so important when discussing the NRA to note that they only represent 5 percent of gun owners, right? So you're seeing between 90-95 percent of people who own guns not represented by the views of the NRA. Even within the NRA itself, there's a huge disconnection in what membership wants and what leadership is doing. I think the us versus them that has characterized the conversation for the last, what, twenty, thirty years has been a real disservice to law-abiding gun owners who really represent a huge segment of the population and who do have constitutional rights to own guns but want to do so responsibly. I hope that a lot of them will feel that this film gives them a voice.

NDP: Would you call Under the Gun advocacy journalism or journalism?

SS: I would call it filmmaking.

KC: I would say the only thing we're advocating for is a conversation.