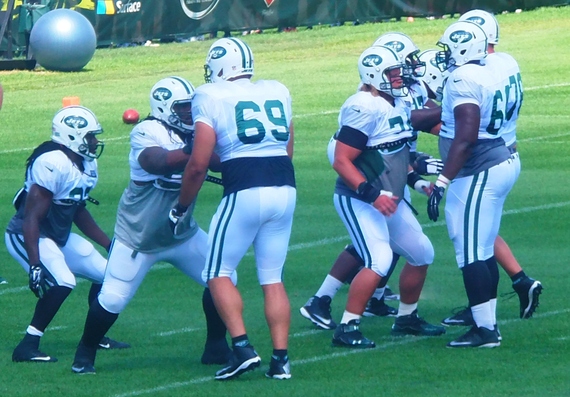 96 college underclassmen just declared their intentions to enter the 2016 draft, significantly beating last year's 74. The number of early declarers has been steadily increasing over a decade; the previous 10-year average was 50, with the highest number of underclassmen at 98 in 2014.

This year's continuing high number then begs the question for next year -- is it worth it for underclassmen, i.e. juniors and sophomores, to drop out of school early, with a potential reward of a multi-year, multi-million dollar contract, or do they do so at their own peril later on?

First, let's look at the draft's basic rules. To begin with, three complete playing seasons must have passed since the player's high school graduation. That means juniors and even some sophomores are potentially eligible. Draft-eligible players then request a "grade" from the College Advisory Committee, which basically serves as an evaluation of their prospects to help them inform their decision.

Until 2014, players could receive a draft grade from the board from 5 categories but in an effort to curtail the number of underclassmen requesting grades, the number of categories was cut to three -- 1st round, 2nd round, or stay in school. Given the record-breaking number of declarers this year, though, that action doesn't seem to have impacted the decision-making process as much as it was hoped.

Now, let's look at hypothetical Sean Smith, a junior at the University of Florida. He received a 1st round grade after an outstanding season. His family has been through economic hardship and he knows that an early pick in the draft would mean millions of dollars for him and his family. He also knows that, alternatively, if he doesn't declare and stays in school and plays as a senior, he runs the risk of injury and becoming ineligible for the next year's draft. It would seem an easy choice -- declare early.

But Sean is also the first person in his family to attend college and has maintained a consistent 3.2 GPA for 3 years, majoring in economics. Becoming a college graduate leading to viable, life-long career opportunities has been a dream that he and his parents have been working toward his entire life. Of course, a multi-million dollar contract is powerful incentive, but the same odds of his getting injured as a college senior increase dramatically as an NFL player, especially as a rookie playing against seasoned pros. Still in his 20s, with a career-ending injury and no college degree to fall back on, what profession beyond ESPN commentator can he realistically count on?

Still, the argument could be made that even if Sean were to get injured or even cut early in his pro career (think Tim Tebow), he always has the option of going back to complete his degree. But human nature being what it is, after living the life, albeit a short one, of a massively wealthy NFL player at the extremely young and impressionable age of 20 or 21, it's easy to see how difficult it would be for Sean to return to the mundane life of a college student, especially when he's barred from playing college ball.

Similarly, a 1st or 2nd round grade is vastly different from an actual early round pick. In 2010, Ole Miss QB Jevan Snead declared early, encouraged by his father and helped along by an excitable media predicting a 1st round pick. He went undrafted and never played a single down.

The lure of fame and fortune is strong and undeniable, and has specific value, especially to those student athletes who come from economically-disadvantaged backgrounds. USC linebacker and college All-American Jadeveon Clowney can attest to that. As a junior and the No. 1 pick of the Houston Texans in the 2014 draft, he signed a 4-year deal worth $22.272 million that featured a $14.518 million signing bonus.

But even some in the NFL admit to a preference for college graduates. Former Eagles coach Chip Kelly has said he prefers draftees with degrees. "No. 1, I think [graduating] shows you the intelligence factor, and No. 2, it shows that they're committed to establishing goals and following through on their goals."

A college education is worth so much more than acquiring an employable skill or gaining entry to a reputable profession. Working toward and earning a higher degree gives student athletes the kind of self-esteem that no amount of celebrity or riches can possibly match. It proves to them and others that they're capable of essential critical thinking and higher-level communication skills, regardless of background or experience.

Higher education is not something that can only be measured in economic terms, and student athletes, as well as their parents, deserve the chance to fully understand the risks, along with the rewards, of leaving college too early.