In the opaque world of diamond dealing even an elevator encounter has its unwritten rules.

Sometimes I feel like I'm in a movie. Being one of the few women in the world who can call myself a diamond dealer, I was recently standing in an elevator in the Diamond Exchange Building in Antwerp, Belgium. After passing 15-20 CCTV cameras, handing over my passport, leaving my finger prints and announcing myself to the security guards, I proceeded to the elevators.
I was only going up five floors. Just before the elevator doors closed, a man jumped in.
Neither of us batted an eyelash, but we did, however, nod distantly to one another in recognition of the fact that we were occupying the same space. Without turning towards me and still starring straight ahead, he suddenly asked:
"Buyer or seller?"

Without turning towards him, I instinctively answered:
"Buyer." 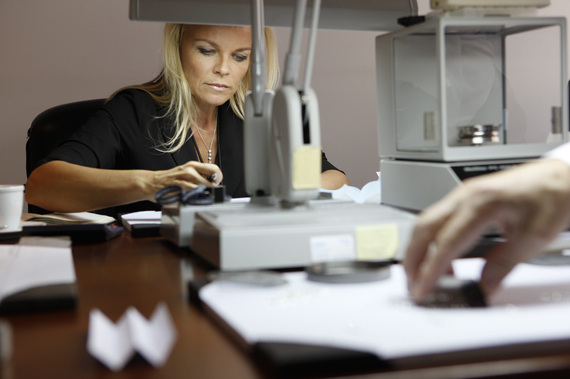 The fact that he even addressed me in the elevator was a rare break with diamond district etiquette. But his hunt for new clients was apparently more important than his scruples. And he was enough of a professional not to hand me his business card. His not giving me one signifies that he doesn't specialize in the diamond size in which I normally deal, which is 1-5 carat.

It is all about security
Antwerp Diamond District is the area where 80% of the world's diamond trade takes place. It is a small area, less than one square kilometer. With 4 diamond stock exchanges and 1500 trading offices, this translates to a turnover of more than $ 42 billion a year. The diamond trade covers 8% of Belgium's exports and about 30,000 people are directly or indirectly involved in the Belgian diamond sector. 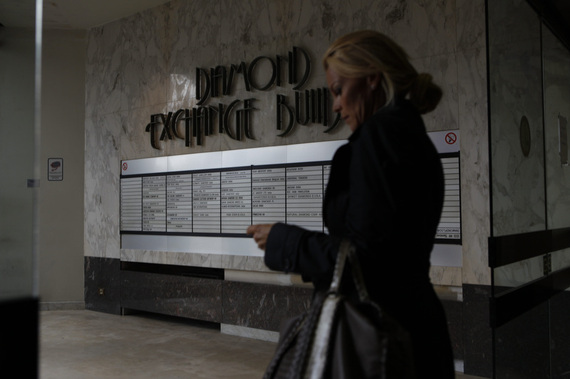 Why Antwerp?
It was in this area that special abrasive -and polishing techniques originally were developed. 8 out of 10 rough diamonds are currently traded on the 4 diamond bourses. It is estimated that half of all polished diamonds are passing through here.

Since the area is classified as 'high risk' for both political and economic reasons, the safety precautions are developing all the time. It is forbidden to drive in the street that even has a small police post at each end. It is also forbidden to run. Although it looks very much like any other dull and narrow street in a big city, the specially trained security forces, that are armed with machine guns and the military police as well as the cameras on the office buildings, reveal that this is one of the most protected and monitored areas in Europe.
Each building has security guards at the gates and all offices are monitored and locked with several security codes.

Breach of etiquette
As a diamond dealer, there are a number of unwritten rules that must be observed within the diamond bourses. First of all, there is no manual or code of conduct, but you quickly come to understand how to behave, if you wish to be accepted as a pro. To be considered for a license to deal on the diamond bourse, one must:
Present two letters of recommendation from two "godfathers" (two full members of the bourse, residing in Belgium, "who are deemed to be well informed of the good moral and financial reputation of the proposed candidate and will supply, upon request, all necessary information to the Board of Directors"). You must never have been convicted of a crime and you must have been active in the diamond trade for several years.

And no matter what you do, you do it discreetly. One of the unwritten rules appears to be: "If you act as if you're not here, then I'll act as if I don't see you." And after our business transaction is concluded, I'll pretend I've forgotten all about you.

Integrity above all
When I left the elevator I couldn't help but smile. This is one of the reasons why I appreciate my job so much. No small talk - no nonsense. You just go straight to the point. Had this been any elevator in any other business, I wonder how he would have managed - before we arrived on the fifth floor - to ask about my nationality, my profession, the duration and purpose of my visit, who I was going to see and how many children I have.

Once in a while it's rather liberating to be on home turf where integrity, trust and traditions are the hallmark qualities, where all superfluous talk is unnecessary and an elevator pitch can be pared down to just four words.