Nineteen years ago this April, iconic "Friends" couple Ross and Rachel first said the words "I love you." Through the eight seasons that followed, their relationship became one of the most frustrating/rewarding/crushing/beautiful will-they won't-they's in TV history.

The big moments of the Ross-Rachel saga have been celebrated plenty since "Friends" went off the air in 2004. ("When were you under me?") But as any true TV romance obsessive knows, the best moments in a serialized relationship are often quiet and unexpected. They're not the big kisses, breakups or Vegas weddings, but rather the smaller gestures.

To celebrate the Ross-Rachel love that was/wasn't/was?/wasn't/was ... we put together a list of the couple's 10 most underrated moments, ranked from our least to most favorite. On with the lobsters!

10. Rachel shows Ross her keepsake box. (Season 4, Episode 8, "The One With Chandler In A Box")
Ross and Rachel are no longer together when Ross learns Rachel is a serial gift-exchanger. He gives her a hard time about her lack of sentiment until Rachel pulls out her box of special items and shows him the things she's kept from their relationship. That includes a movie stub from their first date, an eggshell from the first time Ross made her breakfast in bed and a bone from the museum when they first spent the night together.

9. Ross has a eureka moment. (Season 6, Episode 2, "The One Where Ross Hugs Rachel")
Ross lies about getting his marriage to Rachel annulled, which Phoebe claims is because he's still in love with her. Ross insists over and over again, fully convinced of his own words, that he is not. But in the last moment of the episode, Ross finds Rachel crying and immediately goes in for an embrace. With his arms around her, a lightbulb literally figuratively turns on over his head.

8. The "What are we?" prank gets real. (Season 8, Episode 21, "The One With The Cooking Class")
In the last few seasons of "Friends," the Ross and Rachel back-and-forth has gone on so long that even the characters can make jokes about it to one another. Toward the beginning of this episode, Rachel keeps talking baby prep to Ross while he's urgently trying to pee. When he's finally about to make it to the bathroom, she stops him to ask about the state of their relationship -- they live together, they're having a baby, what's the deal? Ross is caught off guard, until Rachel says she's just kidding! She was just pranking him while he had to pee!

This little fun prank takes a turn at the end of the episode after Rachel seriously asks Ross not to date for a while because of the baby, and he agrees without a fight. Then, he tries to reverse the prank on Rachel. She doesn't realize it's a joke, though, and actually says she would maybe consider making their relationship something more. Ross quickly clarifies he was pranking, and Rachel acts like she knew that all along. But, um, this moment is telling. 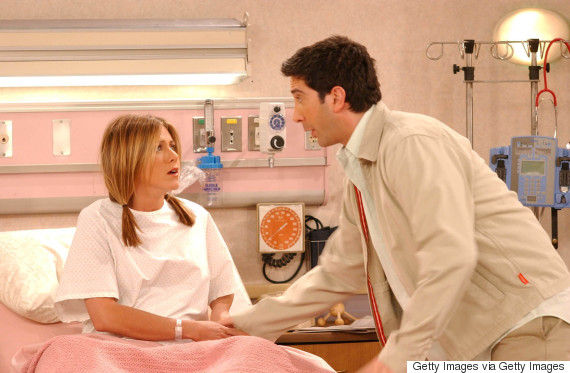 7. Ross misses his Discovery Channel TV moment to help Rachel. (Season 3, Episode 21 "The One With a Chick. And a Duck")
Just a handful of episodes after the famous "we were on a break" breakup, Ross is very jazzed to appear on the Discovery Channel until an injured Rachel, who doesn't know about the TV opportunity, asks for help. Without mentioning the TV spot he's missing, Ross takes her to the hospital and gives her much-needed emotional support. When Rachel finds out about the Discovery Channel after Chandler asks Ross how it went, she is extremely moved by the gesture. It looks like she might kiss Ross until he breaks eye contact, says goodbye and dejectedly sits on the step outside her apartment door.

6. Ross doesn't want Rachel to date. (Season 9, Episode 9, "The One With Rachel's Phone Number")
While out with Phoebe, Rachel gives her phone number to a guy before realizing Ross will answer the phone at home. Unsure, as usual, of where exactly their relationship stands, Rachel orchestrates a plan for Mike, who is at home with Ross, to block the call. It ultimately doesn't pan out and Ross does answer the phone, but he never gives Rachel the message. 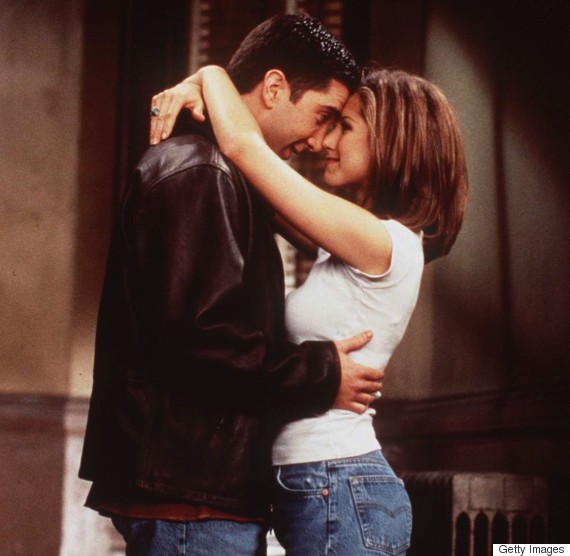 5. Ross tells Rachel how he would have proposed to her. (Season 8, Episode 18, "The One In Massapequa")
In Season 8, when Ross and Rachel are living together but very much not romantically involved, the two attend Ross's parents' engagement party and discover his parents told everyone that they got married -- instead of disclosing that Rachel is pregnant out of wedlock. After guests start giving them wedding gifts in the from of $ cash money $, Ross and Rachel spin tales to a captive audience about their faux engagement and wedding. Ross tells the story of how he supposedly proposed to Rachel -- in the planetarium, with lilies, Fred Astaire on the sound system and "Will you marry me?" written in the dome in stars. Later, Rachel, touched by the vision, asked Ross if he just made that up.

"Actually I thought about it when we were going out," Ross says. "That's how I imagined I would ask you to marry me."

"Wow," Rachel says. "That would have been very hard to say no to."

Ross diffuses the tension with a joke, but the question of the two of them together VERY SATISFYINGLY lingers.

4. Rachel hears Ross is marrying Emily. (Season 4, Episode 19, "The One With All The Haste")
Sigh. Ross and Emily announce to Monica, Phoebe, Chandler and Joey that they're getting married. After the announcement, Rachel emerges from her room, where she heard the news. The look on her face feels like two hands wringing your heart.

3. Rachel tells Ross to do whatever Emily wants. (Season 5, Episode 4,"The One Where Phoebe Hates PBS")
Ugh, the Emily storyline continues. Everyone remembers "Take thee, Rachel," but one of the saddest moments of this Emily-disaster arc comes after Emily tells Ross she'll only come to New York if he stops speaking to Rachel. Ross is torn up about what to do, and without knowing specifics, Rachel advises him to just do what Emily wants. The audience, who actually knows what's going on, basically sobs the whole time. 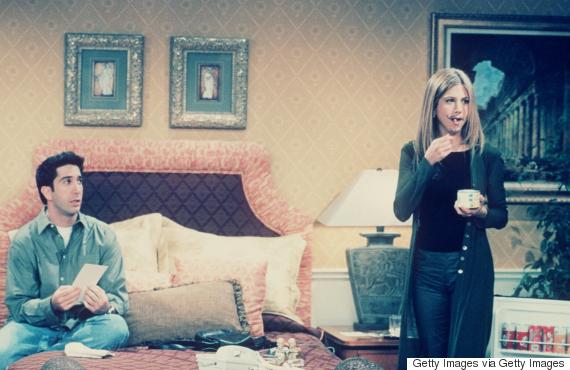 2. Ross reveals he's keeping some hope alive. (Season 6, Episode 14, "The One Where Chandler Can't Cry")
Reese Witherspoon obviously rocks as Rachel's sister, Jill. But no matter how hilarious she is, the episode where she tries to get with Ross is painful for Ross-Rachel fans, and for Rachel herself. Rachel claims she's not uncomfortable because she wants to date Ross, which at this point in the series seems pretty true, but because they have a huge history, which again, true. But at the end of the episode, Ross all but punches everyone watching in the gut when he says he stopped things with Jill on the off chance that something might happen again with Rachel.

"I don’t know if anything is ever going to happen with us again. Ever," he says. "But I don’t want to know that it never could. So I stopped it and she got mad and broke my projector."

1. Rachel states the obvious. ("The One Where Joey Speaks French," Season 10, Episode 13)
Ross heads back to Long Island with Rachel after her dad has a heart attack. But when she tries to get him to sympathy sleep with her, he won't do it because he feels like he'd be taking advantage. This leads to a conversation where they suggest maybe they should never have sex again. But Rachel tells Ross that with the two of them "it's never off the table." The conversation might technically be about sex, but Ross, Rachel and everyone watching knows it's their RELATIONSHIP that is never off the table.

BONUS: Season 10, Episode 16 "The One With Rachel's Going Away Party"
Further along in the Season 10 heat-up, Ross is hurt when he thinks Rachel doesn't have a pre-Paris goodbye for him. During their confrontation, Rachel reveals she hadn't yet said goodbye because it's too painful.

"I can't even begin to explain to you how much I am gonna miss you," she says. "When I think about not seeing you every day, it makes me not want to go. Okay? So if you think that I didn't say goodbye to you because you don't mean as much to me as everybody else, you're wrong. It's because you mean more to me."

Everyone remembers the kiss, but like, we can't gloss over the speech.

Happy "I love you" anniversary, Ross and Rachel! 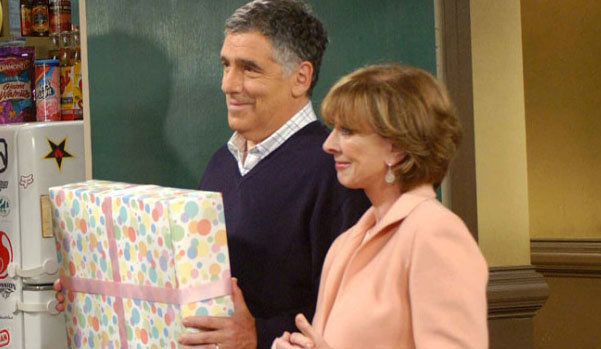