Why do we study history? It is often said that by considering our past, we can better understand our present reality. Like the proverbial sail boat in the middle of a lake -- without knowing where we have been, it can be difficult to know where we are -- and where we should be going. That's just one of the reasons that Gil Troy's new book: The Age of Clinton, American in the 1990s is such a good read.

We tend to think of American history in terms of decades: The 1920s were roaring; The 1960s a time of revolution. But for many of us, the 1990s feel like they were only yesterday, perhaps too recent to be branded with a stereotypic label. Troy presents these prosperous and tumultuous days as a political and cultural transition from a World War II generation and their traditional assumptions to the more open, pluralistic but morally chaotic world of the baby boomers. His book's central theme is that to a large extent, the U.S. became a reflection of the young, immensely popular, but ever human president who presided over the decade.

A noted and prolific American historian, this is Gil Troy's tenth book. Arguably, it is his best. Unlike earlier tomes which were more easily appreciated by academic historians or his most recent chronicling of Ambassador Patrick Moynihan's "moment" at the UN, a fascinating but ultimately esoteric, diplomatic story, The Age of Clinton is for everyone. It is good to remember that history can be this much fun. The prose sparkles with thoughtful and colorful stories and analogies. What might have been a 650 page volume is a most accessible and breezy 300 pager. This is largely due to Troy's uncanny ability to distill complex theories, convoluted events and turgid books to their absolutely essentials. 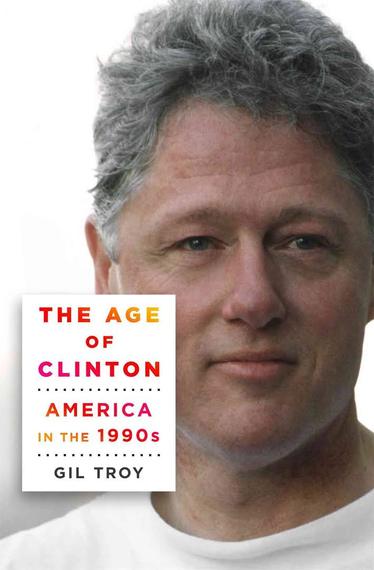 The book is foremost a political history, and a very thoughtful one at that. But it is much more. Troy brings his erudition and familiarity with popular culture to take readers on a year-by-year tour of the literature, music, films, trends, personalities and technologies that made the '90s such a special time. The book bounces back and forth between defining cultural, sociological and economic moments of the Clinton years and the undulated journey of the Clinton administration.

The result is a phenomenally comprehensive portrait of a very complicated decade. If someone was to wake from a ten-year, Rip Van Winkle slumber in the year 2000 - and want to know what they had missed, "The Age of Clinton" offers the ultimate response. Presumably, when today's children who did not live through Oklahoma City bombing and Beverly Hills 90210 produce a new generation of historians and history lovers, this book will offer them the definitive presentation of the 1990s.

Like the best kind of history book, it indeed provides innumerable insights about how we got to where we are today. If one is to understand the astonishingly rapid change in public perceptions of gays and gay marriage, it seems that the 1990s holds the key. (In 1990, three-quarters of Americans were intolerant of homosexuality. But Troy explains how all that changed after eight years of constant exposure to Clinton innate tolerance, and expectation that Americans suspend judgmental views about other peoples' sexual conduct.) At the same time, one can also learn how Yahoo! lost to Google as the planet's definitive search engine ("Yahoo' began with the now-anachronistic assumption that Internet users were trolling around exploring, rather than consciously seeking out information.") Readers are reminded of how the "blue" and "red" state characterization arose and how today's paralyzing and poisonous political polarization began.

Among the endless array of fascinating facts that Troy digs up from the period, there are plenty of warning signs about the direction Clinton's increasingly affluent society of the 1990s was taking. By the 1990s, parents in U.S. averaged six hours a week of shopping with their credit cards and only forty minutes a week playing with their children. In 1965, fashion models were 8% percent skinnier than the average American woman during this time but by the 1990s, the gap had grown to 23%. When the 1990s ultimate leading man, Richard Gere actually tried to make a serious cinematic statement and challenge China's human rights record, the audience turned off: the film Red Corner was his one box office flop of the decade.

Rather than merely collect interesting anecdotes and figures from the decade, Troy invariably links them to what was happening at the White House. America's new openness with sex had unexpected benefits. The 20% drop in abortions during the Clinton years was probably due to the improved availability of contraception. But Clinton's own behavior did to little stop the drift away from fidelity as the foundation of the family values that he so espoused. For African-Americans, this meant that by the end of Clinton's decade, only a minority of families would be conventional two-parent households. A particularly thoughtful evaluation of Harry Potter's 1997 debut ("the greatest British cultural invasion since the Beatles and James Bond") is followed with observations about Bill Clinton's own political wizardry in shepherding an agenda that included highly effective welfare reform and peacemaking in Ireland.

Ultimately, Troy is ambivalent about Clinton and his legacy. On the one hand he celebrates the middle road that Clinton forged, rejecting both the historic weakness by Democrats for big government and the callous Republican faith in free markets. The spectacular economic results of the Clinton administration speak for themselves: 20 million new jobs; the lowest unemployment rate in 30 years; an 8.3 percent increase in real wages; the balancing of the national budget and ultimately a 237 billion year surplus.

President Clinton's achievements were not just about prosperity. Troy seems to most admire his uncanny ability to speak frankly to Americans and challenge them to build a more ethical society.

Hence the book opens with Clinton's bold 1993 presentation to five thousand African American ministers, arguing that Martin Luther King did not "live and die to see the American family destroyed.... thirteen-year old boys get automatic weapons and gun down nine-year olds just for the kick of it...." or to see: "people destroy their own lives with drugs and build drug fortunes destroying the lives of others". The crowd roared its approval.

Acknowledging his own historic "anti-Clinton" bias, Troy tries to solve the problem of being overly sanctimonious in chronicling the Lewinsky affair by directly quoting Clinton's own contrite apology: "It was wrong for me, wrong for my family and wrong for her... I was disgusted with myself for doing it." But in the end, unlike the forbearing U.S. public he seems unable to forgive the president for his moral lapses and lack of self-control. The book cites a 1998 poll during the peak of the Congressional onslaught, where 84% of the American public said it was possible for someone to be a good president "even if you disapprove of their personal life". Although he does try, clearly, Troy is among the 16% who can never really forgive Clinton's imperfections. Troy himself quotes Abraham Lincoln's insight in this context: "Folks who have no vices have generally very few virtues". Yet, he still is unable to embrace Clinton, who had plenty of both.

The result is an almost obsessively need to balance any paragraph with accolades for the man and the remarkable achievements of his presidency with passages disparaging his personal ethics. One typical sentence: "Bill Clinton brought joy, exhilaration exaltation inspiration to the American people; but he also brought shame, anger, frustration, disappointment, confusion and despair." This "even-handedness" may make it easier for Republicans to digest the book. There are times, however, when the author's need to yet again present a "but on the other hand...." passage becomes tiresome.

Troy is justifiably disappointed about the kind of progress that could have been made had the Clinton presidency been free of scandals. Looking back, the litany of alleged improprieties really was relentless -- Whitewater real estate controversy and Paula Jones' harassment allegations to the Lewinsky debacle and the questionable pardons given and glut of gifts elicited in Clinton's final days on job. The book correctly notes "Undermining a presidency that truly could have been great is a greater sin than undermining a presidency destined to be mediocre." As the recent Climate Conference in Paris reminds us, a wounded Clinton's inability to get any kind of Congressional support in 1998 for a U.S. global warming strategy meant that addressing climate change internationally would wait for at least a decade longer. Unfortunately, the greenhouse gasses released in the interim will be warming the planet for hundreds of years. Yet, in the final analysis the account that Troy himself presents confirms that Clinton's was anything but a mediocre presidency that even his intermittent stumbling couldn't sabotage.

Given Hillary Clinton's present position in the polls, one can't help read the Clinton story without wondering about how a second round of Clinton presidencies would look. Troy is far more sympathetic towards the "first lady" and first "co-president" than he has been in previous works. The book chronicles how time and again, Hillary's toughness and intelligence would save her husband's presidency. It was Hillary who coined the key phrase and narrative of "the vast right wing-conspiracy", that allowed liberal Americans to close ranks with the embattled president during the impeachment hearings. She told the Chinese and the world that "women's rights are human rights" and reminded Americans that it takes a village to properly raise children. Ultimately, most Americans came to respect (if not adore) their first lady, and her decision - as she explained in the famous 1992 interview -- "not to stay home and bake cookies".

Whether or not voters will allow Hillary Rodham Clinton to continue the ambitious agenda that her husband tackled twenty-three years ago remains to be seen. But, as The Age of Clinton makes clear, she, the United States and the world will surely benefit if Bill Clinton receives the opportunity to bring his formidable talents and vision as a co-president to the White House with her.