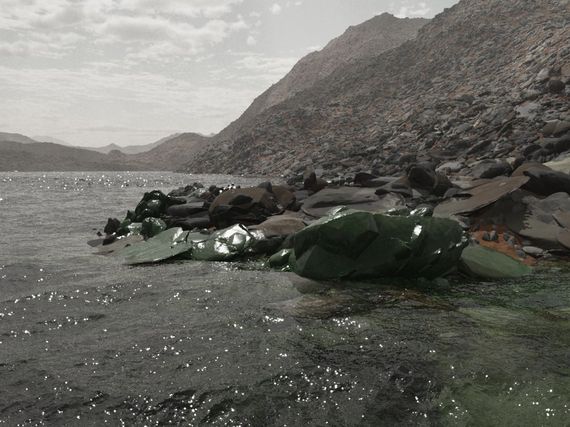 In this first of a series of articles to come on the scientific search for extraterrestrial life, we explore the magical place around stars called the Habitable Zone. Known by another name, the "Goldilocks Zone", this location is prime real estate for a planet to occupy. For "Exoplanets", which are those planets that circle other stars, the possibility that life as we know it exists there could be maximized if the planet's orbit falls within this habitable location. The zone is exactly that location that is not too hot and not too cold where liquid water can exist on a suitable planet. Looking at Earth for a moment, as we have all learned and confirmed life began in earnest in the oceans. Water is critical to the process if not simply because it allows for the mixing of many disparate materials which can under certain circumstances create the building blocks of life from which we are all composed. Having come from the oceans, to this very day our own bodies reflect the salinity of the ancient oceans from which our ancestors arose. We literally carry around a vestigial ocean environment within us. It is an odd thought to ponder. But water wasn't always in liquid form on Earth. Early on, the Earth's atmosphere was so dense and hot after formation that water vapor could not condense and fall as rain. Once that finally happened, and with new evidence indicating that it may have happened earlier than thought, innumerable cycles in both the thinning carbon dioxide atmosphere and deep in the growing oceans provided opportunity for life to arise.

Looking at our own Solar System helps us understand how the placement of an Exoplanet within the habitable zone of its star will drastically affect its climate. Venus sits just outside our habitable zone but its close to the inside edge. The differences however between Venus of today, once thought to be a 'sister planet', and the Earth couldn't be greater. Venus' atmosphere is dense, as Earth's once was and to this day has crushing volumes of carbon dioxide in its atmosphere as ours once did. Among other issues the planet faced, it was also much closer to our young star. Venus could never cool enough to allow any rains that may have fallen and oceans that may have formed to last for long. It is now thought that the planet may once have had large oceans and for a time, perhaps less than a billion years, may have been habitable. This conclusion comes from data showing us that Venus has rocks with a granite-like composition which require water to form. Any oceans on Venus though didn't last long. Part of that reason certainly has to do with its position just beyond the inside edge of our Habitable Zone. In such a spot where the Sun's rays are far more powerful and radiation effects more intense, a runaway greenhouse effect was induced raising the surface temperatures eventually to the point where the water boiled away. Water vapor rising in the atmosphere was likely destroyed by the powerful solar radiation and lost to space.

On the other end of the habitable spectrum we have Mars, sitting outside the habitable zone's outer edge. Mars too may once have supported life and we know now that it did indeed have vast oceans that made it relatively habitable for a time. The situation on Mars although very different from Venus was short lived as well. For many reasons we will discuss in later articles, Mars lost the bulk of the atmosphere it had acquired in its early development and much of the water was lost to space. Mars does have water still, but it's trapped below the surface in large ice sheets and bound up in minerals below the surface. Looking at Venus and Mars tells us that had Earth been slightly closer or farther away from the Sun we may have developed quite differently if at all.

Currently researchers have identified over 1800 individual planets circling other stars with thousands of additional candidates to verify. A fair number exist with other planets in their star system, making the concept of "other Solar Systems" a moot point. They do exist. But we all knew that already because we watched Star Trek. Actually, considering that in the fictional Star Trek Universe there are millions of inhabited worlds that are part of the "Federation of Planets" it makes you wonder if we are actually heading in that direction for real, having been somehow remarkably prescient about the many worlds that await us in the Universe. In reality, a non-trivial number of Exoplanets have been found orbiting in stars' Habitable Zones. Some are close to the inner edge, others near the outer edge and a few smack dab in the middle. Upon examining those few planets we have found in Habitable Zones and extrapolating an estimate of Earth-like planets that may exist in our several hundred billion star Milky Way galaxy alone you get a number in excess of 17 billion. In fact, it appears very likely that there may be more planets in general than stars in the Universe. It makes me wonder if we may already be part of a "Federation of Planets". We just don't realize it yet.

So the question is if life arose HERE could it have happened elsewhere on a suitably placed planet? The answer reveals why Exoplanet study is extremely important to us. It is likely that other life of some form certainly exists. There is reasonable consensus in the scientific community that this is indeed possible. Intelligence is another path life could take but its not a guaranteed destination. Personally, I believe it likely especially when we consider those 17 billion possibilities. Should we find habitable zoned planets which have an atmosphere of water vapor and oxygen, we should be very tempted to send a probe there when we reach that capability milestone. After all, if UFOs are visiting us HERE, why can't we send one of our own THERE?

Next time: More of the science that will find ET!