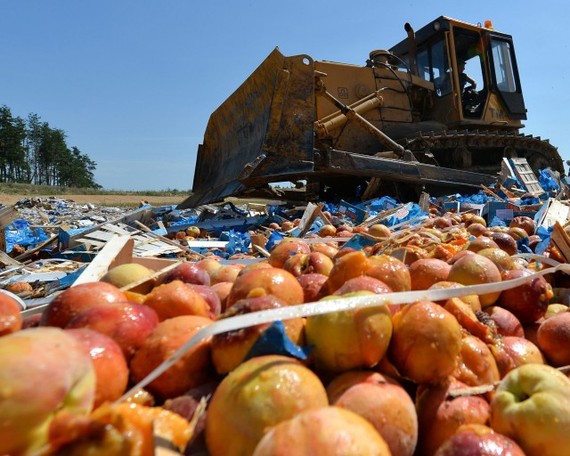 The Paleo Diet has finally been knocked from its perch as the stupidest food trend of the twenty-first century, replaced by an even stranger phenomenon: the Russian government's mass, televised destruction of banned imported food.

On July 29, in response to American and European sanctions against the Russian Federation, President Putin signed a decree calling for the public execution of contraband meat, cheese, and vegetables, to take effect on August 6. The week since then has seen the ongoing spectacle of the crushing and burning of hapless dairy products and lush vegetables that were too ripe to meet such a terrible fate.

Cloudy with a Chance of Meatheads

Meanwhile, Sputnik International, part of the Russian Federation's "news" services aimed at a foreign audience, responded to the events in a truly bizarre fashion: with an extended article denying the reality of the Holodomor (the 1932-1933 Ukrainian famine engineered by the Soviet leadership).

That was on August 9. The next day, Sputnik did cover the destruction of the imported food, in an opinion piece entitled "Why Russia Is Not Rising Up Against the Destruction of Parmesan." Sputnik chides the Western media for whipping up nonexistent outrage,noting that "the reaction in Russia has been considerably more mixed. In a country where 90 percent never tried jamon serrano, arguably the most famous sanctioned product because of its association with the high wealth of its consumers, the biggest issue has become one of efficiency." Giving away the food to the poor or to orphanages would be impractical, and in any case the food no longer has any health certification. The biggest concern, apparently, is how to burn the food in an environmentally friendly fashion.

Four days later, Sputnik gives us an amusing human interest story: "Millionaire Son Burns $245k Ferrari to Make Dad Buy New One." An unnamed 19-year-old Italian rich boy, who "reportedly has 'no less' than 15 other luxury vehicles and receives an allowance of 5,000-10,000 dollars a month from his father, was not satisfied with this "obscene excess," and torched a three-year-old car that simply wasn't good enough anymore.

So in the course of food-burning week, Sputnik moves from Holodomor denial to downplaying the burning to a story about a burning Italian car. What is going on here?

To be clear: I am not arguing that this sequence of articles was deliberate, or that the editors of Sputnik saw any connection between the Ferrari story and the banned cheeses. This is not the work of some ladder-day Dr. Goebbels; instead, it cries out for help from Dr. Freud. Some of Freud's most famous patients included the Wolf Man and the Rat Man. Now they are joined by the Stinky Cheese Man.

What Sputnik is doing is, I believe, entirely unconscious. The mass destruction of food is too unsettling to be ignored leaving a discomfort that must express itself indirectly through hysterical media symptoms. So Sputnik speaks of a long-ago famine (in Ukraine, of all places), denying that it was the work of the state. And rather than deal with the "obscene excess" of burning food, let's talk about a spoiled rich European guy burning a luxury car.

Sputnik is responding to an event that is profoundly troubling, but for reasons that are not easy to pin down. In a rare moment of candor, Putin's press secretary, Dmitry Peskov, admitted that the destruction of the imported food might be a "visually disturbing spectacle." Why, though, is it so disturbing?

If we follow Sputnik's logic of class warfare, part of the problem is the stark, visceral rebuke to the values that made Putin's first two terms so successful. Russia in the early 2000s functioned under a tacit compact between the rulers and the ruled: leave the politics to us, and we will let you live comfortably. Buy whatever you want to buy, watch whatever you want to watch. All talk of ideals and greatness aside, consumption was not the enemy. Consumption was the Putinist success story.

Yet this only scratches the surface. Many have noted the oddness of the mass destruction of food in a country with a long memory of famine (and particularly during the Siege of Leningrad, Putin's home town), suggesting that we look further back in Russian history for an explanation. But the cheese burning evokes multiple historical time frames at once, accruing an uncanny power from all of them.

Moreover, there is something profoundly human about food, rendering its destruction inhuman. It is not just that the mass crushing and burning of food might recall the mechanized mass slaughter of humans that defined the twentieth century. The sheer wrongness of destroying food is directly link to the rightness of eating it.

Consider this: what is food for? It may be beautiful, it may be the result of hours of labor, but our response to it is to tear it apart with our teeth, let our body break it down with a variety of unpleasant acids, and excrete it as something generally considered disgusting. To destroy food is to acknowledge its eventual fate. It is the ultimate expression of the desire to cut to the chase. Taking a wonderful meal and flushing it down the toilet is simply eliminating the middle man.

This is the same logic that Soviet writer Andrei Platonov so brilliantly exposed in his novels Chevengur and The Foundation Pit: if the final fate of all people is to become corpses, Stalinism will eliminate decades of human life in order to overfulfill the plan in corpse production.

Yet there is also something telling about the way in which the food is being destroyed. Crushing and burning food is a grotesque parody of consumption and digestion. As such, it becomes a perfect symbol of an overreaching state, arrogating the most basic human processes to a vast, inhuman mechanism. It is Stalinism as eating disorder, binging and purging on camera.

But it is also the apotheosis of the Putinist obsession with sovereignty: borders must be policed, state power must be exerted at all cost. If the state, rather than the citizen, is the most important subject, then the state can take on the job of eating and excreting.

And as for everyone else? Let them burn cake.