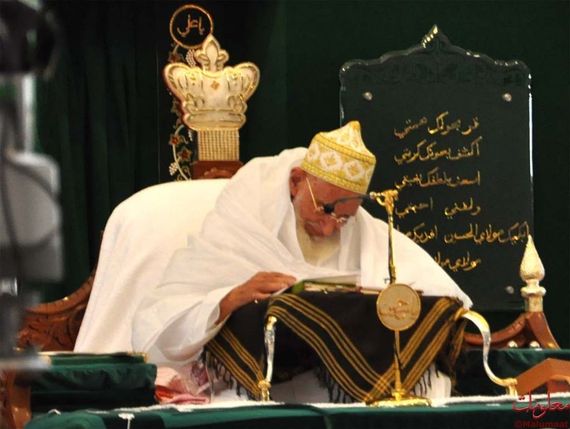 The passing of Syedna Muhammad Burhanuddin, the 52nd da'i al-mutlaq of the Dawoodi Tayyibi Musta'li Ismailis, Friday in Mumbai left a community of approximately one million adherents mournful and bereaved. During his 102-year life, he continued the work of the previous da'i, his father Syedna Taher Saifuddin who passed away in 1965, contributing to the establishment of a number of educational institutions for the promotion of literacy and higher education as well as hospitals and community mosques. At 53, when he inherited his father's mantle, Syedna Muhammad Burhanuddin continued the responsibility of providing guidance in both spiritual and worldly matters for a contemporary world, a tradition also entrusted to his ancestors, all of which trace their lineage to Prophet Muhammad, Islam's final Messenger. In doing so, the da'i also helped to ameliorate the status of the community's less advantaged members and is succeeded by his 70-year-old son Syedna Muffadal Saifuddin, who has inherited the mantle of spiritual leadership of the community.

This small but scattered Shi'a Muslim community can be found throughout the world, but is concentrated in the Subcontinent and Yemen as a result of missionary activities that began in the 10th century during the reign of the Fatimid Caliphs in Egypt. Known more commonly as the Bohras, the Dawoodi branch of the Musta'li Ismailis are believed to have taken their more colloquial name from the Indic term "Vohra," a word possibly pointing to their caste-origins as Hindu merchants and peddler-traders before their adoption of Islam nearly a millennium ago.

For many, however, Shi'a Islam and its beliefs are difficult to grasp. Even Muslims outside the Shi'a persuasion are not always able to articulate or understand the ways in which models of leadership developed after the death of the Prophet Muhammad in the early part of the 7th century. Like Sunni Islam, Shi'a Muslims are a diverse cohort whose communal histories, geographies and relation to power, have led to great diversity amongst them in their practices and theologies. While estimates vary widely, most studies suggest that Shi'a Muslims make up about fifteen to twenty percent of the world's 1.6 billion Muslims. Although present in the majority of countries where Muslims live, they are concentrated in Iran, Azerbaijan, Iraq and Bahrain -- where they form majorities, as well as Yemen and Lebanon. There are also significant minorities in Turkey, Qatar, Pakistan, Afghanistan, Saudia Arabia, Tajikistan and India.

Amongst the Shi'a, there are three main interpretive schools -- the Ithna Asharis, the Ismailis and the Zaydis. All three share in a common belief and view of history that authority did not cease at the death of Prophet Muhammad, but continued through the divinely mandated designation of his cousin and son-in-law, Ali bin Abi Talib, who initiated a new era of hereditary leadership which continued through successive generations, and in whose care was invested both spiritual knowledge and temporal authority, which Shi'a Muslims believe was enacted by the Prophet at the behest of Divine Command.

While the majority of Muslims, those who later became known as Sunnis, subscribed to different models of leadership, they also considered members of the Prophet's family and particularly his daughter Fatima, Ali and their two sons, Hasan and Husayn as "People of the House" (ahl al-bayt), a term which carries with it both respect and gravitas. In both the beliefs of Sunni and Shi'a Muslims as well as other Muslim groups, it is the Prophet's immediate family who were the most authentic sources of knowledge about the Qur'an and, after Muhammad, the most qualified teachers of Islam. They were also considered to be the most trusted carriers, protectors and interpreters of the Prophet's sunnah, those words and actions ascribed to him.

For Shi'a Muslims, this responsibility and carriage continued in the line of successors to the Prophet known as the Imams -- a term that has a different significance and history than simply the designation given to the prayer leader at the mosque. Literally meaning "one who is in front of," the term Imam in Shi'a discourses has come to designate a hereditary leader of the Muslim community, who has inherited the responsibility and role of guidance after the death of the Prophet. In Shi'a Islam, there can only be one supreme authority or Imam at a time. Each Imam, is succeeded one after another, enacted by a form of explicit designation, known as nass.

Throughout Shi'a history, there have been a number of succession disputes surrounding the question of the rightful inheritance of the position of the Imam. This has led to a number of different Imamat lineages, which ultimately resulted in the formation of several Shi'a communities. The largest, by far, are the Ithna Asharis, named after the 12 Imams who succeeded the Prophet. The 12th Imam is believed to have entered an occulted state (ghayba) in the 9th century, but is still present in the world. Other than the Zaydis, most Shi'a Muslims believe that the Imam is necessary for the world to function and many refer to the present Imam as Saheb-e Zaman or Imam al-Waqt -- the Imam of the Age. Shi'a Muslims continue to invoke prayers in his name.

The second largest community are those of the Ismailis, to which the Bohras belong. The Ismailis are also divided into multiple groups. The largest of which are the Nizari Ismalis, whose present and 49th Imam is Prince Karim Aga Khan, a position he inherited in 1957 from his grandfather, Sir Sultan Mahomed Shah, Aga Khan. The Musta'li Ismailis, to which the Bohras belong, also believe their current Imam has been hidden from the view of his adherents since the 12th century. It is their 21st Imam that was last "revealed" to them. Nonetheless, for the Bohras, the Imam is still physically present in this world, but though as behind a curtain (satr), rather than occulted.

Since the Musta'li Imam is not easily accessible to the Bohras, they have invoked a sub-hierarchy of spiritual leadership which they inherited from the rulership of the Fatimids, an important Shi'a dynasty based in Egypt in the 10th to 12th centuries. These rulers of Cairo and founders of its Al-Azhar University, were not only Caliphs, but also Shi'a Imams. Under the Imams, lay an intricate series of da'is, emissary-missionaries who propagated the religion and administered it in the various regions which the Shi'a Ismailis had present. Today, in the physical absence of the Imam, the Musta'li Ismailis have been led by a series of these da'is, the most important of which is the da'i al-mutlaq. It is the da'i al-mutlaq, a position now occupied by Syedna Mufaddal Saifuddin, who provides guidance to the community, but also many believe, has access to the Imam-in-Hiding, during his period of inaccessibility -- which for the Musta'lis has now lasted 53 successive generations of da'is. 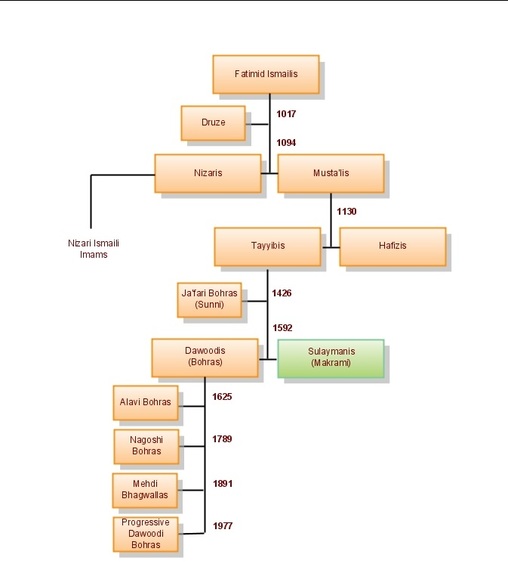 The Bohras are one branch of the Ismaili Muslims and the Dawoodis are one branch of the Bohras. The chart indicates the emergence of various Ismaili sub-groups, almost all of which have emerged from debates about legitimate succession. The numbers in brackets correspond to the dates in which these communities emerged.


Like the succession of Imams, the Bohra leader also designates his successor-da'i through the process of nass. In this case, the now-da'i was publicly announced by his predecessor and father on June 4, 2011, while in London. While the last several generations have seen the position of da'i inherited in the same family, this is not a requirement. In fact, the inheritance of the da'wa is based on a model by which the person most qualified in terms of knowledge and piety within the community inherits the role, as long as they also trace their lineage to the Prophet by way of the Shi'a Imams. The 51st da'i al-mutlaq, Taher Saifuddin, the grandfather of the present da'i, also publicly declared his successor when the latter was only 19, a position he only assumed three decades later. Like the lineage of Shi'a Imams, the Bohras have also seen a number of disputes around succession to the position of da'i, some of which took place very recently. In those communities, other leaders have inherited the supreme position.

For Bohra Muslims, the da'i al-mutlaq is the most intimate access that adherents can have to their Imam while he is in hiding, for within him is the Imam's grace, which helps to explain the kinds of attachment and fervor they feel towards him. While the institution of the da'wa continues in the present incumbent, the 102-year-old da'i who passed away in Mumbai during Friday's early hours will be mourned and remembered by the community as someone who brought them into the modern age and nurtured and cared for their well-begin for the last five decades. For anyone under the age of 50, this is the only da'i they had known and letting go of his physical self will be a difficult task in the days and months ahead.