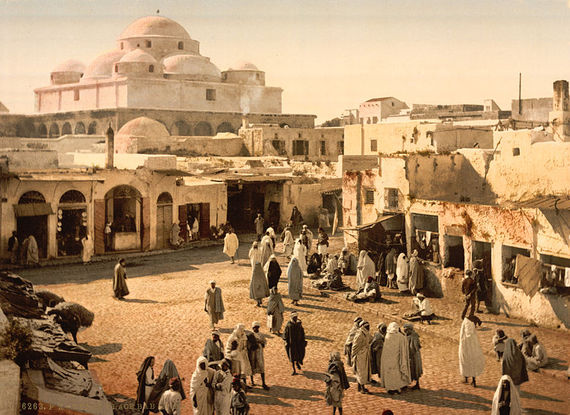 What's the correlation between one of the most iconic films of all time and the fastest-growing religion in the world?

The Star Wars film series revolves around the Jedi that learn the The Force from their teachers, Jedi Knights who have mastered the ways of The Force. They learn to detach themselves from worldly desires and discipline themselves to master self-control. They stand for justice and truth, warning against the evils of the Dark Side.

Interestingly enough, Islam also teaches the same principles and contains similar concepts. Ultimately, whether you're a Muslim attempting to perfect and strengthen your character and relationship with God or a 'padawan learner' attempting to master the force, the two seek not only to utilize their physical capacity to defend the defenseless, but also seek inner peace and tranquility.

Growing up as a Muslim and a fan of Star Wars, it never occurred to me that the two would somehow connect. Yet when I discovered some of the scenes from the original trilogy were filmed in Tunisia, where my family is from, I couldn't help but notice that perhaps George Lucas may have possibly been influenced by Arab culture as well as Islamic teachings to an extent.

As some may say, the Jedi masters resemble teachers of Sufi orders, a more mystic understanding of Islam. In any case, regardless of the school of thought one may follow, all Islamic students of knowledge learn from a teacher who has mastered the Islamic sciences and learned from their previous teachers and so on.

Throughout the journey of Islamic theological study one will find great wisdom hidden in scholarly work, centuries old dating as far back as the eighth century. Likewise, throughout the Star Wars film series one will encounter morals and lessons of great wisdom as the young padawan train with Jedi masters. With deep understanding comes a wise implementation of various morals, lessons, and teachings. Essentially, one will be able to navigate through life and its adversities and thus obtain a healthy spiritual uplifting.

Apart from the obvious, as previously mentioned, I also noticed some deeper connections as well. At its core, the film series goes beyond light sabers, battle ships, Jedi knights and Sith Lords. Essentially it is a tale of the forces of oppression and tyranny attempting to subjugate the forces of good under their control.

Luke Skywalker's home planet Tatooine, named after the Tunisian city 'Tataouine,' is a harsh environment much like the ancient city of Mecca. Luke would look out in to the wilderness and ponder over his purpose much like the Prophet Muhammad did in the 7th century. With many injustices consuming Meccan society, Prophet Muhammad grew frustrated and sought to bring about positive change.

The Muslims of the 7th century were severely persecuted in Mecca during the first thirteen years of divine revelation. Essentially, the Prophet was subjected to severe oppression and pressured by the chiefs of Quraysh, the ruling tribe of Mecca at the time. After the migration to Madinah, the Prophet had finally established a safe oasis for his followers to live without persecution and were eventually victorious against the aggressive policies of the Quraysh. As Luke Skywalker trained with Yoda in the swamp cave, he prepared for a rebellion against the empire and sought justice for the republic and brought peace and stability to the galaxy and beyond.

Despite the epic story line and galactic adventures, one of the most notable and introspective aspects of the film series that I also noticed is the dark path Anakin Skywalker embarked upon. Some may compare Anakin Skywalker and the dark side to the chiefs of Quraysh, yet I tend to see something different. I see the dark side and Anakin's negative path as a misguided understanding of the force, much like that of Abu Bakr Al Baghdadi and ISIS and their misunderstanding of Islam.

The force is in its true essence meant to be used for a good cause, to protect the galaxy, and to bring about guardians of peace. On the other hand, we see ISIS misusing and misunderstanding integral aspects of Islam such as the Caliphate, the Shariah, and Jihad. Their misunderstanding and uncontrollable zeal has essentially led them down a dark path as well.

The radicalization of Anakin is something that some Muslim youth unfortunately struggle with today. As master Yoda once said,

"Yes, a Jedi's strength flows from the Force. But beware of the dark side. Anger, fear, aggression; the dark side of the Force are they. Easily they flow, quick to join you in a fight. If once you start down the dark path, forever will it dominate your destiny, consume you it will, as it did Obi-Wan's apprentice"

Hence, it is our responsibility as Muslims to fully understand Islamic teachings and the positivity they bring, and as a community, to advise and guide those who seem to be lost, frustrated, and confused just as the Jedi did with the padawan.

Although many Muslims may feel disheartened by the afflictions facing the Muslim world, that is no justification to tread down a path of misguidance and indiscriminante violence. We must see the light that lies within Islamic principles and utilize them as a means of inspiration allowing us to emancipate ourselves as well as others from any and all injustices.

Although some may find it strange, to me the parallels between Islam and Star Wars are quite staggering. The spiritual connectivity to the human soul in the struggle to find inner peace and bring peace to societies, or galaxies in this case, is something I find relevant to the troubling times we live in today.

So as long as we seek to build a healthy understanding of spirituality and faith, we can work to utilize the correct understanding of Islam that we possess to prevent the dark side from over taking us. May Allah and the Force be with us all.