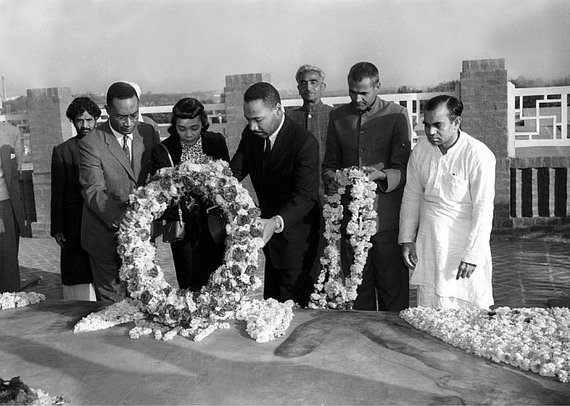 Following his 1959 trip to India, in which he visited the memorial of Mahatma Gandhi, the Rev. Martin Luther King, Jr., noted that he was "more convinced than ever that non-violent resistance is the most potent weapon available to oppressed people in their struggle for freedom."

The inspiration King drew from Gandhi and the Hindu concept of ahimsa is well-chronicled (including a piece last year in HuffPost by Gadadhara Pandit Dasa), but as we observe Martin Luther King, Jr. Day, it's important to examine a deeper connection between both men: the idea that seva is a force for uplift and bringing communities in from the margins. King, like Gandhi, drew inspiration from his faith to inspire others to serve selflessly.

Just as millions of us will be observing the holiday by doing service, it's important to understand why that concept -- which in Hindu philosophy is described as seva -- is, like non-violent resistance, such a potent weapon for uplift. When we serve others, we generally leave our own troubles behind, and instead are forward focused.

Moreover, seva recognizes our oneness with others, especially since there are so many labels that create arbitrary boundaries and divisions among us. When we come together in service and actually engage with one another, the realization of these external labels or what in Hinduism is termed as maya can fall away. The elation that we may feel when we are working together is the experiencing of our shared divinity.

As Ava DuVernay's phenomenal Selma shows, King's unflinching service and commitment to a cause far greater than his own life inspired millions during the Civil Rights Movement and left an indelible mark on the world long after his assassination. King felt a deep connection to Gandhi, particularly in Gandhi's disregard for his own life in the quest for the uplift of his fellow Indians. While King knew he could lose his life, he unceasingly looked forward, drawing others to the idea that one could lead by serving.

At a time of incredible turbulence and conflict, we often fail to appreciate how the spirit of service can overcome racial, religious, ethnic, and class boundaries that have been erected across the globe. When Gandhi served others, he never asked them their social status or their religion, and he never expected a personal outcome from such service. As Krishna tells Arjuna in the Bhagavad Gita (which Gandhi cited as his inspiration), one "should never engage in action for the sake of reward, nor should you long for inaction."

For both Gandhi and King, seva was its own reward, and the men lived and died by that principle. Today, so much of what we do is governed by what's in it for us. Even social action is often reduced to hashtags or liking something on social media, when truly selfless service requires us to get outside of our self-absorption.

One reason why so many people across the spectrum of occupations and demographics admire Gandhi and King is because they lived their lives in a way that continues to elude most.

As we honor King's legacy, and continue to be inspired by his life and that of Gandhi, we must remember that we can do more than just one day of service. Let's serve others selflessly every day we live, and be reminded that - with respect to our own mortality - goodwill and action on others behalf can't be put off for later.