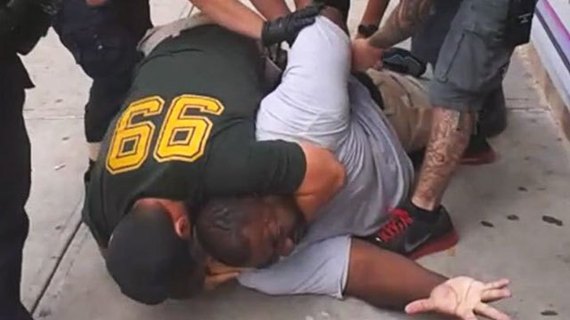 From my training in law school to my years as a prosecutor, I was taught that Lady Justice draped a blindfold across her eyes because she was a stalwart of equality, remaining impartial in all situations, and judging facts instead of people. I was encouraged to remember this, to practice this, to swallow it whole, and repeat it. As a concept, it was lofty and idealistic. It was noble. The idea that justice was literally blind.

Then came Wednesday's instant replay of injustice in Staten Island, after a grand jury -- the second in less than 10 days -- returned a "no true bill" against a white police officer who killed an unarmed black individual. But, unlike Ferguson, this time it was all on tape. And whether you wear a blue uniform or a black robe, make no mistake: this was vile, plain and simple.

The video showed it all. Eric Garner was a big man, yes, but he was an unarmed individual in broad daylight. He was being detained by NYPD officers, not for drugs, or weapons, or skipping parole or absconding, but rather, for selling cigarettes. That's right. Eric Garner was being arrested for selling cigarettes in the middle of the day to adults who didn't feel like spending the $14 or so it costs in New York for a pack of smokes. So Eric would sell it to them for a few bucks less. And so when two officers decided that this was a crime that they wanted to arrest him for, and as soon as they realized that their strategy of simply grabbing him didn't work, it was then that Officer Pantaleo grabbed Eric's throat from behind (in a maneuver that unilaterally violated the NYPD's internal policies) and, along with five other officers, brought him down to the ground and then piled on top of him. When Eric repeated several different times, "I can't breathe," the officers ignored him, handcuffed him, and then proceeded to watch him suffer cardiac arrest and die, all while he lay face down on the pavement, still cuffed. In fact, the same medical examiner whom the NYPD asks to testify in their murder cases concluded that the primary cause of death was homicide due to strangulation at the hands of the NYPD.

But that's not the vile part. The vile part is how this case and the Ferguson case were completely mismanaged for the purposes of (not) returning a grand jury indictment.

A grand jury is not responsible for finding guilt or innocence. More importantly, a prosecutor is not responsible for proving someone is guilty before a grand jury. The sole function of a grand jury is very limited and minimal. Is there enough evidence to at least justify an arrest in this case? A "yes" answer does not mean you think the person is guilty. A grand juror can believe a defendant is not guilty of a crime yet still return an indictment. Doing so only means that that there is enough evidence (probable cause) to let both sides have their day in court, to let them argue in front of a judge and jury, with lawyers representing each side, with the right to cross-examine witnesses and tell both sides of the story. In other words, an indictment simply lets justice run its due course.

Because in a grand jury, there is no judge. There is no defense attorney. Most of the time, you never hear from the defendant. There is no cross-examination of witnesses. There is only one side (the prosecution) presenting evidence as to why the defendant -- no matter who it is -- should be charged and why there should be a trial. It's the reason why most grand juries across America indict regularly, repeatedly, and routinely. It's just step one in a long road ahead that we call our criminal justice system.

And that's the rub here. Because both in the Ferguson case and in Staten Island, the prosecution turned the grand jury process on its head. In Ferguson, the prosecutor -- rather than presenting evidence as to why the police officer should be charged and why there should be a trial -- instead never asked the grand jury to charge the officer. This is unheard of. It is true that a prosecutor may have an obligation to present exculpatory evidence at a grand jury (California requires this, for instance), but it does not eviscerate the prosecution from performing its primary role: to prosecute and ask that charges be brought against the defendant. If you don't ask a grand jury to return charges, then you shouldn't have brought the case to the grand jury to begin with, especially when you only have one shot at going before them.

In many states, prosecutors need not inform the targets of grand juries of an investigation. This means most defendants don't even know a grand jury is hearing evidence against them. If a defendant does know and chooses to testify, prosecutors will often question the defendants mercilessly in an effort to show inconsistencies in their stories. Ultimately, the prosecutor will highlight to the grand jury all the evidence that justifies returning an indictment against the defendant and minimize the effect any exculpatory evidence may have.

Yet both in Ferguson and Staten Island, where the defendants were police officers, the prosecutors did the opposite. In both cases, the defendants knew of the grand juries and were invited to testify. In both grand juries, the prosecutors either asked softball questions of the defendants or excused them after only two hours, ignoring important follow-up questions that any prosecutor would at least ask. In both cases, the prosecutor threw the kitchen sink at the grand jurors, presenting and highlighting exculpatory evidence and inundating jurors as though it were a trial. In reading the Ferguson transcript of the grand jury proceedings, it is hard-pressed to deny that the police officer defendant received a benefit that no other defendant seems to get in a grand jury: the benefit of the prosecutor becoming his defense attorney. (Whether the same holds true in the Staten Island proceeding remains to be seen, but in light of the videotaped evidence, it is hard to believe otherwise.)

To be clear, I am not opining that both defendants were necessarily guilty of what they were "charged" with. Perhaps the grand juries in both cases reached the same conclusion that a trial jury would have reached anyway (although in the Staten Island case, I doubt it). But the truth is that no one can ever say for certain because, in light of the grand jury findings, we will never hear both sides of the story in the way we needed to, wherein a trial judge would have ruled on admissible evidence, where two adversarial lawyers would have had a chance to discuss the case, where both sides would have had the right to put on evidence, and where cross-examination would have elicited much more information than a unilaterally-run secret grand jury proceeding.

While much of the protests revolving around Ferguson and Staten Island now revolve around race, there is an even more troubling dynamic and that is the perversion of the legal system in both instances to trust itself. For instance, consider the three police officers who were acquitted in 1992 of beating Rodney King, or the 1995 acquittal of OJ Simpson, or the not-guilty verdicts of the police officers who beat and killed Kelly Thomas earlier this year. The common thread in each case was not necessarily race (Kelly Thomas was white). Rather, each high-profile case involved police misconduct and -- although the defendant in each case was found not guilty at trial -- a grand jury or a judge still found probable cause to at least necessitate a trial and allow both sides to have their day in court. In other words, the system trusted itself to work, for better or worse.

An indictment is not synonymous with guilt. And in both Ferguson and Staten Island, the prosecutor and grand jury usurped their authority by transforming the grand jury hearing into a closed-door private trial devoid of a judge, opposing counsel, and the 4th, 5th, and 6th Amendments. It's not that they answered incorrectly in the end; it's that they were asking the wrong questions to begin with.

And it's not that Lady Justice drapes a cloth around her eyes to remain impartial; it's that she blindfolds herself when there are some things so vile that even she cannot bear to see.