Does Australia have its very own ferryman of the dead?

In Greek mythology, Charon carried souls of the deceased across the river Styx and into the underworld. This week, news has emerged that a mysterious man dressed as an undertaker has been spotted riding a coffin on the misty waters of Canberra’s Lake Burley Griffin.

Naturally, residents have been spooked by the sight.

“In the distance … we noticed a figure emerge from the thick fog," Jeanne Mclauchlan, who saw the man on the lake last weekend, told the Canberra Times. “It was a figure of a man dressed in a tuxedo and top hat on a stand-up-paddle (SUP) coffin, complete with flowers, paddling toward us.”

“We asked 'coffin man,' 'Where are you going'? His response was, 'To Queanbeyan cemetery as I have a 3 p.m. grave site to prepare,’” Mclauchlan continued.

This was apparently not the first time that the figure has been observed on Lake Burley Griffin, which is known to get spookily foggy at times. In June, another visitor to the lake captured the coffin-riding man on camera.

http://t.co/2KiqJIvnUR this photo was taken by my oncologist! he is a hero.

According to Mashable, there are rumors swirling that the mystery man is one Tom Simmat, a human and kayaker from Sydney. Simmat has reportedly been seen riding on a coffin-SUP.

However, when Mashable attempted to contact Simmat, the news outlet says they received a creepy e-mail from someone identifying himself as “The Lost Undertaker.”

Unlike Superman, Robin Hood, Zorro, Spiderman, Batman and Wonderwoman, who all revealed their identity to the detriment of their purpose; The Lost Undertaker wishes to hide his true identity. His purpose is to give hope to the oppressed and put the fear of God into the oppressors, villains and rogues that surround us all. 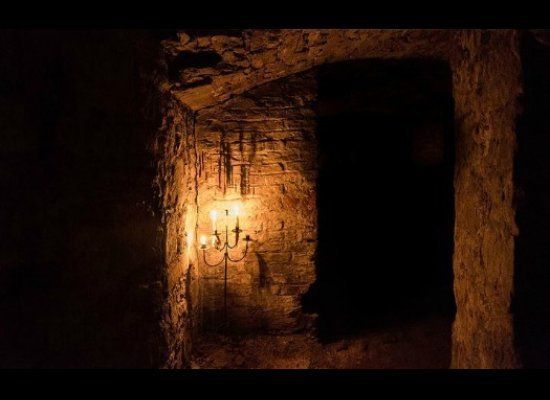 1 / 10
Edinburgh, Scotland
<a href="http://www.cheapflights.com" target="_hplink">Cheapflights.com </a> begins its frightful city tours in Scotland. Edinburgh is said to be the most haunted city in Scotland, and, with many underground tunnels and streets, it’s no surprise why. In Old Town, Mary King’s Close, a street now enclosed underground, is said to be where victims of the plague in the mid-1600s were quarantined and left to die. Explore the ins and outs of Edinburgh’s underground history with a City of the Dead tour, where you’ll be taken to the South Bridge Vaults. Built to house pubs and shops, the Vaults were soon abandoned due to poor conditions, but remain a site of active ghost sightings and paranormal activity still today. Image: Old underground vaults in Edinburgh, Scotland (<a href="https://www.flickr.com/photos/fw42/15111447460" target="_hplink">fw42</a>)