When it comes to the future of travel, many experts have looked beyond Earth to the cosmos, naming space tourism as the next big trend.

But it turns out there's another trend that's quietly making waves on our home planet, targeting destinations beneath the sea instead of above the sky: underwater hotels.

The trend has been dubbed "inner space tourism" by Tony Webb, managing director of the new Planet Ocean Underwater Hotel, which is in development after receiving a U.S. patent for its innovative design last year.

Webb even describes the 12-room luxury submarine hotel, which will float about 30 feet beneath the ocean surface, as being "like the International Space Station."

Just like the ISS, the property presents an exciting opportunity to do some science.

One point of this is to try to link the tourism to improving the environment." Marint biologist Dr. Thomas Goreau

Planet Ocean aims to donate 10 percent of its proceeds to coral reef restoration -- and wherever the movable hotel is located, marine biologist Dr. Thomas Goreau will grow a natural coral reef habitat in that same area. The plan includes relocations to various sites around the world.

"One point of this is to try to link the tourism to improving the environment," Goreau, president of the Global Coral Reef Alliance, told The Huffington Post. "We help people restore reefs and having hotels do something and be part of the solution would be great. So far, they've been part of the problem."

Indeed, about 58 percent of the world's reefs are threatened by human activity, such as the coastal development of buildings or yachts causing reef damage, according to the United Nations Environment Program.

Restoring reefs is possible, however. Goreau and his colleagues at the alliance invented the so-called biorock method, in which low-voltage electrical currents are used to stimulate the growth of reefs on limestone surfaces.

"We can grow reef frameworks all around an underwater hotel, and put them down on flat sand," Goreau said. "We can grow reefs of any size and shape around those and that material is limestone. It's the only marine construction material that gains strength with age."

Planet Ocean itself will only be positioned above sand, so as to reduce any potential negative impacts on the environment, Eleanor Mitch, CEO of the hotel, told The Huffington Post. She added that non-corrosive and non-pollutant marine equipment will be used to build the hotel.

Marine biologists will help the hotel to select the best sites to settle in, Mitch said. The underwater property also will make an effort to avoid hurricanes and any other weather-related risks.

"We believe that the future of travel and tourism will be tailor-made experiences," she said. "We also firmly believe in responsible travel and tourism, which means that local economies and the environment benefit from these activities. It has to be a win-win scenario." 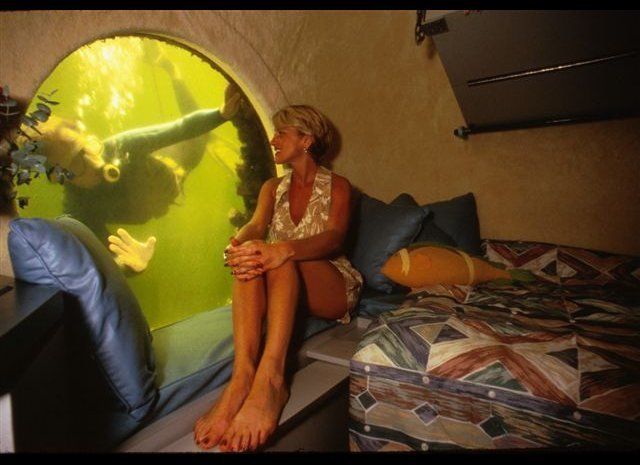 1 / 10
Jules' Lodge Interior
Jules' Lodge sits at a depth of about 22 feet in the tropical mangrove habitat of Emerald Lagoon at Key Largo Undersea Park in Key Largo, Florida. Guests come and go as they please through the open hatch in the floor, just like the aquanauts in Sealab (scuba certification is available on site if needed). With two separate bedrooms and a common area (equipped with a kitchenette, entertainment center, and of course a 42-inch view port), the Lodge typically houses one or two couples at a time, but can sleep up to six people. Gourmet meals - including pizza from a venerable local parlor - are delivered. Prices range from a $125-per-person day rate up to $1,395 for the "ultimate romantic getaway package."