In the world of clean energy, kites have have become a big deal. Recent advances in technology have lifted ideas like high-altitude wind turbine kites, parakite farms and ship-towing kites off the ground and made them a viable, wind-powered option as clean energy sources. Kites can harness more than just the wind, though.

It was just last year that we covered a story about kites flying under the sea to harness tidal energy. Now, Minesto, the company behind that under-sea kite project called "Deep Green," has announced they've received over $560,000 from The Carbon Trust to dive forward with deploying a prototype of their technology. If their trial is successful, it could lead to a large-scale implementation of underwater kites around the UK coastline that the company says would generate enough juice (530 GWh) to power all of the homes in a city the size of Newcastle (population 189,863) by 2020. 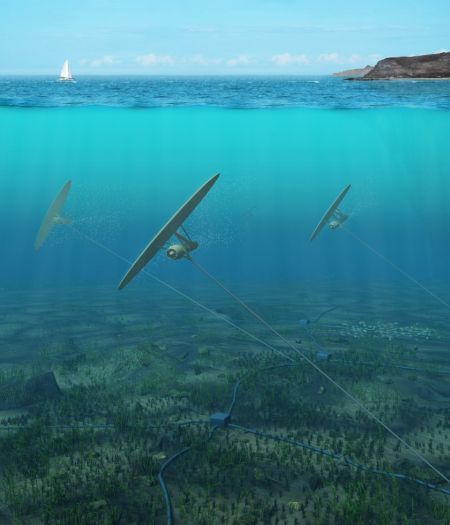 These under-sea kites harness the power of oceanic forces in much the same way that land-based kites capture wind energy. As this article from SmartPlanet illustrates, a rudder-controlled kite "flies" through the deep ocean in a figure eight pattern, capturing and magnifying wave energy as water passes through, then channels it through a turbine which sends the power to a generator located below on the sea floor. Because the motion of the kite against the current can intensify the power of the ocean current by a magnitude of 10, this device can work effectively, even in less-than-vigorous waters. That enhances its potential globally and makes it a serious contender in the race for sustainable, renewable energy.

The renewed support Minesto received from The Carbon Trust is an indication of the support that awaits the right energy project. As part of the funding announcement, Benj Sykes, Director of Innovations at the Carbon Trust, said: "Minesto's Deep Green is a very exciting technology as it could provide a step change reduction in the cost of tidal energy and open up swathes of the UK's coast to generating electricity. Tidal energy has the potential to produce up to 18 terawatt hours of electricity, equivalent to over 5% of the UK's electricity consumption."