Researchers knew there were ruins of some sort in shallow waters off the Greek island of Delos, assuming the structures were simply remnants of a port that had been submerged.

But a recent examination of the ocean bottom showed it wasn't a port down there but the ruins of an ancient settlement dating back to the first century B.C., complete with its own pottery workshop and other buildings. 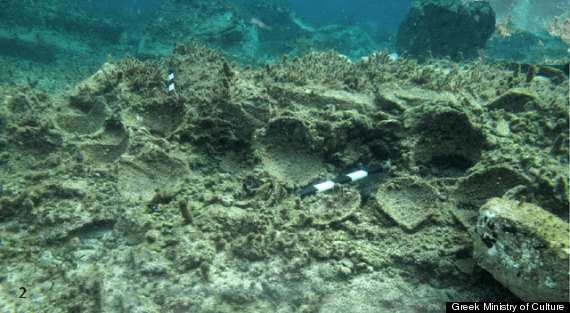 A collection of 16 clay pots found in shallow water off the Greek island of Delos.

Divers from the National Hellenic Research Foundation and the Greek Ministry of Culture discovered large stones, columns, clay pots, and the remnants of a kiln at a depth of just six feet, according to English language media outlet the Greek Reporter.

“Similar workshops have been found in Pompeii and Herculaneum,” the ministry said in a written statement, as reported by Discovery News.

The researchers expect the discovery to shed new light on the history of Delos, which is an important site for Greek mythology. According to Greek myth, the sun god Apollo and his sister Artemis were born on Delos.

Delos was also a thriving cultural center from the 8th to the first century B.C., and it served as a bustling cosmopolitan port between the 2nd and 1st centuries B.C., according to UNESCO. The island was abandoned in the 6th century A.D.

Today, Delos consists only of ruins and is maintained as a UNESCO World Heritage Site.