Ronald Davis is a respected professor of biochemistry and genetics at Stanford University, and director of its Genome Technology Center. So why is a picture of him wearing his underwear over his pants superhero-style circulating on social media?

Davis is not alone. Others are joining in making themselves look ridiculous every day. 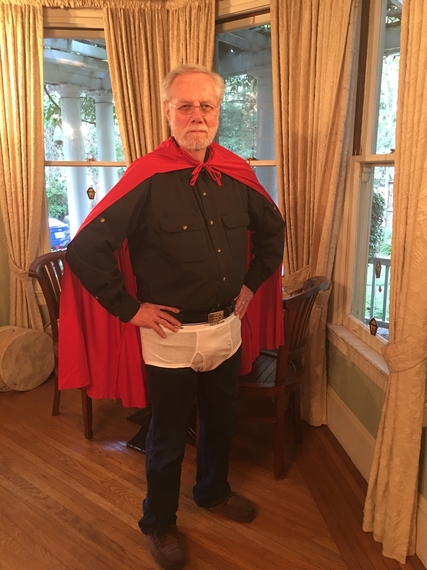 Looking silly for a serious cause

The answer is that Davis is a research scientist whose son is severely afflicted with Myalgic Encephalomyelitis (ME), better known as Chronic Fatigue Syndrome -- a name that dismisses the severity of this little understood and understudied disease that has devastated the lives of perhaps 1 million Americans, and what are calculated to be 17 million people worldwide.

Taking a selfie with underwear worn over outerwear is a new campaign, "Undies on the Outside," to raise money -- desperately needed money -- for research on ME. This money possibly should have come through the government years ago, but the principal medical research arm of the United States, the National Institutes of Health, has been parsimonious in funding ME down through the years. Only $5 million a year is devoted to the affliction.

Yet the sick are almost inevitably sentenced to a lifetime of unspeakable suffering -- often being confined to bed for months at a time and sometimes years -- in pain and hideous isolation. They tell their story on ME/CFSAlert, the YouTube channel that I co-founded.

ME is an equal-opportunity monster: It strikes all ages and both sexes. Dr. Jose Montoya of the Stanford University Medical Center describes it as ordering a "parallel life."

One of my close friends, who has suffered from the disease for 25 years, is fairly typical in her adversity. She was an athletic woman with a passion for squash and cycling. She said that when she was afflicted she became "like a car that had run out of gas." That was on good days.

My friend's life went from one of accomplishment and fullness in all the ways that a life can go right to one of surviving on the margins. For two years, she was bedridden. Every type of exertion is followed by a kind of unreasonable punishment for just trying to be normal. Recently, we spent a few hours together and had lunch in a restaurant. The price she paid was being so sick for two days that she had to stay in bed.

Normal family life, work and simple enjoyments are prescribed by ME. I have been writing and broadcasting about it for five years, during which I have come to think of those who suffer day in and day out, essentially without hope, as the children of a lesser god, alive but denied the joys of being alive. Suicide rates are high, and my e-mail box is full of e-mails from people who say they wish they could die.

Symptoms vary from a patient who told me her limbs seemed to be exploding to many who suffer mental fog, known as dysphasia, and need hours to write a few simple sentences.

The "Undies on the Outside" challenge was devised by an Australian woman. It came from a party game of residents at cheetah rescue center in South Africa, who relieved the tedium of an evening by dressing up with their underwear over their outerwear. Years later one of those revelers, Kate Booker, now living in London, suffering from ME for 18 years, and bitterly aware of the paucity of funding globally for the disease, was inspired to work up a challenge to raise money.

Everyone photographed wearing their undies over their clothes is sending $10 to the Open Medicine Foundation in the Los Angeles area, and challenging three other people to do likewise. Booker chose the foundation because it is raising money for pure research into ME and is concentrating initially on finding a biomarker, so that people can be diagnosed and not thrown into medical limbo.

The Open Medicine Foundation is run by Linda Tannenbaum, whose adult daughter has been afflicted since she was a teenager.

It is especially sad that this disease seems only to be known and understood by those who have a family member or close friend who has been, as it were, taken from them while still being there, shuttered away in plain sight. -- For InsideSources