Gaze upon Jean-Michel Basquiat's "Undiscovered Genius Of The Mississippi Delta," and your eyes are forced to dart from one ambiguous scribble to the next. The seemingly random bits of symbolism -- a quasi-anatomical sketch here, the crude face of a cow there -- appear smudged and chaotic before your eyes. Like a graffiti-infused response to Picasso's "Guernica" or a Deep Southern take on "The Garden of Earthly Delights," the masterpiece forces you to digest 15-feet worth of text and color, piecing together the five canvases worth of select African American history. 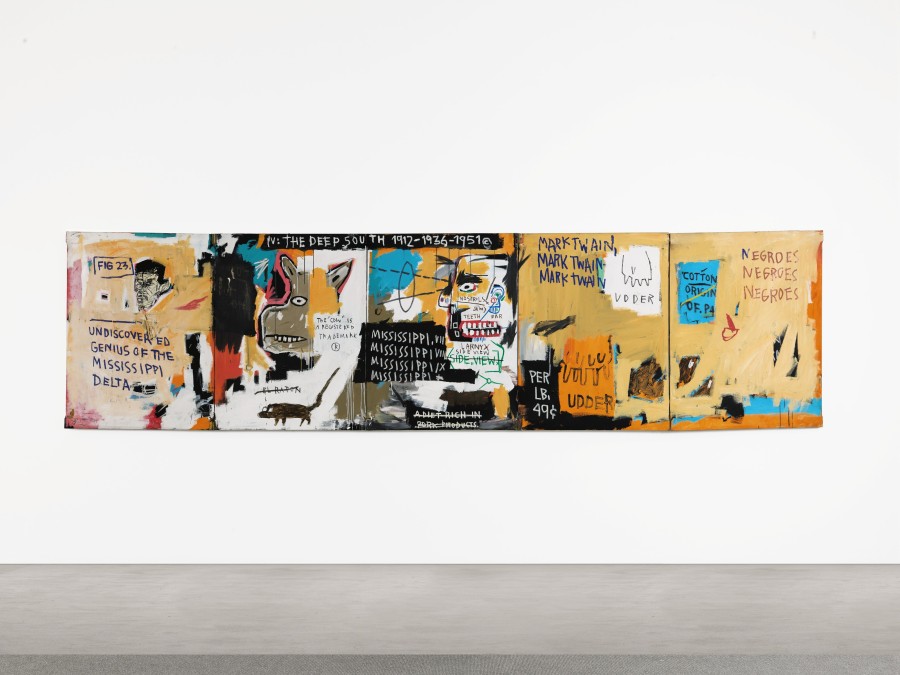 The painting's title and the banner, "The Deep South 1912-1936-1951," hint at the meaning of the tangled imagery. The visuals trek through moments of southern past, from Mark Twain to cotton farming to slavery auctions. Repetition of words mimics the beating of a drum, while the presence of animals like rats and cows harken back to the inhumanity rampant more than a century ago. Basquiat himself makes an cameo in the mashup of his country's cultural roots, appearing as "fig. 23" -- just another symbol in his personal and historical collage.

“'Undiscovered Genius of the Mississippi Delta' is a stunning combination of subject-matter, format, and technique," Grégoire Billault, a Senior Vice President in Sotheby's Contemporary Art Department, explained to HuffPost. "By coupling the symbols and phrases most closely associated with the African American story with the abstract expressionist painterly technique in the multi-panel format, Jean-Michel Basquiat created an exceptional masterpiece of history painting.” 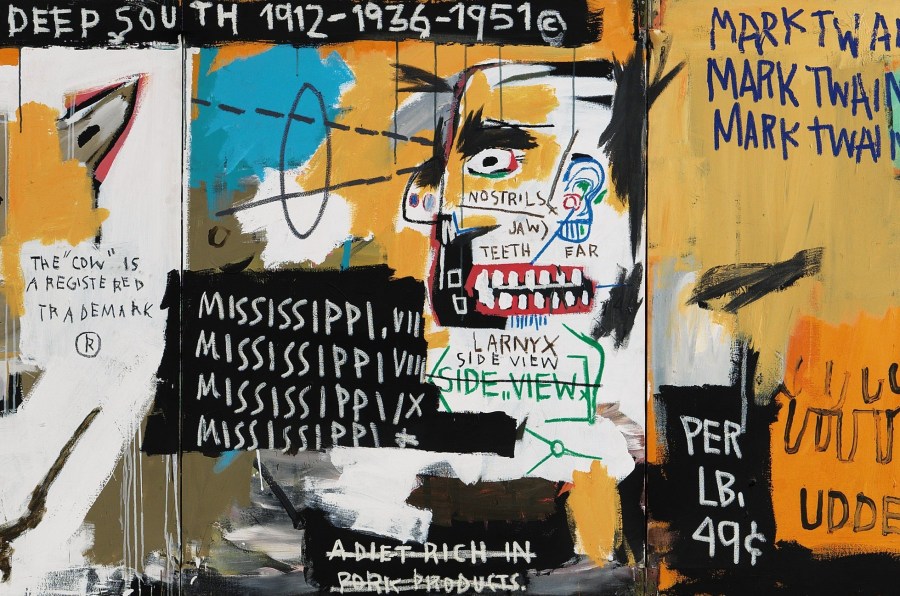 The 1983 mural is heading to Sotheby's next month, estimated to fetch around $20 million when it hits the auction block on May 14 during the Contemporary Art Evening sale. It will accompany seven other works spanning the late artist's short-lived career, billed as a collection of SAMO's "most political work."

From a smattering of early portraits to his five-piece mural, the paintings manage to showcase both Basquait's penchant for repeated symbols and the frenzied breadth of style encapsulated in his canvases. Sloppily aligned text dances next to primitive scrawls, while emotive self-renderings mix with the dark humor of a urinating dog. Jumping from readymades to collage to figurative pieces, the works brought the rough and tumble of graffiti to the walls of galleries. Disparate and overtly rebellious, it was just what the eighties art world craved.

"Basquiat's art gave him the image of a wild street kid skulking around at night painting graffiti," William Wilson of The LA Times wrote in 1988, shortly after the artist's death. "He started out wanting to be a cartoonist and wound up wanting to be a Star."

Scroll through a preview of the seven Basquiat works below and let us know your thoughts on the selection in the comments.