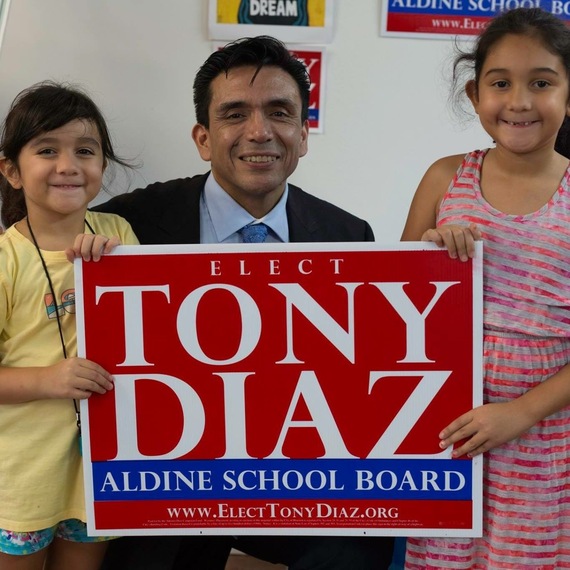 Running is right. Yes, it's a tired metaphor, but most candidates are exhausted-if they are campaigning right.

The answer is that I'm always in the middle of a border.

It seems as if my living room is in Houston and my kitchen is in Aldine.

Other folks, ask me why I'm not running for Houston City Council.

Although, I have been a community organizer, a professor, and a writer for many years, and although the basic work of those campaigns is very similar to a political campaign-campaign is the right word.

This is like a battle in the trenches, slow, hand to hand combat. House to house inciting. Yard signs are the twitter of school board campaigns and face to face is the Facebook.

I wanted to first get a taste of what this terrain looks and feels like.

I mean, I have been to City Hall before, and I've been to the Texas State Board of Education before, but when I went it was to receive an award or to protest.

Attending a city council or school board meeting and reading the agenda like a want ad is a different story.

The day I dropped in on the proceedings of the Aldine School Board, the 7 members were voting to raise the starting salary for teachers in their district so that they could compete with other districts for talent.

They went on to approve raising the starting pay for Aldine ISD teachers to $51,000 a year, with an additional bonus for teachers with a certificate in Bilingual Education.

Furthermore, for folks who thought the post is small, Aldine ISD just admitted its 70,000th student. 70% of the student body is Latino, and Aldine is now the 10th largest school district in Texas. I haven't checked in the last hour, maybe now it's the 9th largest.

On top of that, Aldine's budget is now over $600 million. Also, up for election is the approval of a $798 million dollar bond. That means the next school board may decide how up to $1.4 billion are allocated.

I guess everything is bigger in Texas. 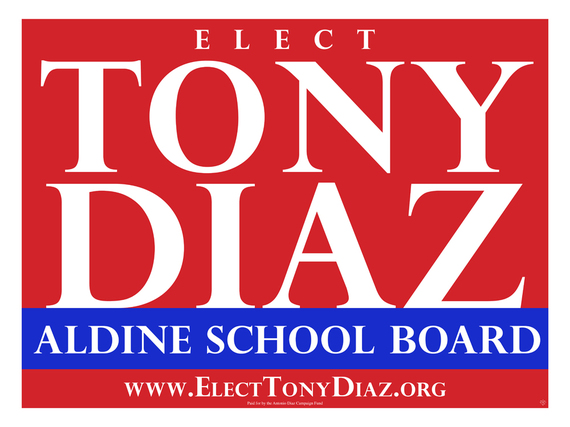 The Latino Demographic will come of age in Texas, when it can find its precinct.

I have to give Arizona credit, at least they are direct in their oppression, be it the anti-immigrant movement they started, or the anti-intellectual attack on Ethnic Studies that they launched.

Texas is why more sophisticated.

Of course, you can vote in Texas. Just go to your precinct.

Sure, you are registered to vote in Harris County, so just check here.

However, you might live in Aldine like me, but those precincts don't align perfectly with County precincts. So when you look at a list of Harris County Precincts listing top voting areas, it lists 083 first. However, only a sliver of 083 is actually in Aldine.

You know it's important, but it's so convoluted that some days you just wanna give up. And once folks figure out the rules, they forget how long it took them to learn them, and they look down on folks still learning.

So why run for office?

Folks ask me that time and time again. And some of my friends tried to talk me out of it. Which means that a lot of the people I know who would be great elected officials won't run. So then who will?

I'm running for Aldine School Board because I'm a professor, and I know what our students need in the class room, and I would love to convene with other professors and teachers to shape policies that will help us inspire and educate students.

I'm running for Aldine School Board because I'm an activist, and I will stand up when the system is wrong, but life would be better if we can inspire the system to stay on course. Besides, there are 2,100 school districts in Texas. Ya can't picket all of them.

I'm running for Aldine School Board because I'm a writer. I love to read, I love to write. I know how much joy there is in expressing yourself and in empowering others to share their story. We must not accept a system that takes the joy out of learning and teaching.

There are no polls conducted for school board races.

I'm up against an incumbent that already has a base of voters in a stretch of Texas known for low turn outs.

But I am a community organizer, and I have to thank my family, friends, and allies who have teamed up with me one more time for this new adventure. We convened 17 years ago to begin Nuestra Palabra: Latino Writers Having Their Say when folks said our community was not interested in books or literature, and we proved them wrong.

We teamed up when Arizona banned Ethnic Studies, and we became Librotraficantes, and we smuggled the books they banned back into Arizona, and we joined a national movement to keep that law in check.

I'm flattered and honored that the brilliant think tank I call family, friends, and colleagues convene with me one more time for this next phase in our adventures deep in the heart of Texas.

Thus, I write this before I become too dejected from losing, or too cocky from winning. Right now, I'm centered, enjoying running, my heart racing, my feet moving across this large expanse of Aldine, under that big beautiful Texas sky, meeting my neighbors, and giving everybody a run for their money. 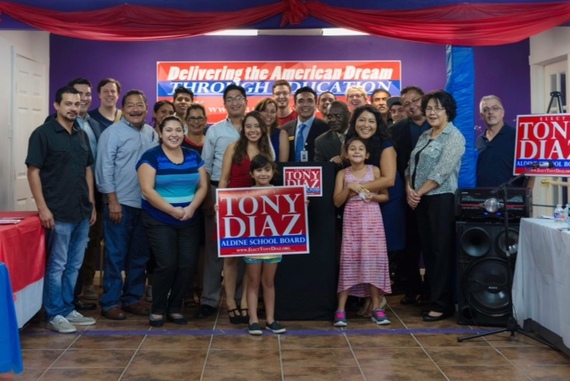