Since 2009, a layoff victim has been more likely to give up looking for work and drop out of the labor force than to find a job, according to a new report from the Roosevelt Institute, meaning employment prospects for the jobless are the worst they have been since the government started keeping track of them.

From data going back to 1967, "We can see that it has never been more likely than it is now for the unemployed to leave the labor force over finding a job in the labor market," write the Roosevelt Institute's Arjun Jayadev and Michael Konczal.

Since the recession began in December 2007, 4.7 million people have dropped out of the labor force, which means they lost hope of finding work and so quit looking. Even more people would have given up on their job searches had it not been for a dramatic increase in unemployment benefits, which encourage the jobless to keep searching, according to the report's authors.

If policymakers fail to address long-term joblessness and the large number of people dropping out of the labor force, the report says, the unemployment problem could become permanent. "Officials need to act in a bold and imaginative manner to repair the labor market's dysfunction -- much as Roosevelt did -- or risk entrenching the social misery that engulfs many Americans today," Jayadev and Konczal write.

Here's a graph from the Roosevelt Institute that compares the flow of workers between employment, unemployment and separation from the labor force: 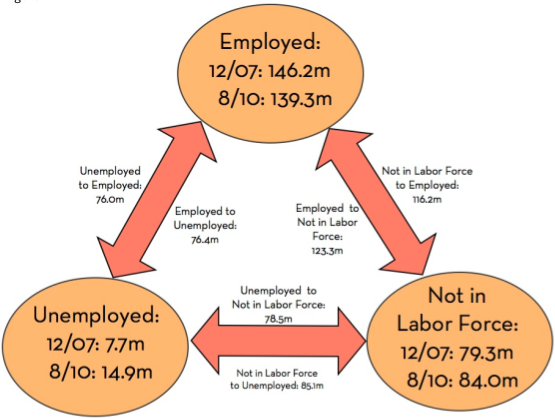