Fashion always finds a way to offend... even in France.

Women's Wear Daily reports that the latest shirt to ruffle feathers is a sweatshirt by French brand Le Léon, which just launched this week. To kick things off, they posted a set of cutesy sweatshirts with slogans on their website with phrases like "Purée Jambon," "Grande Gueule," "Salopette," "Cocotte Minute"... and "Chômeur."

Chômeur, for those whose French is très rusty, means "unemployed," or more specifically "unemployed person." This, emblazoned on a cashmere sweater priced at 285 euros (around $378), did not sit well with many on Twitter. "C'est une Incitation au poing dans la gueule envoyé par un vrai #chômeur," tweeted one, meaning, "It's incitement to get a punch in the mouth from an actual unemployed person."

Take into account that France's unemployment rate has been rapidly climbing recently, reaching its highest level this summer since 1998, and you can see how many might see a cheeky unemployment sweatshirt to be in bad taste.

The sweatshirt no longer appears online at LeLeon.fr, but you can see it via Twitter. Do you think the sweatshirt is offensive or no big deal? 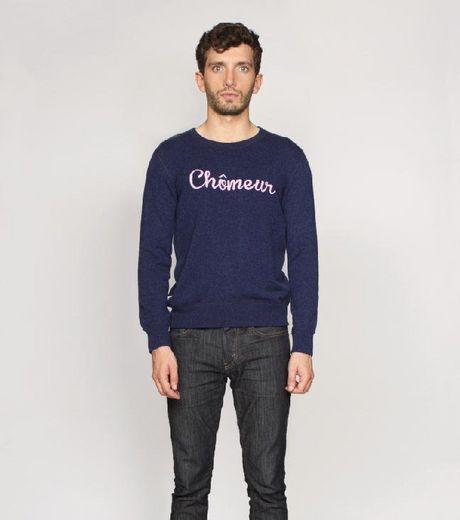 Products that raises some eyebrows:

Voting Made Easy
Register to vote and apply for an absentee ballot today
Register now
More:
Stylesweatshirt
Newsletter Sign Up
An essential daily guide to achieving the good life
Subscribe to our lifestyle email.
Successfully Subscribed!
Realness delivered to your inbox