The Bureau of Labor Statistics reported that the U.S. economy added 214,000 jobs in October and that unemployment fell a tenth of a percentage point to 5.8 percent. This is the ninth straight month in which employers added 200,000 jobs or more, the Financial Times' Eric Platt pointed out. The last such streak of that length happened in 1993-1995 and lasted 19 months.

Unemployment has been ticking down with remarkable consistency, thanks to this incredibly durable job growth, along with a steady decline in the percentage of Americans in the labor force -- when people drop out of the labor force because of retirement or discouragement, they're no longer counted as "unemployed."

That's not really happening this time. Here's the unemployment rate and the yearly change in average hourly wages, charted: 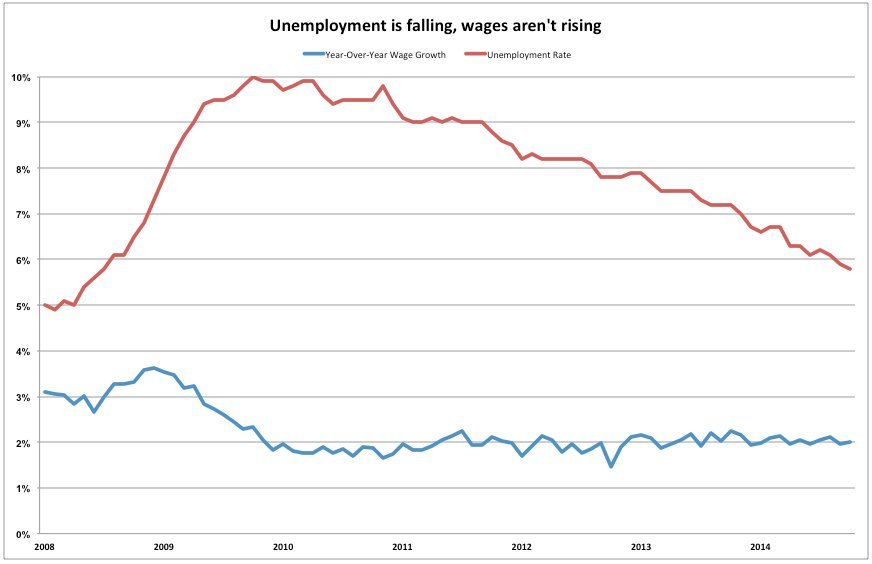 Pay rose a paltry 0.1 percent in October and is up 2 percent in the past year. That's just 0.3 percentage points above inflation, which is currently rising at an annual rate of 1.7 percent.

There are lots of potential explanations for why unemployment keeps dropping without driving wages higher. The number of Americans sitting on the sidelines of the job market is still relatively high, for one thing.

The negatives of lousy wage growth are obvious. There are positives, too, though they're a lot less obvious: With wage growth stagnant, there is no indication that inflation is going to rise anytime soon. That means there's no pressure – aside from ideology – for the Federal Reserve to raise interest rates to slow down the economy.

The zaniest theories of coming hyperinflation being espoused by the hyper-rich continue to be rebutted by reality. Such debating points are little consolation, however, for stagnant paychecks.