After a winter of weak improvement in the labor market, the Bureau of Labor Statistics has finally reported a promising sign of growth in the American economy.

In February, 192,000 jobs were added to the U.S. economy. While this headline number is encouraging, February's job growth was not, economists point out, good enough to make a significant dent in the unemployment rate, which remained relatively unchanged, falling to 8.9 percent from 9 percent.

"I'm hoping that this is the beginning of something better," said Georgetown professor of public policy Harry Holzer. "All of last year we averaged at 100,000 a month, and that's not enough. that's not enough to even keep up with population growth. The question now is are we returning to something more sustained -- job growth at the level that could really start to improve things."

Job gains occurred in manufacturing, construction, professional and business services, health care, and transportation and warehousing, while employment in state and local government edged down. One bright spot in the bureau's report was that the areas of job growth are slightly more wide spread than in recent months. In the past year, job growth has focussed primarily in low wage industries.

The last several months of job growth have been achingly slow. Despite numerous indicators of economic recovery -- manufacturing expanding for the nineteenth straight month, gross domestic product on the rise, and growing corporate profits -- the unemployment rate didn't drop below a grim 9 percent.

In fact, this winter's most significant drop in the unemployment rate came, not from jobs added to a difficult labor market, but from discouraged workers giving up the hunt.

(Click here for our full report on workers leaving the labor force.)

Last month, even as the unemployment rate dropped from 9.4 to 9 percent, only 36,000 new jobs were added. Some of this was due to miserable January weather, and economists caution that its important to look at the average over several months, particularly when weather is a factor.

"I never put too much emphasis on any one month," Holzer said. "But overall the trend looks to me like modest improvement. If you can stay at close to 200,000 jobs a month, or even improve that number, then you'd start to see more sustained progress in the unemployment rate."

Still, economists say that it would take on average at least 250,000 added month over month, year after year, to bring the unemployment rate down to re-recession levels.

"There's no question that we're adding jobs," Holzer said. "The question is how long this will be sustained, and will it be enough to bring the unemployment rate down, and how quickly."

To get a sense of the scope of the hole the American economy is in, take a look at the below chart from the Federal Reserve of Minneapolis, which compares how bad the Great Recession was and how the recovery compares to previous cycles. 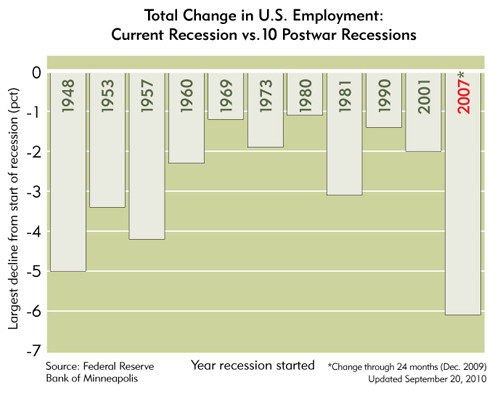