Friday's lower than predicted payroll creation of 173,000 jobs doesn't change my prediction of higher jobs growth ahead. The prediction was for 250,000 payroll jobs added in August, but downward seasonal adjustments reduced payrolls by -799,000. In other words net -799,000 jobs were stricken from the unadjusted numbers (-941,000 + 142,000 added to B-1 payroll report), because it's the end of summer and lots of summer jobs normally disappear with the back-to-schoolers this month (but -800,000...?).

Confirming this are past months' revisions. The pace of hiring in July and June was stronger than initially reported, according to a survey of business establishments (i.e., the payroll survey). The Labor Department said 245,000 new jobs were created in July instead of 215,000. June's gain was revised up to 245,000 from 231,000 for a total of 44,000 jobs added back from the seasonal adjustment figure. 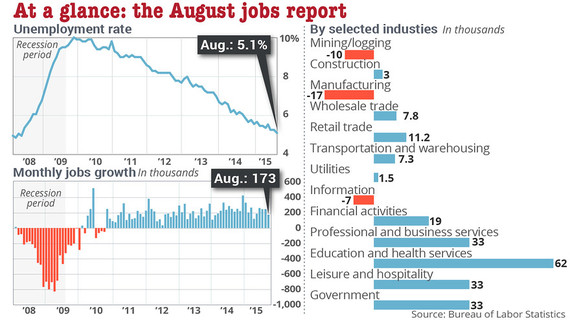 The good news was that governments mostly at the local level added 33,000 payroll jobs, and wages are rising. The nation's unemployment rate fell to 5.1 percent from 5.3 percent, marking the lowest level since April 2008 just as the Great Recession was beginning.

The unemployment rate fell because it is determined by a separate survey of households that showed a sharp 237,000 drop in the number of people who said they were unemployment, while only a small number dropped out of the labor force.

The improvement in the labor market also appears to be forcing more companies to increase pay to attract or maintain workers. The average hourly wage paid to American workers rose 8 cents, or 0.3 percent, in August to $25.09 an hour. From August 2014 to August 2015 hourly wages rose 2.2 percent, matching the best gain of the past four years.

So we know there will be upward revisions in future reports. That's why consumers are spending more.