It's certainly not news that American women continue to earn less than men for the same work, typically 79 cents on the dollar. But what's less understood is the devastating impact those lost wages have over time. In fact, over a working woman's career, that pay gap could accumulate to a half million dollars in lost income and even more for women of color. A comprehensive analysis of gender pay inequality, released by the Joint Economic Committee's Democratic staff, shows how the gender pay gap grows over time. It's not just an issue for working women because this inequality can also have a compounding and devastating impact on retired women.

The thought of running out of money in retirement keeps 57% of women awake at night. That's not a surprise when you consider the many combined factors which make retirement especially challenging for American women. Women earn less than men even when doing the same jobs, they more often work part-time or in jobs that do not offer retirement savings plans, and they tend to spend more time out of the workforce as a consequence of their caregiving responsibilities. Women could lose $430,480 in earnings over the course of a 40-year career due to the wage gap alone. For Latinas the career losses mount to $1,007,080, and for African American women the losses are $877,480. Lower career earnings also translate to fewer savings for many women in retirement. At the same time, their longer lifespan and higher chances of disability means that they will have higher retirement costs, both for everyday expenses and necessary medical care.

These financial obstacles facing older women explain why women are 80% more likely than men to be impoverished at age 65 and over. The median income of women age 65 and older is 44% lower than the median income of men of the same age and that poverty gap widens over time due to decreasing income for women at older ages. Women aged 75 to 79 are three times as likely and those over the age of 80 are twice as likely to live in poverty compared to men. While it's self-evident that working women must be aware of the unique challenges they could face in retirement, simply understanding these issues won't be enough to bridge the very real gap created by systemic and demographic forces far beyond their control. That's why the National Committee to Preserve Social Security and Medicare launched our Eleanor's Hope initiative. We're not only educating but also advocating for legislation that addresses the inequities threatening millions of retired women while also working to elect lawmakers who share our vision of retirement equity for women.

There are a number of proposals which, if adopted, could significantly level the playing field for women and reduce the threat of poverty in their old age:

Gender Pay Equity. Eliminating the wage gap that limits women's earnings is essential to helping our daughters and granddaughters save for their own retirement. Congress should strengthen and reform the "Equal Pay Act" by putting an end to pay secrecy, strengthening workers' ability to challenge discrimination and bringing equal pay law into line with other civil rights laws.

Caregiver Credit. Compute the Social Security benefit by giving an annual caregiver credit for each year of caregiving so that total earnings for the year would equal 50 percent of that year's average annual wage. Caregiving service years would be those in which an individual provides care to children under the age of six or to elderly or disabled family members. Up to five family service years could be granted to any worker.

Improve Survivor Benefits. Increase the benefit paid to a surviving spouse to an amount that is equal to 75 percent of the total combined benefits that were paid to the couple prior to the spouse's death, capped at the benefit level of a lifelong average earner.

It's been more than 50 years since our nation acknowledged and attempted to address, with passage of the Equal Pay Act, the gender wage gap which unfairly targets half of our population with billions in lost wages. Yet, at the current rate of change, it will take another 40 years to close that gap. That's simply not an option for generations of American women who will continue to face the consequences of income inequality from their very first day on the job until they die. 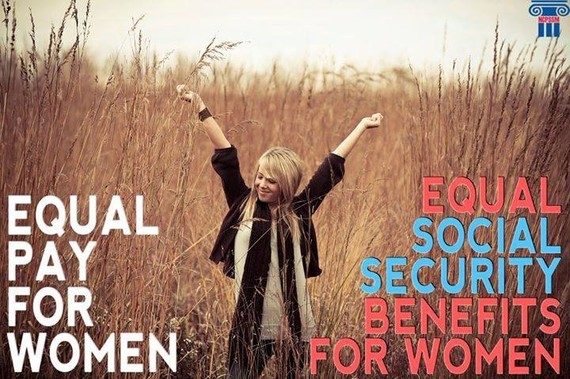