It is standard procedure for my three-legged cat Baby to make a flying leap into any box that makes the premises (and he is not alone, as Catsinboxes.com proves). He is also unabashedly an over-eater, binging at every possible opportunity....and then...purging to retain his svelte figure. About five minutes passed before I realized he had disappeared into the Vente Privee box and was happily chowing down on the popcorn-like packaging material, which was biodegradable and apparently, edible. So what exactly is this stuff slipping into boxes? 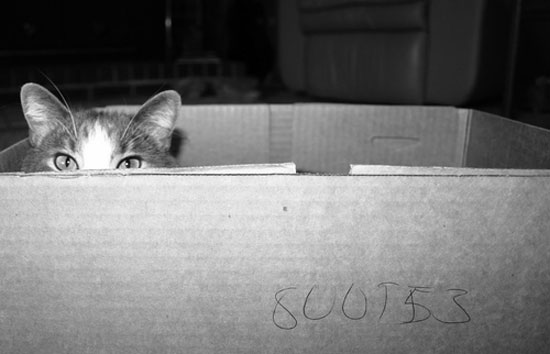 Well, it smells like corn and tastes like puffed corn cereal (we don't recommend eating it). According to Free Patents Online, these biodegradable and edible composites are made of:

a mixture comprising fiber mixed with a non-petroleum based, biodegradable adhesive formed by modifying a starch, protein, or protein-rich flour. The mixture has a moisture content of less than about 20% by weight, based upon the total weight of the mixture taken as 100% by weight. The mixture is then molded at pressures of from about 150-600 psi and temperatures of from about 150-500 degrees Fahrenheit to yield a final composite having a compressive strength of at least about 5 MPa. Preferred fibers include those derived from straw, corn stalks, sorghum stalks, soybean hulls, and peanut hulls. Preferred modifiers include NaOH, urea sodium dodecyl sulfate, sodium dodecylbenzene sulfonate, and guanidine hydrochloride. 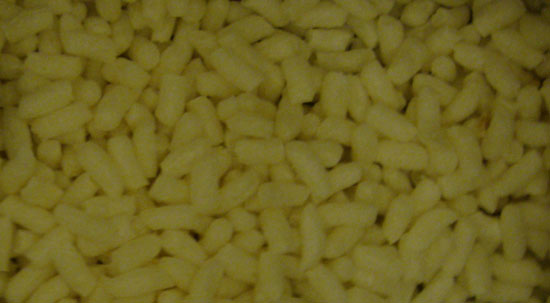 The packaging shipped to me.

New technology has also made biodegradable packaging slimmer and water resistant, a perk for many manufacturers. So why is this a good thing? Packaging is one of the most wasteful and unnecessary components of our modern day life. When you pull out layer upon layer of bubble wrap all to reveal a single book, you are just the end of a long energy- and resource-rich journey. According to Recycling-Revolution.com (PDF), packaging represents about 65 percent of household trash.

Luckily, the incident neither turned Baby off boxes, nor influenced his digestive system.

More From Mairi Beautyman on Huffington Post
Could You Live Without a Refrigerator?
The Octuplets and their Massive Carbon Footprint: 30,400 Disposable Diapers and Counting
The Top Five Most Popular New Year's Resolutions And How Being Green Can Help You Keep Them
Five Comics Giving (Anti) Environmental Messages
Obama, Bring on the Green White House
Five Ways to Green Your Yoga Workout