Little Dude is 5 and at the stage where everything is a question. "How do you spell 'Daddy'?" "Where is Mount Rushmore?" "What is a 'wintry mix'?" (Thanks to Nemo, we've been watching a lot of the Weather Channel lately.) "Will you die before me?" "What will kindergarten be like?" He believes my husband and I have all the answers and he isn't shy about asking for them. I love that he thinks we're omniscient. I would also be lying if I said I didn't regularly consult the Internet to preserve his wildly incorrect belief. Without Google it is possible my son would still think there are "sixty-seventy" planets.

My teenage stepson, like most high schoolers, asks fewer questions. But because he's in the midst of big life changes like dating, driving and thinking about college, my husband and I pepper our conversations with information we think he needs to hear. We aim for subtle and hope to penetrate his independent adolescent mind. While driving him to a friend's house, we may note casually, "It's best to keep both hands on the steering wheel at all times," or "Pump the brakes gently when stopping in the snow." We dispense relationship advice during movies, like "We know Bond is cool, but he has lousy taste in women. They're hot, it's true, but you can do better." When he catches us trying to respond to email when we shouldn't be, we nod and say, "Yes! A cell phone is not a substitute for real human interaction." We try for funny like, "College is a time when you learn to balance freedom with hedonism, so in between the parties you have to study," and "Gatorade and a protein bar do not constitute a meal." He definitely does not think we know everything, but we keep talking. Just call me Sisyphus.

I think we're giving the boys good advice. Together, we have over 80 years of grey hair, mistakes, successes, hard knocks and embarrassments to pull from. But late at night, once they're asleep, I worry. And an explanation for my anxiety came from an unexpected source.

Last week, when former New York Mayor Ed Koch passed away, a friend posted a quote of his on her Facebook page. The late mayor once said to a reporter who badgered him about a particular answer: "I can explain it to you, but I can't comprehend it for you."

While I never expected that a lifelong bachelor with no kids would give me the best piece of parenting advice I've ever gotten, there it was.

Not that Koch meant to help me with his flippant put-down of an annoying journalist. But I take wisdom wherever I can get it, and I read his words as a reminder about what I can do for my kids, and more importantly, what I can't.

Because here's the thing: We can give our kids information, we can lay before them a buffet of facts, observations, war stories and personal experience, but we can't process it for them. We can't comprehend it for them. By some magical alchemy they will have to take what's available to them and make sense of it on their own. Or not. It's the "or not" that keeps me up at night.

Comprehension, I remind myself, often only comes after failure or pain or mistakes. I hate to see my kids suffer. I give them information to help them avoid pitfalls. I cringe when they make mistakes, but I know in some circumstances it's the only way they'll really "get" something. I didn't understand the immense responsibility involved in driving a car until I had my first car accident. (Yes, I did say "first." Let's just move on, OK? I'm trying to teach a teenager to drive and I'd rather focus on my stellar driving record over the past decade.) I didn't know why it was so important to be both kind and honest in relationships until I treated someone badly. I learned how to balance frat parties and 8 a.m. classes only after a dismal first semester at college. (In all fairness, I actually learned not to take 8 a.m. classes, but sometimes we learn the wrong lessons. That's part of the process too.) It wasn't that I didn't have information about all those things before they happened, but I didn't grasp the bigger picture until I made some mistakes. I expect it will be the same for my kids.

As parents, we may think our job is to fill our kids with facts, tiny protectors from hardship, but there aren't enough warnings in the world to prepare them for the challenges ahead. Even if we could, would we want to? Facing those challenges is the best way -- and frankly, the only way -- for them to understand the messiness and purpose and joy of life. Life is about more than data; it's about experiences and the feelings you can't explain and the moments when you see things clearly for the first time. Our job as parents is to be here when they finally appreciate everything we were trying to tell them and, rather than an "I told you so," remind them what Albert Einstein said: "Any fool can know. The point is to understand." 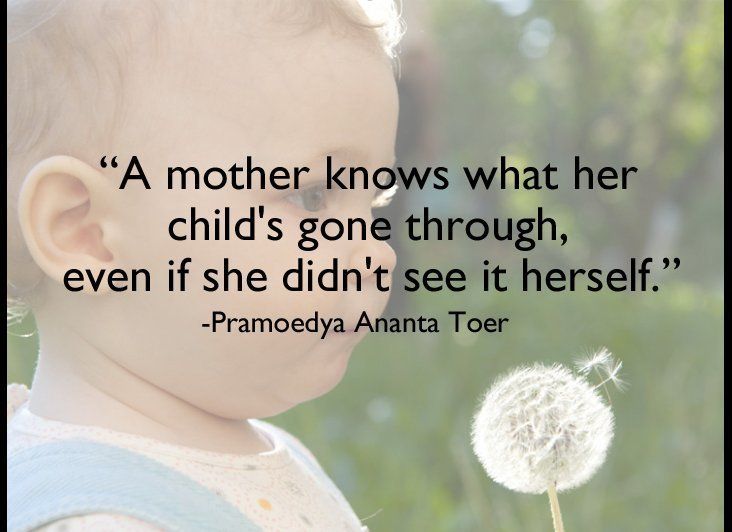