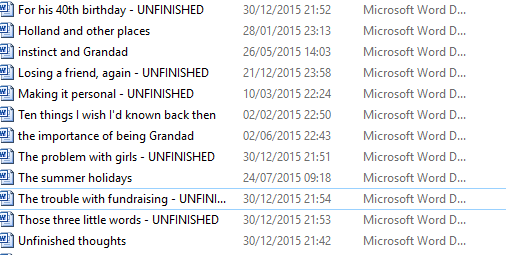 I haven't written a blog since June. Actually, that's not strictly true; I haven't FINISHED a blog since June. I've started several (too many to admit) -- some on screen, a couple on discarded till receipts, and the rest only in the late-night sleepless caverns of my mind. Several half-written, incomplete, unpublished thoughts. For someone as OCD, stubborn, fearful of failure and afraid of the unknown as me, this is problematic.

So why have I left them hanging? Why has someone who hates to leave anything unfinished, failed to complete so many thoughts? There are some, I suspect, which I knew would never reach print. Even as I started them, I knew they would either never be completed or could never be published. How, for example, could I let others read about my guilty internal struggle when my friends bring little girls into the world? About a certain unspoken pain and wistfulness which I have felt, beneath the excitement and joy, when several of my friends have had beautiful, precious daughters this year? That particular blog has been started and deleted and started again several times -- my own personal therapy/confession/punching bag -- but nothing more.

Another impossible-to-finish or allow-to-be-read musing was about losing a friend, again. I know: to lose a friend once can be seen as misfortune, to lose one twice is simply careless. Especially when it's the same friend. Even more especially when actually, you hadn't managed to find him again after the first time and yet still, somehow, losing him again hurts. The first blog I ever published was about losing this friend; three years later it seems ridiculous to be in the position of having the same thoughts and feelings and still being unable to just "let it go." Much like the friendship, I suppose, the blog remains hanging -- not quite finished, yet not able to continue. 'Closure', I think they call it. Or lack thereof.

Others have remained incomplete simply because life moves on: a blog started in a particular moment about a particular experience, often just doesn't feel right when revisited a week, or more, later. I started one blog the same night that my daughter's downstairs bedroom was finally completed. We had spent the evening building her bed, ready for her to sleep there for the first time the following night. It was a blog about, as is so often the case, mixed emotions: elation that the long-awaited build was finally finished; relief that the treacherous climb/carry up and down the stairs was over; fear of her sleeping downstairs; sadness that the adaptation was needed at all; guilt that she would no longer share a bath with her brothers. They were raw emotions that night, but when I revisited the screen two weeks later, they had eased. We'd adapted to the new situation, as humans do, and, whilst the relief, sadness and worry all remained, those initial anxieties and fears just didn't seem so important anymore. We'd moved on to the next challenge; the moment had passed.

Other moments have come and passed and come again. The worryingly entitled "The Trouble with Fundraising" is another which has had several starts and deletions. Mostly started the morning after a 'successful' fundraiser, I've tried to express how the sense of elation and achievement of the night before is then replaced by the sinking realization that your daughter still can't talk. It sounds ridiculous, I know, but perhaps anyone who has ever invested time, energy and emotion into taking just one tiny step on a long and uncertain journey, will understand. An event can go better than I had ever hoped, but when the guests leave, the clearing up is done and the money is counted, my eight year old still needs her nappy changing. And it leaves me deflated. Perhaps it is fitting that I have never quite managed to get that particular blog finished -- the fundraising journey's destination is not yet reached -- the tiny steps continue.

But this is not the News -- I have not only been writing (or half-writing) about the bad stuff. The fundraising blog, for example, has its counterpart: thoughts I have written before but which have proved true time and time again this year. Last Christmas Eve I wrote 'For Hannah, the Night Before Christmas' - some thoughts not only about the amazing people who surround us and whom I might never have met if life had worked out differently, but also about the little girl (my little girl) who has brought these people together and makes them love her unconditionally. There have been innumerable occasions to inspire the same sentiments this year, but when written down they seem schmaltzy, repetitive, inadequate. Perhaps "see last year's entry" will just have to do!

Yet this year has not been without its reasons for schmaltz either -- the ashamedly brief scribble intended for my husband on his 40th birthday: a celebration of the man he is and the remarkable father he has become, in the face of something he could never have prepared for. There was little more to the composition than that -- my attempt to find words for how I believe our daughter feels about her Dad proved too difficult. Putting words in Hannah's mouth is something I neither can, nor really want to do. She will say it herself one day, until then I will let her eyes do the talking and hope my husband understands that their vocabulary is far wider than that of my laptop!

Finally, my favorite, and the one most likely to actually reach completion: another blog about my daughter's eyes; the simplest joy of reading Hannah a bedtime story and hearing her tell me, without any words, that actually she does quite like me after all. The "I love you" which I am finally starting to realise doesn't need to be said out loud to be understood. It, too, will be a brief blog, since that's pretty much the whole story -- no twist, no lament, no wistful musings, just a sleepy bedtime and a little girl who can say more with her eyes than her mum can with any blog -- finished or not.

In a way, these half-written blogs and unfinished reflections sum up the past six months pretty well: a collection of emotions and experiences with few clear ends or answers, with dangling ellipses and uncertain next chapters. Right now, there are four situations around Hannah which are uncertain and complex, and that's just looking ahead to the next two weeks! 2016 will not be without its reasons for sleeplessness and late-night scribblings, of that I am certain. Perhaps I should resolve (as people do like to resolve things at New Year), to always finish these thoughts I begin. But I'm not really sure it matters.

In some ways, unfinished thoughts are apt: poetically, a metaphor for life with a condition like Rett Syndrome -- a condition as yet without answers, an unknown ending, a story I can't finish; or, less poetically, simply the reflection of a mum with two jobs, three children and a mind less capable of clarity than when she was twenty! Either way, they're the way things are, and in spite of the OCD tendencies, I'm fine with that. After all, there are more important things to ensure get finished: from the next tiny step of fundraising on the journey, to saying 'thanks' to all those amazing people, to enjoying tomorrow's cuddle with my friend's little girl, to savouring tonight's bedtime story with my own. These are the things I resolve to make happen, and maybe one day, if there's time, I'll even write about them too. Happy New Year. 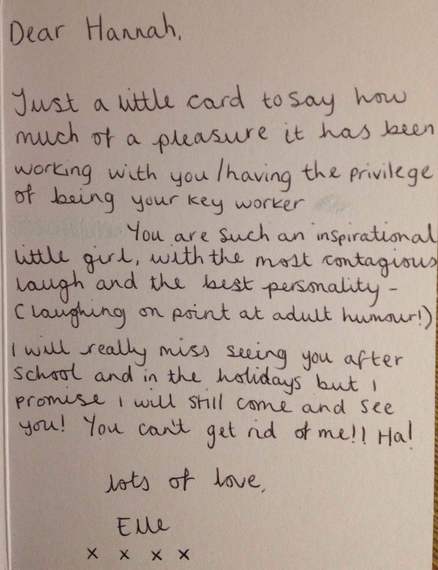