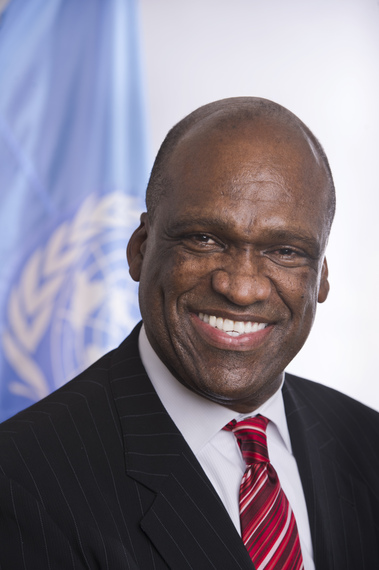 The sitting president of the 68th United Nations General Assembly John Ashe, a trained bioengineer from the Caribbean islands Antigua and Barbuda, has for a long time dedicated his energy and expertise to the causes of climate change and sustainability.

According to a biographical note published by the UN Department of Information:

Ashe successfully led negotiations that resulted in Chapter X of the Johannesburg Plan of Implementation at the 2002 World Summit on Sustainable Development, and co-chaired the United Nations Conference on Sustainable Development (Rio+20) in 2012. In 2004, he presided over the thirteenth session of the United Nations Commission on Sustainable Development, the body responsible for reviewing programmes on the implementation of Agenda 21, the blueprint for rethinking economic growth, advancing social equity and ensuring environmental protection. He was the first Chairman of the Executive Board of the Clean Development Mechanism of the Kyoto Protocol to the United Nations Framework Convention on Climate Change. Ashe also chaired the Convention's Subsidiary Body on Implementation and, most recently, the Ad Hoc Working Group on Further Commitments for Annex I Parties under the Kyoto Protocol.

According to Ashe: "I still have a passion for these topics. I am no longer involved in the day to day negotiations as far as climate change goes, but I still do follow the issues. The most recent event where I was involved in my capacity as President of the General Assembly was the climate conference in Warsaw."

He set the stage for sustainability post 2015 by making this issue the last General Assembly's main theme. Early on he warned that climate change can have severe, disruptive consequences for economies across the globe, a topic that will be discussed at this week's World Economic Forum (WEF) in Davos, Switzerland.

In an interview with news channel Al Jazeera, Ashe pointed out:

"In the Caribbean, one of the biggest dangers -- and it's frequently overlooked -- is the effect of a hurricane on the economy. One hurricane can set back a country's economy by decades. And if a scientist predicts that these are going to be more frequent, you can imagine the alarm bells that are ringing down there in terms of climate change."

When you move on from the GA president's office, how do you hope to stay involved with the urgent matters of sustainability and climate change you have dedicated so much time and expertise to?

I don't know what happens on September 16, 2014, but the interest in the issues will certainly not die away; I will still find some way to stay engaged.

A recently leaked draft report from the Intergovernmental Panel on Climate Change, published last week by the New York Times, described the following, "Another 15 years of failure to limit carbon emissions could make the problem virtually impossible to solve with current technologies, experts found." How would you comment on this statement, what should be the immediate consequences?

These findings are not new. Just today Secretary General Ban Ki-moon gave a briefing to member states on his priorities for 2014 and he reminded member states that he intends to convene the climate change summit here at UN headquarters in September of this year. (A summit that will prepare member states for the climate change convention in Paris in 2015.) In my summing-up of the meeting, I reminded member states that the goal we all hope to achieve is a legally binding agreement, attained by all parties to the climate change convention in 2015, at the conference in Paris. But it should not be an agreement for the sake of having one. It should be ambitious in content with defined targets and timelines for every single party, irrespective of whether it is classified as an industrial country or a developing country.

An NBC report from yesterday describes that the number of Americans who don't believe in climate change, rises. How do you explain that trend?

They say leadership starts at the top. Recent developments here in the US would lead one to the sad conclusion that the interest within the current US administration seems to be waning. It was never going to be easy, but I think with the other concerns that have risen, particularly on the political front, it doesn't leave one with much hope that we will suddenly see an upwelling of interest in the climate change issue here in the US. One would hope that this would not be the case, but if one looks at the climate change induced events that have taken place outside of the US, I think it would be a sad commentary if citizens of this country did not at least take note.

Once a clear environmental leader but now consumed by the looming economic crisis, the European Union is likely to set a more cautious tone for the global debate on climate with new green energy guides released this week. What would you wish from Europe in terms of climate change, reduction goals in carbon emissions, and expansion targets for renewable energies?

I am not aware of this particular development, but if that is the cause of action taken by the EU than I think the message sent would be negative. We who have followed this debate for quite some time got quite used to the EU being in the forefront. I simply hope that that would continue to be the case, especially because the seminal conference will take place in Paris in 2015.

Recently I heard the German scientist Ulrich von Weizsaecker speaking at the Open Working Group on SDG's about the possible need to provide a psychological crutch for the global North regarding the implementation of reduced consumption and carbon emission, if the South would signal the willingness to cooperate. Is there a bit of a global North-South, South-North blame game going on? And if yes, how could that be avoided, going forward?

There have always been differences in approach regarding the climate change question between the North and South and that probably will be so for quite some time. There is a feeling that the industrialized countries were supposed to take the lead and they have not yet done so. I am sure those would argue differently. And until that happens, developing countries, where the emphasis has always been on the eradication of poverty, should not be asked to assume additional burdens. We have a global problem that requires a global solution, and for that to happen each and every country has to assume some sort of responsibility. I think time is certainly running out and until the proverbial all hands are on deck we will be forever looking back and say twenty years from now, we should have acted faster. And certainly we should have done so, collectively.

How effective in your opinion has the 68th GA session been in order to present and push the agenda for sustainability efficiently within the UN system and publicly?

The theme of the 68th session is the post 2015 development agenda. We are looking at the broader development question and development agenda and climate change could be a key part of it. We should keep in mind that climate change, as far as negotiations go, are handled outside of the GA as per the wish of its member states. But at some point in time, it will all go together, hopefully in 2015.