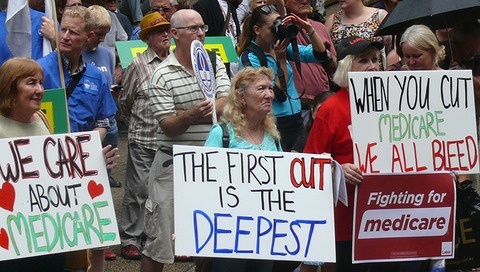 July 30 marks a very important anniversary in our modern political history. Fifty years ago in 1965, President Lyndon Johnson signed Medicare and Medicaid into law, creating two programs that would disproportionately improve the lives of older and low-income Americans, especially women. Fast forward to 2015, and both are very much under siege. Nowhere is the struggle starker than in competing 2016 budgets now on Capitol Hill.

Medicaid is the joint federal/state program that provides low-income folks with health care. The proposed Republican budget repeals Obamacare, along with the Medicaid expansion that's part of it. The Medicaid remnants that survive would be turned into block grants, allowing states to pick and choose who gets covered and what kind of benefits they get, with zero federal oversight. According to CBS News, that approach makes it easier to cut these programs without saying how many people would be dropped, or how their benefits would be cut. Since poor women under retirement age and their children are the biggest group of beneficiaries, they'd also be the biggest losers.

In addition, the Republican budget takes away the guarantee of Medicare and turns it into a voucher program -- not only subject to the whims of insurance companies, but inevitably becoming

too paltry to cover all but the barest of medical needs. The importance of Medicare as a source of women's health coverage cannot be over-emphasized. Older and disabled women make up more than half the total beneficiaries, and 70 percent of those over 85. And because females have more chronic health conditions like arthritis, hypertension and osteoporosis, they're more likely to need institutional care. Seventy-seven percent of Medicare beneficiaries in nursing homes, assisted living and other long-term care facilities are women.

While it's true that the Obama budget would increase some copays for home health care, it would also close loopholes that allow some high-income individuals to avoid Medicare and Social Security payroll taxes. Closing those loopholes could provide as much as $10 billion more per year by the end of the decade to bolster other parts of the program.

Though neither budget will likely be passed in the form originally proposed, with Republican majorities in both houses of Congress the compromises are sure to favor more cuts. So, unfortunately, the this summer's 50th anniversary of Medicare and Medicaid is likely to be a less than happy one for those that depend on them most -- namely women.