"There's something bizarrely liberating about being able to stand up on stage, as a character, and say 'I was raped.'"

Perhaps not many actors would agree with this statement, but Gemma is telling me this after a rehearsal of my upcoming short play, in conversation with myself and the theatre director Tessa Hart. Together, we are collaborating on just one of 12 pieces in the upcoming UNHEARD 2015 Festival in London, a new writing festival exploring themes around sexual abuse and violence through performance. Due to take place this weekend, February 19-22, at The Bread and Roses Theatre in Clapham, the festival may not be the most feel-good of entertainment options out there. But for those of us involved -- and perhaps a great many survivors out there -- it's a very important project. 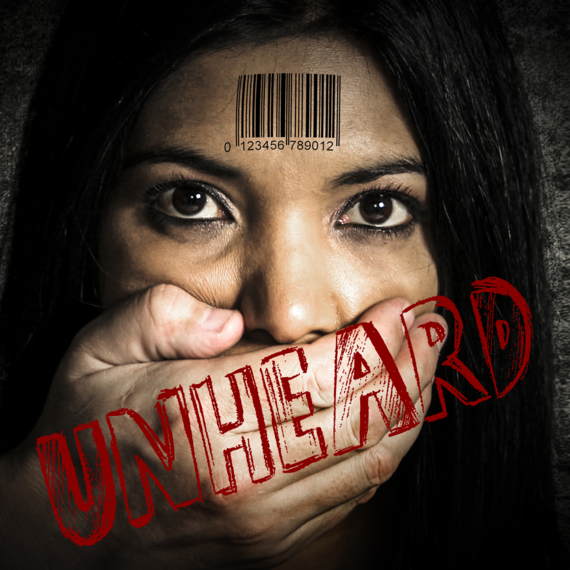 "There is a huge social taboo regarding the issue of sexual violence," says Tessa, founder of UNHEARD. "Oftentimes, it's a topic that people want to avoid."

In fact, silence is most often the resounding response to the issue of sexual violence. Let's pretend that didn't happen. Let's ignore our friend's story of being raped. Let's just tell narratives that are positive and feel-good, even though they may mask the reality of what many people experience.

The reality is that many people out there -- more than we're willing to admit -- are survivors of sexual violence. As the One Billon Rising campaign recently reminded us on V-Day, it's estimated that every 1 in 3 women (approximately one billion individuals on this planet) will be beaten, abused, or raped in her lifetime. Take, for example, the creatives involved in UNHEARD. Tessa is a survivor of sexual violence, I myself was raped when I was 29 and Gemma when she was 19: "Each of us have had very different experiences, and yet, when you get a writer, an actor, and director -- all of us rape survivors -- in the same room, there is a collective urgency to share the common truth of our stories with an audience. "

"As an actor, you look for something within a character which resonates with you," Gemma explains. Even though she has told only a few friends about her own assault, the role of playing a rape survivor offers her a chance to explore the complex emotions she's had to encounter in her own life. "It's like I'm playing a version of myself, but with none of the negative connotations of being a rape victim.

In my play, "Everything's Normal," Gemma's character portrays how an adult rape survivor, years after her assault and largely recovered, still needs to mentally negotiate around the fact of her rape in a job interview, on a date or at a dinner party with friends. I wanted to address the the pressure rape survivors can feel in trying to integrate back into everyday "normal" living. While I've already written a great deal about rape, this was a slightly different angle to explore. And in fact, the diverse line-up at UNHEARD 2015 presents a range of angles in these stories of sexual abuse and violence.

For Tessa, this multitude of voices inspired her to found UNHEARD in 2013, and expand the festival significantly in its second edition. When she made the call-out for plays exploring sexual violence, she received over 250 submissions from around the world, many with personal messages from artists grateful that such a festival existed. "Clearly, there is a need for people to tell these stories, and I believe there is equally a need for audiences to hear them," she says. In addition to scratch nights featuring short plays like my own, there will be rehearsed readings, a poetry event, and repeat performances of The Vagina Monologues, Eve Ensler's iconic play which sparked the V-Day and One Billion Rising movement.

Talie Melnyk is traveling from New York to present the UK premiere of her one-woman play Maison des Reves. Already an award-winner from the fringe circuit in New York and Canada, the play tells the true-life story of a woman in Imperial Russia, who killed over 300 men, seeing it as her duty to liberate women of her community from the brutality of sexual and domestic violence. Obviously, an extreme case of what can happen with this issue, but Talie explains that audiences have been incredibly supportive of the play. One audience member came up to her after the show to share her own story: her own mother had died of domestic abuse, and in seeing the play, she had "found a huge sense of empowerment and release."

Perhaps it's that same sense of release which we are hoping will happen with UNHEARD -- both for the artists involved and for audiences. As Talie says, "It's important to put our stories out there, the broken, unspoken parts of who we are. If these stories make people uncomfortable, that's a good thing."

That discomfort with the topic has recently been challenged in the media -- and by this this, I don't just mean the rape story lines in blockbuster TV series like House of Cards or Downton Abbey. I mean undergraduate Emma Sulkowicz's ongoing "Mattress Performance" to protest her alleged rapist's continued presence on the Columbia University campus, and the plethora of university rape victims speaking up on social media, and every single one of Bill Cosby's victims who has come forward with her story, even though it might bring stigma and scrutiny onto herself. Survivors' stories are coming to the fore, and live theatre -- perhaps the most immediate and visceral of art forms -- can play an important role in opening up the public understanding about sexual violence.

Of course, rape has haunted theatre for centuries, but it's rarely represented in a nuanced, realistic way, drawn from the experience of the survivor. Just think of the climax of A Streetcar Named Desire -- Stanley Kowalski rapes Blanche DuBois (off-stage, of course)-- and she is ruined for life. I heard a similar phrase in the media after after news of my own assault spread in Belfast -- "this poor girl, her life is ruined" -- a woman said on the radio. But that is perhaps one of the most damaging and pervasive tropes about rape which gets propagated. Yes, sexual violence can have a devastating effect on one's life. Yes, your life may never be the same after that experience. But no, it doesn't mean you're permanently ruined. You can recover. You can reclaim your voice and share your story, so others can find strength in it. This weekend, audiences will have a chance to hear at least some of those stories which normally go unheard.

UNHEARD 2015, produced by Goblin Baby Theatre Company, will take place Feb 19-22 at The Bread and Roses Theatre in Clapham. Most tickets cost £ 3-7 and can be purchased online here. Profits from ticket sales will go to nia (ending violence against women and children).