The Obama administration is running into a somewhat surprising roadblock in its final push to get Americans enrolled in Obamacare ahead of the March 31 deadline: The nation's uninsured are increasingly suspicious of the law.

Fifty-six percent of those who identified as uninsured in a new poll conducted in February by the Henry J. Kaiser Family Foundation, a research institution, had an unfavorable view of the health care reform law, compared to just 22 percent who said they view it favorably. The uninsured now see Obamacare less favorably than they did when the enrollment period began in October. As recently as September, more uninsured approved of the law than disapproved.

The survey results illustrate just how deep a hole the Obama administration is in when it comes to gaining the support of those the law is most intended to benefit. Indeed, the new findings show the uninsured feel worse about the law than the public at large. Thirty-five percent of Americans approve of Obamacare and 47 percent are against it, according to Kaiser. 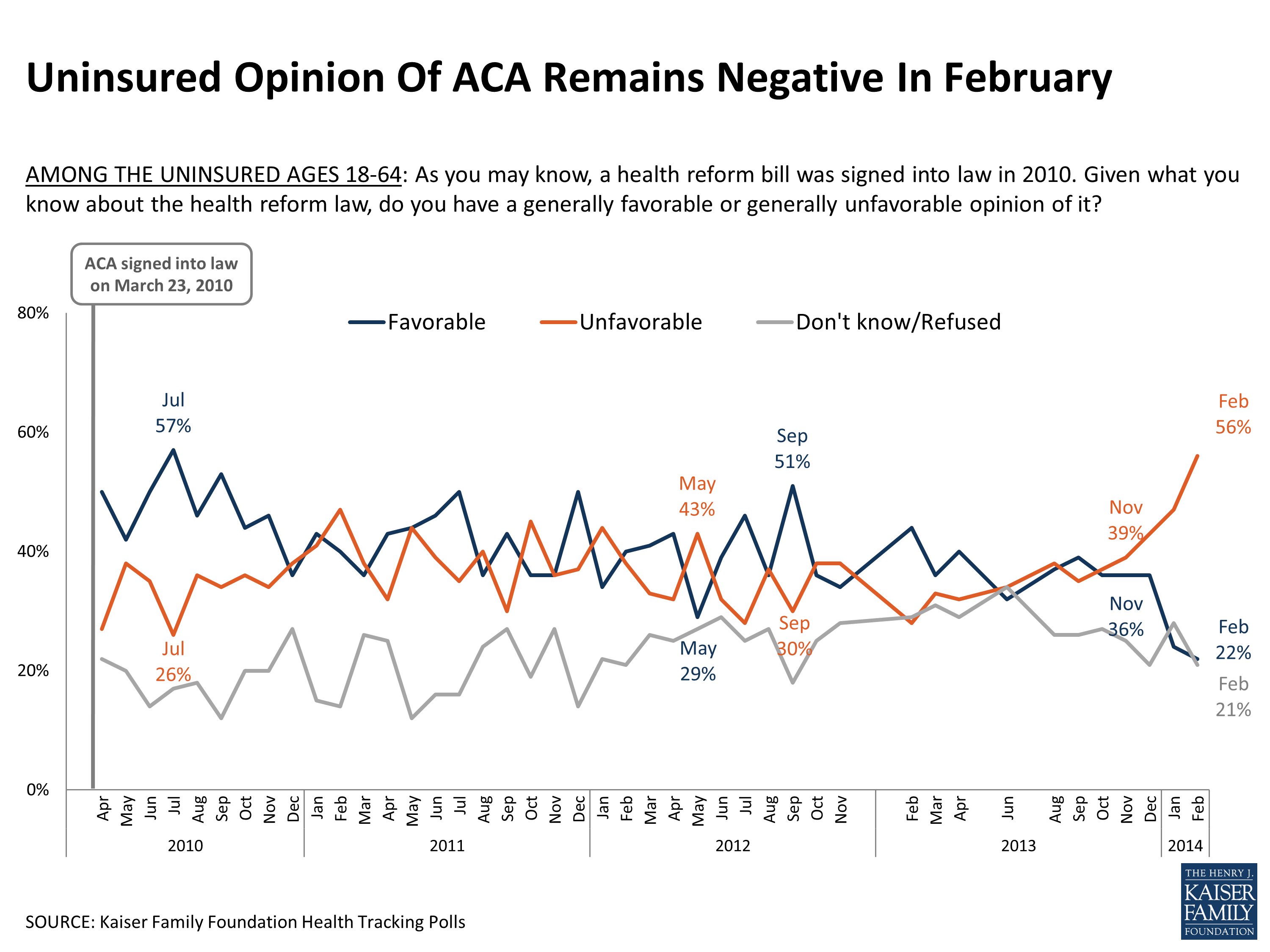 Now President Barack Obama and his allies are once again promising to ramp up their outreach efforts to get as many uninsured Americans as possible signed up for coverage.

"We’ve got more work to do. The fact is that we want everybody covered, not just some. That was always the intention and everybody now has the opportunity to get covered," Obama said at an Organizing for Action event Tuesday. "Right now, we’ve only got a few weeks left. March 31, that's the last call."

In addition to Obama personally promoting the law and the Affordable Care Act's health insurance exchanges offering an easy way for people to comparison shop, Vice President Joe Biden appeared on ABC's The View Tuesday, Health and Human Services Secretary Kathleen Sebelius is traveling the country to get the word out, and Democratic members of Congress are pushing back after Republican efforts to repeal the law.

At the same time, organizations supportive of health care reform like Enroll America and Organizing for Action are vowing a big, final push to boost enrollment numbers past the 4 million already signed up for private coverage.

An unfavorable opinion of Obamacare among a majority of the uninsured arose in spite of ballyhooed "microtargeting" campaigns to reach that part of the population, including those run out of the White House and those carried out by Enroll America, a nonprofit led by Obama campaign veterans. Using census data and other information, the idea was to target education, outreach and enrollment efforts in geographic areas with large concentrations of low-income, uninsured people who could benefit from the law's subsidized or no-cost health insurance, including cities like Houston and Miami located in states resisting the implementation of the Affordable Care Act.

The skepticism among the uninsured revealed by this survey isn't reflective of what Enroll America workers and volunteers hear from the people they contact, Anne Filipic, the group's president, said during a conference call with reporters Wednesday. The emphasis during those interactions is on practical concerns, not politics, she said. "The focus is on the opportunities that are available to consumers."

Enroll America announced its final push for 2014 enrollment Wednesday, calling it "Countdown to Get Covered." The organization, boosted by allied groups including the Service Employees International Union and the Planned Parenthood Federation of America, will stage more than 3,000 events across the country, including a bus tour through Ohio and Texas that will include local elected officials and leaders of religious organizations. The bus will visit Austin, Texas, during the South By Southwest music festival. Special emphasis will be placed on reaching out to African-Americans and Latinos and to students at community colleges.

"We know that people are hungry for these new options and eager to enroll when they find out what is available to them," Filipic said. "We will be pushing right up until the March 31 deadline to make sure as many Americans as possible are able to get covered."

The relatively small impact of these kinds of campaigns so far, however, is evident in another finding from the Kaiser Family Foundation poll: just 15 percent of the uninsured and 13 percent of respondents overall said they'd been personally contacted about the Affordable Care Act by telephone, email, text message, or door-to-door visit.

Combined with a relentlessly contentious political debate and overwhelmingly negative news media coverage of the troubled rollout of the health insurance exchanges, it's not surprising that uninsured Americans continue to have poor knowledge of the Affordable Care Act.

More than one-quarter of the uninsured report knowing nothing at all about the health insurance exchanges, with 37 percent more saying they know only a little. That compares with 24 percent who claim some knowledge and 12 percent who told pollsters they know a lot.

And 60 percent of the uninsured didn't know (or refused to respond) that March 31 is the last day to obtain health coverage for 2014 and to avoid financial penalties for violating the law's individual mandate requiring most Americans get covered. Less than a quarter of the uninsured knew about the March 31 deadline. In spite of all the outreach work and the publicity about Obamacare, lack of awareness remains a major obstacle, just as it did in September before enrollment began. 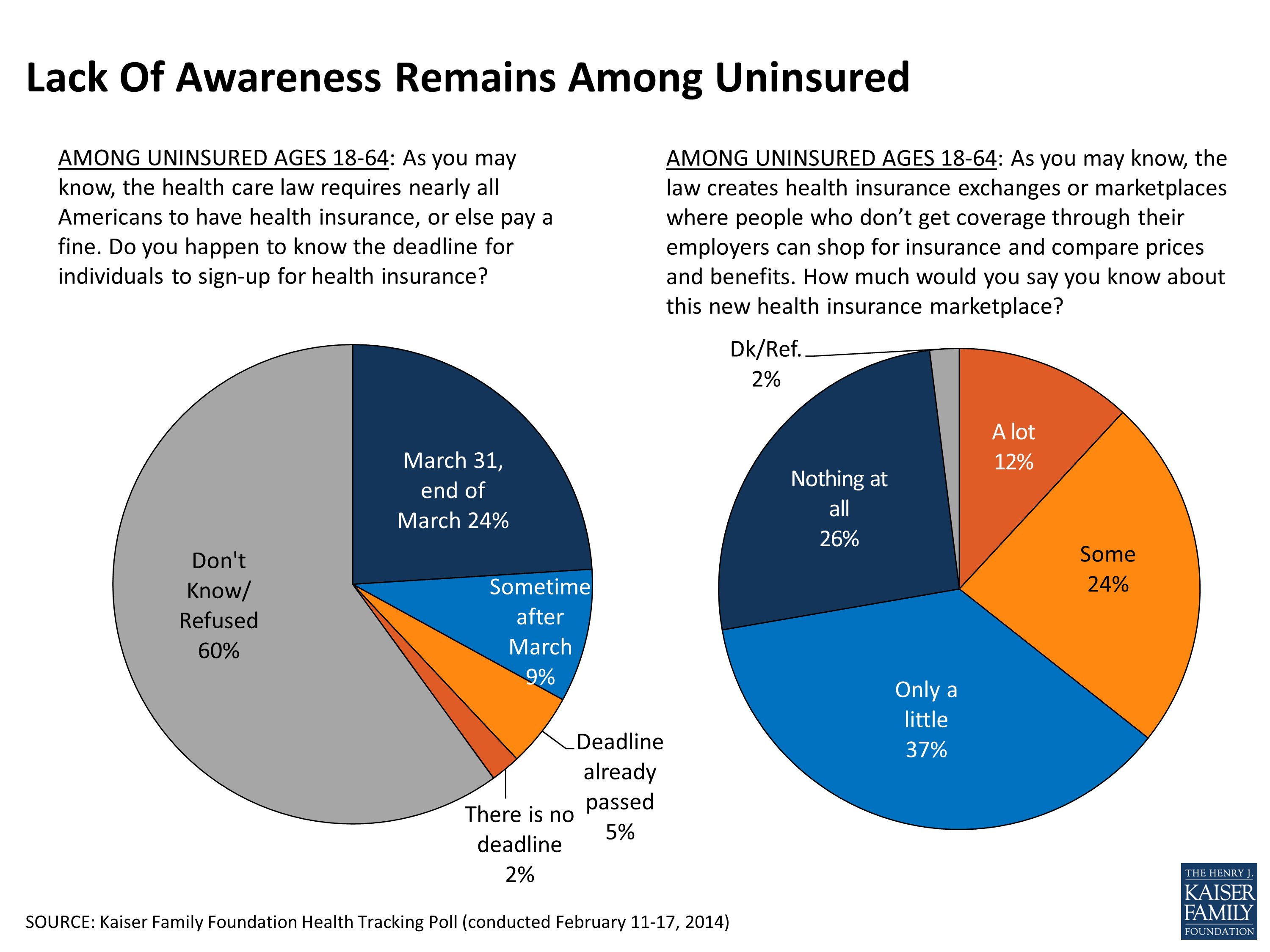