The rate of uninsured Americans continued to drop in the second quarter of 2015, according to a new Gallup survey. The decline is evidence of lasting improvement following a sharp first-quarter drop, thanks to the Affordable Care Act.

The Gallup-Healthways Well-Being Index poll, published Friday, found the uninsured rate fell to 11.4 percent, down from 11.9 percent in the first quarter and the lowest rate recorded since Gallup began daily tracking of the figure in 2008. 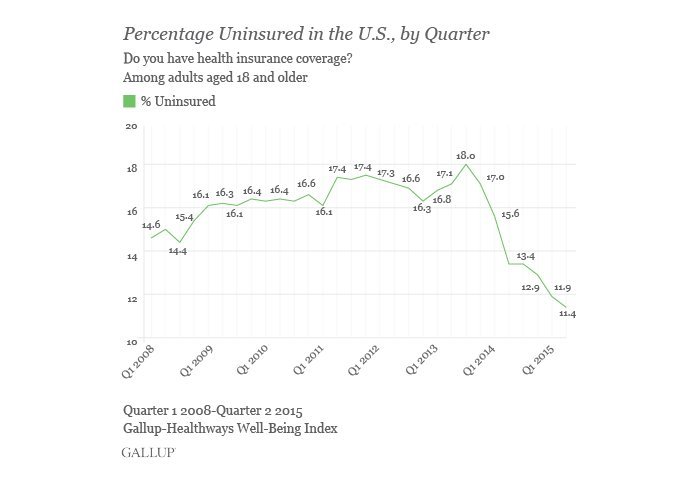 Gallup pointed to a notably sharp drop in the uninsured rate in February of 2015 -- during the year's first quarter -- coinciding with the Feb. 15 open enrollment deadline. The low rate of uninsured Americans held steady into the second quarter.

The survey found decreases almost across the board in uninsured rates among key subgroups, broken down by age, ethnicity and income. All age groups, except those over 65, saw a drop of at least 5.7 percentage points from the fourth quarter of 2013 to the most recent quarter. The rate of uninsured people over 65 years old remained stagnant during that period.

Whites, African-Americans and Hispanics all saw gains in insurance coverage. The percentage of uninsured Hispanics dropped the most: a 9.6 percentage point decline during that period. And all income brackets saw higher rates of coverage. Those with an annual household income of less than $36,000 saw a 9.9 percentage point drop in the rate of uninsured since the fourth quarter of 2013, the sharpest drop among the three income brackets surveyed. 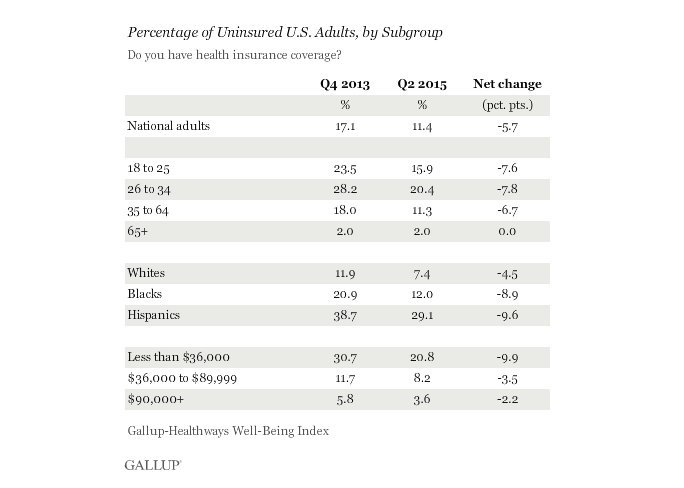 The results come only a few weeks after the Affordable Care Act survived its second major Supreme Court challenge. The court's ruling preserved health care coverage for millions. The next enrollment period begins on Nov. 1, 2015. However, Gallup predicts there won't be as notable a drop in the uninsured rate because "those who remain uninsured are likely the hardest to engage."

For a full rundown of the survey results, head to Gallup.

CORRECTION: This piece originally referred to the changes in the uninsured rates among several subgroups as percent changes, not percentage point changes. This has been adjusted.