The percentage of Americans without health insurance is at its lowest since Gallup started tracking such data in 2008.

According to Gallup's most recent data, 13.4 percent of Americans lacked health insurance in April. That's down from 15 percent in March and 18 percent in the third quarter of 2013. 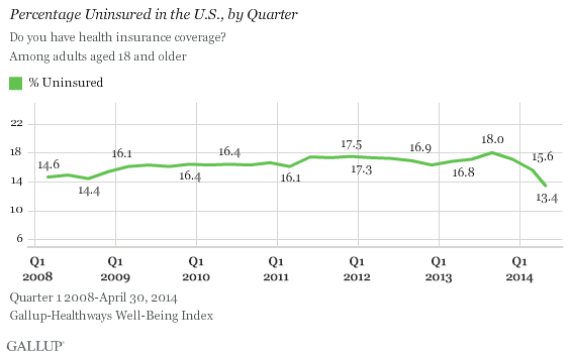 As you can see from the chart above, the uninsured rate has been steadily falling since the first open enrollment period for Obamacare began in October 2013. Since then, more than 8 million people have signed up for health insurance on the exchanges that were established under the Affordable Care Act. Though the launch was initially pretty messy, sign-ups ultimately surged in March and April.

Gallup's latest data is also proof that Obamacare is working to insure the people who need health coverage most. According to the poll results, which are based on telephone interviews with a random sample of 14,704 adults, the uninsured rate of people from households earning less than $36,000 a year has fallen by 5.5 percent since the end of 2013, more than any other income subgroup. The percentages of uninsured blacks and Hispanics -- who are more likely to be uninsured than whites, Gallup found -- have also fallen by 7.1 percent and 5.5 percent, respectively. Still, one-third of Hispanics remain uninsured, according to the Gallup data.

Despite the law's initial successes, Republicans still want to repeal it. Just last week, House Republicans drummed up anti-Obamacare support with a misleading survey that supposedly showed that those who signed up for health insurance aren't paying for it. According to Nobel Prize-winning economist Paul Krugman, the survey was "rigged" because it prematurely asked insurers what percentage of premiums were paid before they were even due for millions of people.