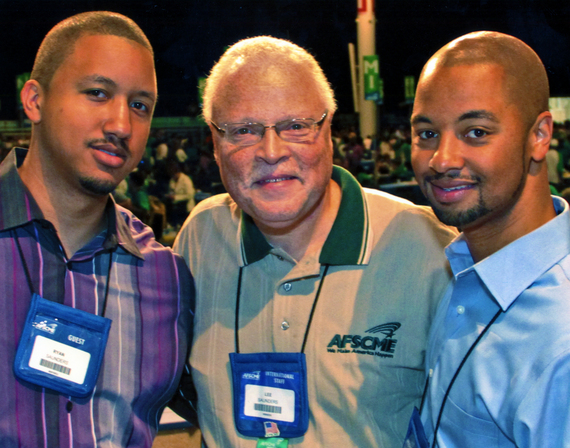 When I was growing up in Cleveland, my dad, Emmett Saunders, Jr. was a bus driver and a proud member of the Amalgamated Transit Union, ATU. Although he passed away in 2009, the lessons he taught about what it means to be a union member have never left me. That's why I'm proud to be a union son, and proud to be a union dad.

I can clearly remember sitting at the kitchen table and having conversations about the value of unions and what they meant for working families like ours. My dad had a strong role model in his own father, my grandfather, Emmett Saunders, Sr. Granddad was a principal, community activist and president of the West Virginia State Teachers' Association, the professional organization for the state's black teachers -- at a time when membership in the West Virginia Education Association was segregated.

My mom was a union member as well. After raising my brother and me, she went back to school, earned a college degree and taught at the local community college. One of the very first things she did was join the American Association of University Professors, AAUP. Union membership meant our family didn't have to struggle on low-wage, no-benefit jobs to make ends meet. It meant my dad could be confident that my brother and I would have more opportunities than he had.

Because of my dad's good union job, not only did my family have enough for the necessities, we had enough for extras, too. We went to Euclid Beach, the now-closed local amusement park on Lake Erie, a few times a year. We took road trips to different parts of the country and visited our family in West Virginia every summer.

But stories of union families like mine are becoming less common. The right to bargain collectively is under attack across the nation. As bargaining is weakened, working families like the one I grew up in are losing their footing and their hold on the American Dream. Unions work because, through solidarity, we can have a voice and the power that goes with that voice to support our families. That's how workers get strong, and how America gets stronger.

Dad certainly didn't get rich as a bus driver. He did not hobnob with CEOs and Cleveland's powerbrokers, and I don't think he ever attended a black-tie affair with the elite. But every day on his bus, he held his head high. He was ferrying the hard-working people of Cleveland to and from jobs that the city couldn't do without.

Sometimes I'd ride his bus at the end of the day. We'd drive through the neighborhoods of Cleveland, picking up steelworkers and public-service workers. I'd listen as my dad greeted every single passenger. Dad was as proud of his job as he was of his union. He knew how important his work was to the city, and he also knew that because he had a union, he had a seat at the bargaining table with his employer.

My dad inspired me to join the union as soon as I got a job working for the state of Ohio after college. The lessons he taught me about solidarity encouraged me to pursue a life of union activism. Now I'm the father of two sons, Lee and Ryan. And any day now, I'll be a grandfather.

I can't wait to pass on to my grandchild what I learned about unions: the value of standing with your co-workers to demand respect and fair treatment. The dignity of having a voice on the job. The peace of mind that comes with earning a decent salary and having solid benefits. The knowledge that after a lifetime of work, you can retire with security.

I don't know what my grandchild will grow up to be. Who knows what opportunities he or she will have 20 years from now? But I know one thing for sure: Just like me, my grandchild will be standing on a substantial foundation: a proud union legacy.