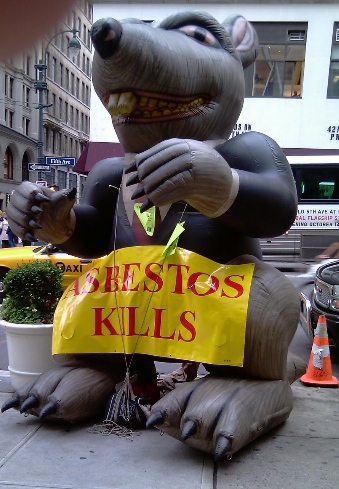 When a friend sent me this photo of a giant inflatable rat wearing a sign "Asbestos Kills," the first thing I thought of was Bahar Gidwani's March 2011 post on CSRHUB blog (full disclosure: CSRHUB is my sponsor). Gidwani's piece was inspired and also illustrated by a rat photo he'd taken near the Citicorp building in midtown New York, which was inspired by the rat's presence several years ago at a building next to his that employed non-union staff.

Why had it reappeared?

Gidwani connected the return of inflatable union rats to the resurgence of union activism following the Wisconsin government union protests. Apparently, unions sense a change in public perception, a new acceptance of their role in maintaining workers' rights. As union support grows, the huge inflatable rats, some up to 20 feet tall, have become somewhat beloved. According to the New York Observer, they even have a nickname, "Scabbies."

This year, the Scabbies have been adapted to bring awareness to a more pernicious issue, asbestos poisoning. By adding the sign "Asbestos Kills" around Scabbies' necks, the Asbestos, Lead and Hazardous Waste (ALHW) Laborer's Union 78 of NYC, Long Island and New Jersey is able to bring support for the Scabbies to their cause: only union labor is safe for asbestos removal.

Formed in 1996, ALHW has 4,000 members and 200 signatory environmental contractors, who remove about 90 percent of asbestos in the region. What they promise is safe removal of asbestos, in accordance with the maze of federal, state and local regulations.

But is the work the Asbestos Rats are protesting really sub-standard or just non-union? Or, as the Upper West Side blog asks, is this about a pissed-off union or a legitimate safety issue? The union arguments are the same at every protest location, that the landlord hired "a sub-standard company to perform deadly asbestos removal."

The fact is, removing asbestos safely is incredibly complicated. New York State's 221 pages of requirements include special training for workers, an engineering survey, assessments of worker exposure, plans for dust suppression, decontamination of all equipment used, a water tight dumpster for disposing asbestos materials, decontamination of workers (a three-stage procedure) -- the list seems endless and the rules difficult to understand and follow.

And there have been scandals around asbestos removal, with some companies having a record of violations and fines. So yes, there are substandard contractors that will cut the enormous expense involved in asbestos removal, which can run more than the cost of demolition. But crooked contractors are only one problem. In 2010, a federal EPA investigation uncovered a New York City safety inspector who had falsified results for 10 years, giving a clean report to over 200 buildings that were never inspected, for which the data was faked. So focusing a spotlight on the issue is warranted.

Despite all the precautions, 10,000 people in the U.S. are killed by the toxin every year -- most, but not all, workers who are exposed daily. In 1964, the American Medical Association published Dr. Irving Selikoff's group's study showing that over twenty years, most insulation workers would develop asbestosis.

Government union workers raise issues to maintain a just society, such as the right to collective bargaining. Now, the ALHW union is raising an issue that is even more serious, the removal of asbestos in a way that doesn't release its lethal fibers. Asbestos poisons not only ALHM's workers. The EPA estimates that 700,000 buildings plus tens of thousands of schools still have asbestos installed. That's a lot of asbestos that has to be removed. Regardless of their motivation, ALHM members are right to bring attention to the issue of its safe removal.