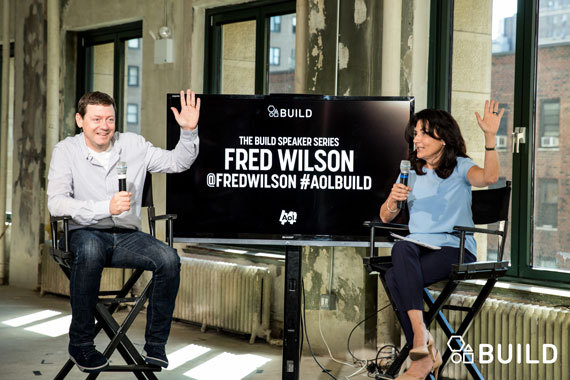 "This is the de-corporatization of AOL, and I am really digging it."- Fred Wilson

Needless to say, AOL BUILD equally 'digs' the presence of renowned Union Square Ventures co-founder, Fred Wilson at its 770 Broadway offices. 'The man, the myth, the legend' of venture capitalism shares how, why and what it takes to pique his interest, and eventually his investment.

Although Wilson first moved to New York City, circa 1980's, in an effort to please his future wife, the city presented Wilson with exciting opportunities that were his for the taking. Take them, he did launching a career that has changed the face of venture capitalism by exploring "the hybrid between Wall Street and start-ups".

In finding his niche, Wilson set in motion a staggeringly successful career investing in startups. Foreseeing the potential of Tumblr, Twitter, Foursquare and Kickstarter to become our generation's worldwide sensations, is what makes the Fred Wilson touch spellbinding.

Fred Wilson was kind enough to dispel the secrets behind his success-filled career, his creative mind, and his inspiring experiences.

Watch the full AOL BUILD segment below for his guidelines on how to launch a successful start-up, the art of transforming innovative ideas into cutting-edge products and his perspective on the future of tech, social and mobile.

AOL's speaker series, BUILD, is about sharing perspective, opinions, ideas and expertise form the outside in and inside out.