Union Street Guest House in Hudson, New York pulled a written rule off its website on Monday that charged newlyweds if their guests posted a negative review of the hotel on Yelp or another review website. Then, after claiming the rule was all a joke on its Facebook page, the hotel deleted that comment as well.

It all started Monday morning when the New York Post posted a story that pointed out the badmouthing rule: Couples getting married by the upstate New York hotel would have $500 taken from their security deposit for each bad review written by them or a wedding guest.

The rule, which has since been deleted from the hotel's website, read like this in its entirety, according to Business Insider:

If you have booked the Inn for a wedding or other type of event anywhere in the region and given us a deposit of any kind for guests to stay at USGH there will be a $500 fine that will be deducted from your deposit for every negative review of USGH placed on any internet site by anyone in your party and/or attending your wedding or event.

Translation: Even if it's cranky Uncle Charley who writes a nasty note on Yelp about his bed sheets being too tight, it's still you who is socked with a $500 fine.

As the backlash to the rule started, the hotel put up a note on its Facebook page saying the rule was simply an inside joke at the hotel.

"The policy regarding wedding fines was put on our site as a tongue-in-cheek response to a wedding many years ago," the Facebook post read. "It was meant to be taken down and certainly was never enforced."

Now, that post has vanished from the hotel's Facebook page, too. The Union Street Guest House did not answer the phone when we called for comment.

Joke or not, the hotel's plot to avoid negative reviews seems to have backfired. More than 500 people has given the hotel the lowest possible rating as of Monday. 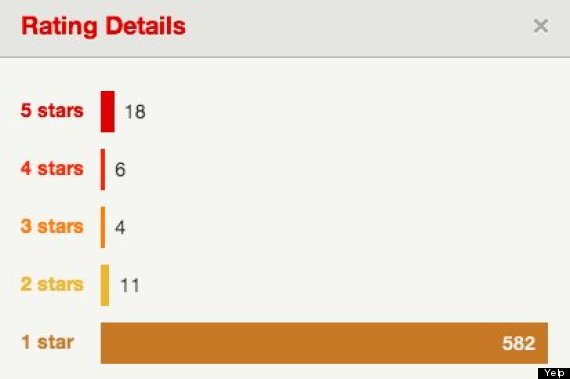 The business-rating company itself isn't pleased with the rating tactics.

"Yelp fights to protect free speech for consumers and against efforts to intimidate or stifle it," Yelp spokesperson Rachel Walker told the Huffington Post. "Trying to prevent your customers from talking about their experiences is bad policy and, in this case, likely unenforceable anyway."

However, Yelp said that it deletes reviews that aren't based on first-hand experience. Many of the reviews on Union Street Guest House's page are probably from people who just read the New York Post story on Monday morning.

For now, the Union Street Guest House's Yelp page is not looking great.

UPDATE: On Tuesday, the hotel's owner, Chris Wagoner, published a statement on Facebook apologizing for the policy.

"Quite frankly, I'm embarrassed," he wrote. "This indeed was a policy of the Union Street Guest House. It was originally intended as a joke and never something I told employees to enforce. However, since it was listed on our website it did represent an official policy."