Amid national headlines of growing tension between Blacks and police departments nationwide, some Harlem organizations and residents work to continue establishing a healthy relationship with local law enforcement agencies that depict a different story in the name of peace and partnership to mold and shape a renewed community.

On Martin Luther King, Jr. (MLK) holiday weekend, several community based organization partnered with law enforcement to commemorate the life and legacy of MLK. The 'Harlem Alphas' of Alpha Phi Alpha Fraternity, Inc., NYC Mission Society, New York City Housing Authority (NYCHA): Drew-Hamilton Community Center and the Drug Enforcement Administration (DEA) joined by NYPD's 32nd precinct and PSA-6 sponsored an afternoon of admiration and remembrance of a civil rights leader that dedicated his life to steer this country in the right direction so that everyone can have equal rights and equal access to opportunity.

The day was filled with engaging activities to include a panel discussion of those that were teenagers at the time of the civil rights movement, a video collage comprised of individuals reciting excerpts of MLK's 'I Have a Dream" speech and vignettes performed by children, teenagers and adults that reenacted events from the 1960's.

Also included were step shows, Harlem Swing Dance Society and Soul Steps, LLC. But a birthday is not complete without a cake. A black and gold frosted cake decorated with a picture of the flyer that was artfully crafted to promote the MLK birthday celebration.

An event co-chair Anthony Bright was delighted that the Harlem Alphas and The New York City Mission Society had a successful celebration in honor of Dr. King. The Drew-Hamilton Community Center was standing room only as attendees gave tribute to Dr. King.

The venue for the celebration was quite fitting for the occasion. It was held at the Drew-Hamilton Houses of NYCHA located in Harlem, NY. Appropriately named after, Monsignor Cornelius J. Drew, a staunch fighter for improved housing conditions in Harlem and Alexander Hamilton, an American statesman who was the nation's first Secretary of the Treasury.

While some of the same social issues from the civil rights movement still exist today in various urban metropolis cities and rural areas, one item on MLK's agenda that he did not have the chance to implement was financial empowerment of the oppressed. 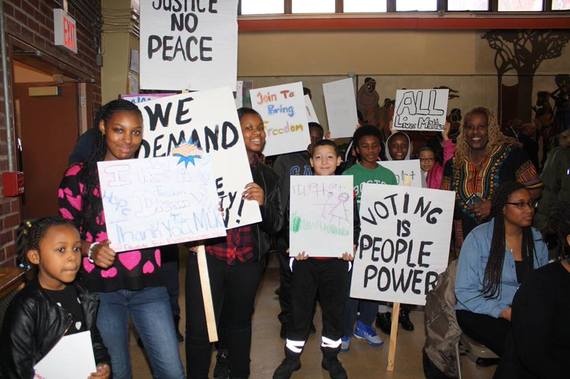 Fast-forwarding 50 years since the passing of the Civil Rights Act of 1964, there is still an opportunity to achieve what the American promissory note intended. Perhaps, today's civil rights movements should be deeply rooted in figuratively marching down 'Wall Street' and learning about financial markets. African-Americans have intrinsic equity in American capitalism that can be unlocked through promulgating financial literacy and active participation in the same system that they historical helped to establish through its free-labor, sweat, tears and enduring hope.