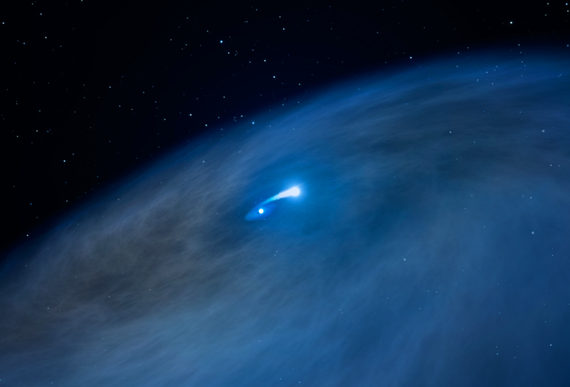 The Hubble Telescope has uncovered new clues surrounding a star's behavior never before seen in the Milky Way. Titled NaSt1, the giant star raised awareness due to its bright appearance and unusual nature, which represents a brief transitory period in the evolution, and eventual demise, of massive star systems.

First discovered decades ago, NaSt1 (nicknamed Nasty 1) was identified as a "Wolf-Rayet" star type, which is a star that has lost its outer hydrogen layers. Nasty 1 does not look like a normal Wolf-Rayet star however. Hubble astronomers expected to see twin lobes of hydrogen gas swirling on opposing sides of the star's core. Hubble actually revealed that Nasty1 was enclosed in a pancake-shaped disk of gas. The vast disk is 2 trillion miles wide and is believed to be the remnants of another unseen companion star. Current estimates place the nebula system just a few thousand years old.

"We were excited to see this disk-like structure because it may be evidence for a Wolf-Rayet star forming from a binary interaction," lead researcher Jon Mauerhan of the University of California, Berkeley stated in a press release from Hubble.

"There are very few examples in the galaxy of this process in action because this phase is short-lived, perhaps lasting only a hundred thousand years, while the timescale over which a resulting disk is visible could be only ten thousand years or less."

According to data, a Wolf-Rayet star evolves quickly, making them rare to spot in the vast expanse of the universe. As the massive star begins to run out of hydrogen, it swells in size. Its outer hydrogen layer becomes loosely bound to its core and more vulnerable to gravitational stripping.

Neighboring stars and planets begin to pull, scattering particles the dying star can no longer hold. As a result, the companion star begins to gain mass and the original star loses its hydrogen layers, leaving an exposed and incredibly bright helium core remaining.

The mass transfer of these massive stars is incredibly unpredictable. Some of the stripped matter can be scattered due to other gravitational forces, creating a disk around the binary system.

Nasty 1 is believed to be shedding material sporadically. Past studies using infrared light show evidence for a pocket of hot dust close to the central stars. The presence of warm dust implies that it formed recently; perhaps in phases or spurts as the chemically enriched particles from each star collide at different points.

The chaotic mass transfer will eventually end when the Wold-Rayet star runs out of material. Eventually the gas in the disk will dissipate, providing a clear view of the system.

These findings were published on May 20, 2015 in the Monthly Notices of the Royal Astronomical Society.