From the attacks in Australia, France, Denmark and Belgium to the brutal killings by militants of the Islamic State and the racist remarks and hateful demands by far-right groups across the Western world, communities across the globe have seen calls for discord and strife in recent months.

But people around the world have answered those calls for division with remarkable expressions of harmony and solidarity. Protesters and activists from Europe to the Middle East stood up defiantly and launched powerful campaigns urging respect and understanding of one another.

Take a look at six campaigns that moved us.

Days after a gunman opened fire near a synagogue in Denmark, more than a thousand Muslims in neighboring Norway formed a human shield around a synagogue in the Norwegian capital, Oslo, in a cry of support for the country's Jewish community. "Humanity is one and we are here to demonstrate that," Zeeshan Abdullah, one of the organizers, told the crowd Saturday, according to Reuters.

Responding to the powerful stance by the Muslim community, a different group of Norwegians announced it will undertake a similar protest, this time linking hands to protect a Norwegian mosque. "We want to stand shoulder to shoulder with our Muslim fellow citizens to show disgust towards increasing Muslim hate and xenophobia in society," the organizers explained, according to a translation of the event's Facebook page.

1300 Muslims link hands in a Ring of Peace around Jewish synagogue in Oslo. Best news from Europe all year. pic.twitter.com/CnsrbC3o1c

As the Islamic State group sought to inspire terror with horrific killings and propaganda videos, satirists and cartoonists across the Arab world have shared their own powerful message. Skewering the extremists with "Daily Show"-style news programs and slapstick cartoons, these comedians are taking a stand by changing the narrative around the group.

“This is one way to reject extremism and make it so the people are not afraid,” Nabil Assaf, producer of Lebanon’s satirical "Ktir Salbe Show," told the Associated Press.

The Iraqi government is also taking part in the mockery of Islamic State extremists, reports NPR, producing a musical comedy show whose title translates into “State of Myths.” The show seeks to highlight the hypocrisy at the heart of the group, and features bizarre gags including the leader of the militant group hatching from a tiny egg. 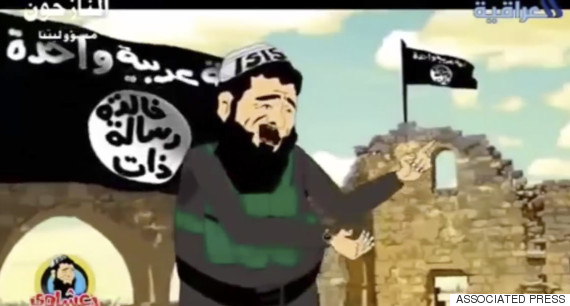 In this image made from an undated cartoon broadcast on state-run al-Iraqiya TV in Iraq, a cartoon character portrayed as a member or a supporter of the Islamic State group sings a song. (AP Photo/al-Iraqiya)

British Muslims launched the #NotInMyName campaign in September 2014 to hit back at the Islamic State group’s claim to represent Muslims around the world. The campaign, started by London-based group Active Change Foundation, was praised by U.S. President Barack Obama at his speech at the United Nations General Assembly later that month.

The campaign had its critics, many who argued that it implies Muslims must dissociate themselves from the terror group and took offense at that suggestion. But it took social media by storm, and sparked similar campaigns in Canada and France.

Another disgusting threat from the un-Islamic State #NotInMyName. We all call for Alan Henning's prompt release. pic.twitter.com/3H2Rq1ntwE

After two gunmen killed 12 people at the Paris office of satirical newspaper Charlie Hebdo on Jan. 7, 2015, millions of people around the world expressed their support for the victims on social media with the hashtag #JeSuisCharlie (I Am Charlie). When the newspaper’s website came back online later that day, it displayed only a black banner emblazoned with the Je Suis Charlie logo, and linked to translations of the message in languages including Arabic and German. The hashtag became one of the most popular in Twitter’s history.

As information emerged about victims of the attack, another hashtag was born. #JeSuisAhmed honored Ahmed Merabet, a 42-year-old Muslim police officer shot dead by the gunmen outside Charlie Hebdo’s office. “Ahmed Merabet knew better than anyone that radical Islam has nothing to do with Islam and that fanaticism kills Muslims,” French President Francois Hollande remarked at Merabet’s funeral.

The messages echo the Arabic hashtag كلنا_معاذ# (We Are All Muath) that emerged in solidarity with Muath al-Kaseasbeh, the Jordanian pilot who was held and killed by Islamic State militants. The hashtag started circulating after the pilot was captured in Syria in December 2014. When the group released a video on Feb. 4 that appeared to show al-Kaseasbeh being burned alive, Twitter users around the world expressed outrage with hashtags in Arabic and English, including #IamMuath and #ISIS_are_NOT_Muslims.

In the wake of the killings in Paris, a nation reeling from the attacks came together in an enormous display of solidarity. An estimated 1.5 million people marched through the French capital on Jan. 11, holding signs and singing songs in support of freedom of expression and unity.

World leaders also joined in the demonstrations, linking arms and expressing their condolences for those killed. Millions more joined those in Paris in cities across the country, in what was to be France’s largest demonstrations in recent history. At the day’s end, a staggering total of 3.7 million people were estimated to have taken part in the marches. 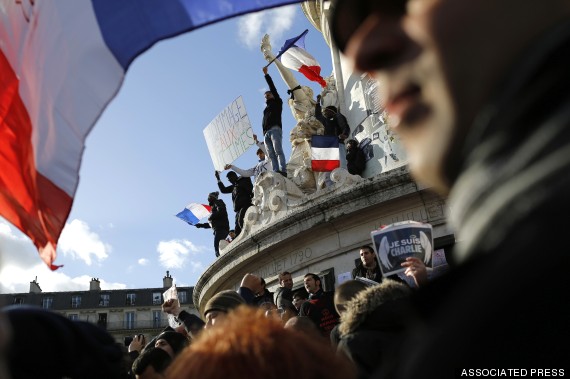 Demonstrators wave flags on the monument at the center of Republique Square before the demonstration in Paris, France, on Jan. 11, 2015. (AP Photo/Laurent Cipriani)

People of all walks of life have participated in other protests across the globe to denounce the brutality of Islamic State extremists. The size of the marches has varied from just a few hundred demonstrators to a sea of thousands, but always carried a message of defiance and denunciation.

In Jordan, a crowd of thousands was joined by Queen Rania in a march in early January after the murder of Muath al-Kaseasbeh. More than 20,000 Kurds in Germany demonstrated against the Islamic State group in October of last year, waving flags in a peaceful protest against the extremists. Hundreds marched through London in the summer of 2014 as well, making their way through the heart of England’s capital in a call for more international aid in the fight against IS. 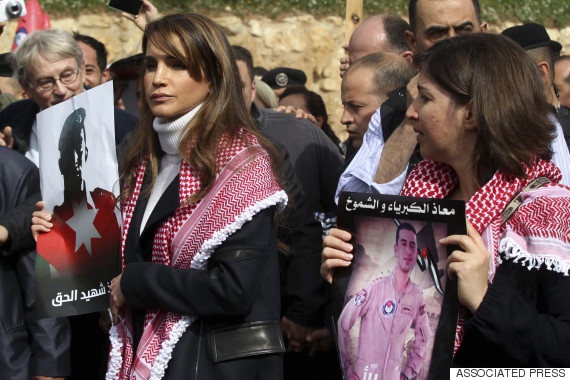