When New Jersey mom of four Elit Kirschenbaum boarded a December 30 flight home after her family vacation in the Dominican Republic, she seated her youngest daughter Ivy on her lap as usual, she told ABC News.

What followed was an ordeal with a flight attendant that Kirschenbaum says left her family "humiliated." The airline has since issued an apology for the incident, but the mom still thinks there's a lesson to be learned about the way transit companies treat passengers with special needs.

Three-year-old Ivy has Spastic Quadriplegic Cerebral Palsy as the result of a stroke she suffered in utero. Because of her condition, the little girl physically cannot sit up on her own and rests on her parents' laps during flights.

On this particular United Airlines flight from Punta Cana to Newark, however, one flight attendant reportedly refused to allow the family's seating arrangement. In a Tumblr post about the ordeal, Kirschenbaum claims that she explained to the employee that her daughter has special needs and cannot hold herself up in a chair. The flight attendant continued to insist that Ivy sit in her own seat alone, the mom recalls. 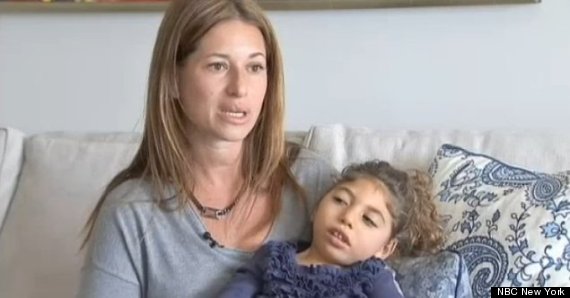 Elit Kirschenbaum with her daughter Ivy on NBC New York

In the Tumblr post, Kirschenbaum explains that her family has flown with Ivy in their laps many times and have never had a problem, until this incident. She writes:

This flight attendant returned to her co-workers and began to argue with them. She returned to argue with us. She kept quoting FAA regulations. She brought up members of the staff from the airport, including several baggage handlers who spoke very limited English, to lecture us about seating despite the fact that we were clearly Americans and spoke little to no Spanish. She insisted on creating a scene. The remaining 3 flight attendants pleaded our case, in fact one was in tears, but this one attendant dug her heels in and wouldn’t budge.

The FAA regulation the flight attendant cited was a mandate that all passengers over the age of 24 months must sit in their own seats for taxi, takeoff, and landing. But as Kirschenbaum told ABC News, "Unfortunately, life doesn't play by the rules sometimes." In an interview with The Washington Post, the mom added that Ivy "developmentally, is at six months."

Ultimately, Kirschenbaum's husband reached a compromise with the pilot, who allowed Ivy to lay across her seat and place her head in her father's lap for takeoff and landing.

Still, the damage was done. "My family was humiliated in front of a full flight of passengers," the mom wrote on Tumblr, noting that the ordeal also caused the flight to take off almost an hour late.

After Kirschenbaum shared her story on her Tumblr page, people rallied around the family on Twitter with the hashtag #UnitedWithIvy. The mom had interviews with several media outlets, including ABC News, which also printed a statement from a United Airlines spokesperson. Part of the statement read, "The parents, who were ticketed in first class, wanted to hold the child in their lap rather than have the child take the seat they'd purchased for her in economy."

This initial statement upset Kirschenbaum, who told The Washington Post that she subsequently faced backlash from social media commenters who accused her of using her daughter with special needs to "game the system" for first class seating. The mom added that she and her husband had purchased the tickets with frequent-flyer miles and were only later assigned the business class seats at the airport, at which point they decided to switch with other family members so that they could sit by their young children.

A spokesperson from United also reached out to apologize to the Kirschenbaums personally and has had "several nice phone conversations" with the family, the airline told The Huffington Post. In an interview with NBC New York, the parents stated that they weren't aware that FAA "lap children" regulations don't make exceptions for kids with special needs, but now that they are, they plan to purchase a safety seat with additional head support for Ivy to use on future flights.

While Kirschenbaum was glad to receive an apology from United and bears no ill-will toward the company, the mom thinks that airlines need to work on their procedures when it comes to people with special needs. "I want them to recognize that not everyone fits the same mold,” Kirschenbaum told The Washington Post. “You need to put humanity into your decision-making. You need to put compassion into your decision-making.”

And as for her family, the mom told NBC New York, "the lesson I hope my own children get out of it is that I will always stand beside them."

1950s: Fly from New York to London - for £1482
Hulton Archive via Getty Images
The flight with now defunct Trans World Airlines cost $290 in 1955 - which is a grand-and-a-half with inflation. Since the US airline industry was deregulated in 1978, ticket prices have fallen by 40%.
2014: Fly from New York to London - for £211
AFP via Getty Images
Skyscanner has a flight with Norwegian airlines this month for just over a sixth of the price it cost in 1955.
1950s: Not all luggage was checked
It was widely discussed after a 1955 airplane crash killing 44 caused by a bomb smuggled aboard in luggage. Jack Graham admitted building the bomb and placing it his mother's suitcase, because he was in line for a big inheritance from her $150,000 estate.But an AP report from the time declared that inspecting each piece of luggage checked into an airline was impractical.“Passengers would resent the delays, even the snooping,” the AP reporter said.
Advertisement
2014: Security includes baggages checks and body scans
ASSOCIATED PRESS
Bags go through sophiscated scanners, liquids are kept separate and restricted, you must take off shoes and belts and walk through a metal detector or full body scanner, and random checks mean cases are wracked from top to bottom. This week, it was announced that passengers unable to turn on their mobile phones would not be allowed to board flights, in case the phone was an IED.
1950s: Metal detectors were declared to be useless
Even metal detectors were rejected. “Use a metal-detecting device and it would sound alarms when it spotted innocent traveling clocks, electric shavers, iron," the AP report said.
2014: You must declare 'dangerous' substances - even if that substance is a lipstick
Monkey Business Images via Getty Images
Liquids must be in sealed containers that must hold no more than 100ml, if they are taken in hand luggage, and kept in a single, transparent, resealable plastic bag. Many items are banned from hold luggage too, including flammable liquids, car batteries, fireworks, weedkiller, ammunition and non-safety matches.
Advertisement
1950s: You are way more likely to die in a plane crash
Stroud via Getty Images
Technology was not as sophisticated and there were many more plane crashes in the Golden Age of Flying. Mid-air collisions were common, engines were known to drop out of planes mid-flight, and pilots had no technology to help them land in fog. In 1952, there were 5.2 deaths per 100,000 hours of flying - five times higher than today.
2014: You are pretty safe up there
CandyBoxImages via Getty Images
The US Bureau of Transportation estimates that flying is eight times safer than driving and twice as safe as the train, even with those pesky terrorists to contend with. And you are 11,000 times more likely to die in an airplane accident than from a terrorist plot involving an airplane, according to stats from The Flying Book.
1950s: Inflight entertainment = Postcards
Stockbyte via Getty Images
There were no inflight movies until the mid-1960s. Air stewardesses handed out books and postcards for you to write to kill time.
Advertisement
2014: Inflight entertainment = In-flight Wi-Fi, movies, music, games, digital shopping and maps
Handout via Getty Images
For example, Virgin has over 50 movies to choose from, as well as TV channels, destination guides and food ordering from your seat. And then you can also bring your own iPad loaded with entertainment (just make sure it's charged up).
1950s: Smoking and drinking are positively encouraged
Cigarettes were sold by air stewardesses, armrests had ashtrays and most airlines served as much alcohol as guests could drink.
2014: Smoking and drinking is banned or limited
Fuse via Getty Images
Inflight smoking is prohibited by almost all airlines, banned from charter flights from Britain since 1995. But there is no overall law or treaty that bans smoking on all international flights, and Air Algeria allowed smoking until only a few years ago. Drinking is allowed, apart from on some flights from Muslim countries, but stewardesses will stop passengers if they get lairy.
Advertisement
1950s: Food was fine dining
Polished wine glasses, white linen tablecloths and folded napkins were all part of the service - and never came at an extra charge.
2014: Trays of reheated gunk
Bill Grove via Getty Images
Airline food is notoriously awful - and on most short-haul flights you'll have to pay for it.