The most influential works of art are those that connect people on a personal level. An artistic expression with powerful social or political symbolism can unite us by resonating with the thoughts, ideas, and emotions of our society.

It is because of this resonance that art and politics have often been intertwined. A well-crafted message has the power to incite or quell riots.

Similarly, the art of comedy, which dates back to ancient Greek theatre, brings us together with one of the most innate human reactions: laughter. Robert Provine, a psychology professor at the University of Maryland, observed that laughter is often not just about something being funny, but more likely an unconscious social communication of our acceptance or rejection of a person or idea.

In the English Literature classic Gulliver's Travels, writer and clergyman Jonathan Swift used satire to inspire society to challenge the politicians and academics of the eighteenth century. This novel became wildly popular due, in part, to its ability to surreptitiously identify with readers who saw a part of themselves in Swift's sardonic depiction of society.

Today, the art of comedy continues to provide a unique avenue for artists to convey an honest reflection of the daily toils of humanity.

During the holy month of Ramadan, Arabs produce a plethora of television shows employing comedy and drama to entertain families who have been fasting all day. In some way, these shows often reflect the current events and realities faced by their targeted audience.

This year, I discovered one such comedy that I believe illuminates an important message to the Arabic people, and, dare I say, to the entire world. There is perhaps no place in greater need of laughter and insight right now than Syria. Western media portrays this Arabic country, whose ongoing civil war has claimed over 200,000 lives in nearly four years, as little more than a war-torn battlefield.

However, the comedy series Dunia 2015 paints a much more accurate picture of the state of the Syrian people. Created by the show's lead actress and writer Amal Arafa, this is the second season of a series that originally aired in 1999-2000. Her character is Dunia, a Syrian maid with a penchant for getting fired from the various homes she works in. 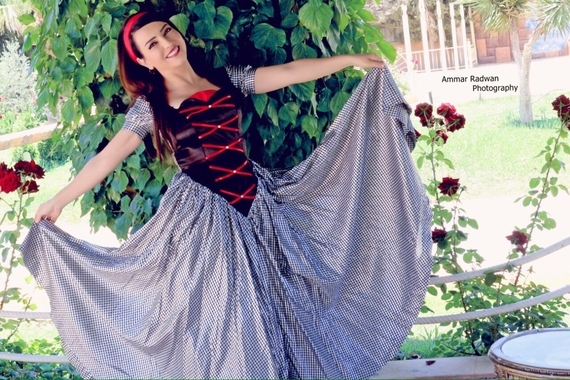 The series entertains viewers with the wacky misadventures of the maid and her best friend, a cook named Turfa, played by Palestinian-Syrian actress Shukran Murtaja. More importantly, though, it provides a rare look at what it's like to be a citizen stuck in the middle of a volatile struggle for control.

I had the opportunity to interview Arafa, and she elaborated on why the show's characters embody the plight of Syrians today.

"People connect with Dunia because she represents the reality of many who are watching their country fall apart," she said. "Her determination to remain in her warn-torn homeland is a symbol of resistance that most Syrians can relate to."

While the characters' daily life certainly relates to those still living in Syria, it also exposes a side of the country that news outlets have ignored since the civil conflict began four years ago. It is true that some areas have been ravaged by the battles between the regime of President Bashar al-Assad and those who wish to overthrow it, but other areas have remained relatively safe, such as the city of Damascus where the series is filmed.

Arafa insisted on filming in Syria to show the world that her country was much more than just a battleground. The series shows us a place where people still celebrate birthdays, get married, and continue to live a life of relative normalcy. In Damascus, little has changed besides the appearance of well-armed checkpoints. Despite the distant sound of artillery fire, marketplaces are still bustling, businesses are still running, and everyone still goes on about their daily activities.

"We are adapting to the situation we find ourselves in. Since the fighting began, we have had little electricity, less access to water, and no guarantees of safety," Arafa said. "But we are managing. We are determined to live and to see the day that our lives are once again free from the shackles of warfare." She explained to me how during the filming, there were bombs that fell close to their set. She continued, "We would thank God for surviving it, and continue on with our work."

The show uses humor to confront many of the issues that are faced by Syrians today. Dunia wound up in Damascus after being forced out of her village by a group of militants that she refers to only as "they." Her anguish from being displaced is a recurring theme in the show-- a painful reality felt by more than 9 million Syrians who have been displaced since the civil war began in 2011. Arafa pleads, "I hope these militants leave our country so that our people can return to their homes."

The characters are regularly challenged by the rising prices of essential goods like food and fuel, which reflects the deterioration of the Syrian pound since the conflict began.

Arafa portrays the protagonist as a simple, honest, and caring individual who loves her country more than anything. She despises the war that has been tearing Syria apart, and the vocalization of her disdain serves as a powerful message to those affected by the civil hostility.

"May God have no mercy on those who caused the war - those who funded it, those who paid money to arm people to kill each other," Dunia says in the series. "The solution to the plight of a nation is not through bloodshed, but by opening dialogue and making reformations in a positive way."

Arafa made it clear that she is supportive of all people of Syria, whether they were with or against the Assad regime. She believes that extreme foreign influence is primarily to blame for the war, and hopes that the series can serve as a symbol to help bring her people together.

"Dunia 2015 is art, and art always has a human message. I wanted to give positive energy, to stress the importance of unity rather than division," Arafa said. "We should realize that making our country a better place is not accomplished by shedding one another's blood."

"The cause of the war is extremism, from both sides. Extremism is what was funded by those interested in starting a war to pursue their own interests. And this is where it got us."

The media has generally blamed the Assad regime for the Syrian crisis. Many outlets have suggested that before the conflict, Syrians were governed by an oppressive and tyrannical regime with no regard for basic human rights. Arafa rejects this concept, and uses the series to contrast life in Syria before the hostility - a time when citizens owned the homes they lived in and received the social, medical, and educational benefits that many advanced countries still struggle to provide to its citizens.

"Before the war, nobody went to bed hungry," Arafa said. "It is true that certain things saw some degree of corruption, but we will not fix anything with extremism and terrorism. It is all about moderation. Extremism, on both sides, has caused as much destruction as terrorists have been doing."

While many people find the episodes entertaining, the series has touched some people's lives more profoundly.

"I received messages from all over the world, telling me how much people had enjoyed the show," Arafa said. "But the most powerful responses I got were from Syrians who told me I had helped them in some way. I was told by those on each side of the conflict that they had sat together and watched the show in cafes, and it made them feel united."

Messages like that capture the potential of Dunia 2015, and comedy in general, to have a profound influence on those who experience it. Laughing together is part of being human, and reminds us that we are all in this life together.

In an article published in November of last year, Dr. Bente Scheller, the director of the Heinrich Böll Foundation's Middle East office in Beirut, explored in depth the decision those still living in Syria face: whether to risk their lives to stay and help their hurting community or to leave everything they know behind in search of a safe haven. Scheller concluded that the escalating violence and lack of promising attempts to end the conflict will likely force nearly all Syrians to at least consider the possibility of starting a new existence somewhere else.

In the final episode of the series, it is fitting that Dunia is forced to choose whether or not to flee the country and become a refugee with Turfa's family. She eventually gives in to her best friend's pleas, and they board a bus that will take them to a boat headed to Europe, with Sweden as their final destination. In the real world, Sweden does indeed have a program that grants permanent residence to Syrian refugees.

The series accurately depicts what it is like for refugees to escape Syria, risking their lives and relying on shady agencies to illegally transport them to safety. Often, those who escape have no place to go, as the surrounding countries have been mostly reluctant to welcome refugees.

In the final moments of the show, we see the characters board the boat that will separate them from their homeland. But as the boat leaves the shore, Dunia realizes that she loves her country too much to abandon it during its time of need and leaps into the water -- a dramatic conclusion that stays true to her character as the epitome of perseverance.

Arafa, like Dunia, loves Syria so much that she is unable to leave it. She made her show with the aspiration that it would inspire the Syrian people to hold on to the hope that the conflict will be resolved soon and that peace will allow them to return to a life without war. She still holds on to that hope and imagines Syria as it was before 2011, with room for reform but in a more civilized way.

With a sigh of pain, Arafa said, "I hope the international community [including the U.S. Congress] stops counting refugees, and becomes more proactive in opening a dialogue between both those for and those against the Assad regime to reach a solution. War is a business; peace is a process that only begins when we bring all Syrians to the same table of dialogue. I am a supporter of a government, not a regime. I am a supporter of my people, whatever their political stand is. This is the true meaning of democracy."

"It pains me that my two daughters have to grow up watching their country collapse under the pressures of war," Arafa said. "I worry about them, but I have to be optimistic that one day Syria will be like it was before the conflict, or better."

"I cannot give up on my country."

Arafa invited me to join her for dinner in Damascus the next time I am in the Middle East-- an offer I am all too happy to accept. As a Palestinian-born refugee, Syria was one of the very few countries in the world that allowed me to visit and live there without a visa (although the place I knew then is much different from the Syria of today). This is why it hurts me to see the country of peace break down into pieces.

"My wish is that Dunia 2020 be filmed in all different parts of Syria," Arafa told me. "And that Dunia and Turfa will be able to return to their homes and live their lives free from the oppression of war."