In a landmark case, Peru has compensated a woman for denying her a medically indicated abortion. In 2001, K.L. was a 17-year-old who was diagnosed as having a fetus with anencephaly at 14 weeks' gestation. As described below, this fetal anomaly is routinely lethal. Although abortion was legal in Peru in this circumstance, a hospital director refused her request for an abortion. She was forced to continue her pregnancy and deliver the doomed fetus, which survived only four days. Working with human rights lawyers, K.L. filed a complaint with the United Nations Human Rights Committee, based in Geneva. In 2005, the Committee concluded that Peru had violated several articles of the International Covenant on Civil and Political Rights, and it ordered financial compensation to K.L. Fifteen years after the incident, reparations were finally made for Peru's "cruel, inhuman, and degrading treatment." This marked the first time a United Nations Committee had held a country accountable for failing to ensure access to safe, legal abortion.

Abortions for fetal anomalies
Fetal abnormalities account for a small but important proportion of abortion requests. Indeed, modern prenatal diagnosis is predicated on the availability of legal abortion should an abnormality be detected. Most women who undergo prenatal diagnosis receive favorable news and thus continue desired pregnancies.

Anencephaly: a deadly defect
Anencephaly is an uncommon (1/1000 pregnancies) but devastating neural tube defect. The human embryo starts as a tube, which subsequently closes at both ends at around 4 weeks. If the bottom fails to close, then meningomyelocele (spina bifida) occurs. If the top fails to close, anencephaly results (photo). 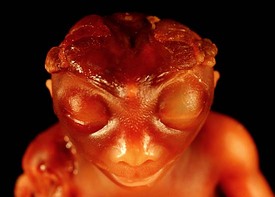 In this condition, major parts of the brain, skull, and scalp are missing. Fetuses with anencephaly are doomed. Many die during pregnancy or childbirth, and those born alive usually die soon thereafter. Median survival time after birth in a recent case series was 55 minutes. The mother and family often witness the death of the malformed infant.

Most choose abortion
Most women who receive a prenatal diagnosis of anencephaly choose abortion. In a recent review of the world's literature, researchers at the Centers for Disease Control and Prevention (CDC) found that overall 83% of women in this setting chose abortion, ranging from 59% to 100% in individual studies.

This CDC study confirmed earlier evidence that most women who learn of serious fetal defects during pregnancy choose abortion. In the figure below, each square indicates the overall percent opting for abortion; the vertical line is the 95% confidence interval for the overall percent. A narrow line indicates good precision. The proportion choosing abortion varied by severity of the fetal anomaly. Among more than 5,000 women in five countries who received a prenatal diagnosis of Down syndrome (trisomy 21), 92% chose abortion. For anencephaly, the proportion was 84%. For sex-chromosome defects, abortion frequency was lower. With Turner syndrome (45X) and Klinefelter syndrome (47XXY) the proportion who chose abortion was 72% and 58%, respectively. The corresponding figure for spina bifida (meningomyelocele) was 64%. 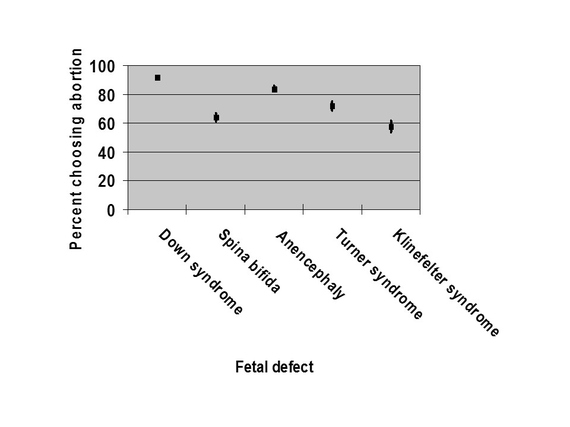 Risks to the pregnant woman
In settings where legal abortion is not an option, women with a fetal diagnosis of anenecephaly must continue these doomed pregnancies. The risk of maternal complications appears to be high. In a recent report of 26 cases from Ireland, most women had labor medically induced, since pregnancies with anencephaly tend to continue longer than normal. Seven women (27%) had excessive amniotic fluid develop around the fetus, and three of these had to have fluid removed repeatedly by needle in late pregnancy. Four of the vaginal births had mechanical difficulty delivering the fetal shoulders.

Progress in Peru
During the negotiations with Peru over K.L.'s ruling, lawyers filed and won another case against Peru. In this case, another teenager was denied a medically indicated abortion. Importantly, Peru in 2014 adopted national guidelines for safe abortion services which should provide clarity for health care providers and for women in the years ahead. Nevertheless, few women have apparently been able to access safe, legal abortion since adoption of the guidelines. Much work remains to be done to ensure that women's human rights are respected.