NEW YORK, NY -- Last week, the Third Committee of the United Nations General Assembly voted on a special resolution addressing extrajudicial, arbitrary and summary executions. The resolution affirms the duties of member countries to protect the right to life of all people with a special emphasis on a call to investigate killings based on discriminatory grounds. The resolution highlights particular groups historically subject to executions including street children, human rights defenders, members of ethnic, religious, and linguistic minority communities, and, for the past 10 years, the resolution has included sexual orientation as a basis on which some individuals are targeted for death. 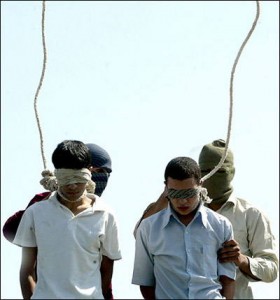 These two teenagers, suspected of being gay, were executed in Iran in 2005.

The tiny West African nation of Benin (on behalf of the UN's African Group) proposed an amendment to strike sexual minorities from the resolution. The amendment was adopted with 79 votes in favor, 70 against, 17 abstentions and 26 absent.

Add to this Bahamas, Belize (where you get 10 years for being gay), Jamaica (10 years of hard labor), Grenada (10 years), Guyana (life sentence), Saint Kitts and Nevis (10 years), Saint Lucia (10 years), Saint Vincent (10 years), South Africa (Apartheid? What apartheid?), and Morocco (ruled by a gay monarch!). They are all on the list of nations that do not think execution of gays and lesbians is worthy of condemnation or investigation. (The full vote tally is published beneath this column.)

To its shame, Colombia was among the 16 nations who abstained.

Those against the amendment include every European nation present, all Scandinavian countries, India, Korea, most of Latin America, all of North America, and only one Middle Eastern nation: Israel. In most countries in the Middle East, it is a crime to be gay--in some, like Saudi Arabia, it is punishable by beheading and in others, like Iran, by hanging.

The UN has a remarkable track record of doing virtually nothing when presented with mass killings or genocide. "Never again!" was the cry after the holocaust. Since then, the world has witnessed a dozen more never agains with strong condemnation from the UN coming after the corpses pile up. A resolution of the sort that was voted on in the General Assembly is significant for its clarity of message: "It's okay to kill the gays."

The British government had pleaded: "The subject of this amendment--the need for prompt and thorough investigations of all killing, including those committed for ... sexual orientation--exists in this resolution simply because it is a continuing cause for concern."

Not a single African nation voted against the amendment. This is not surprising. Homosexuality is illegal in most of Africa. So acceptable is the notion of extra-judicial killings of gay men and women for their consensual private conduct that one of these countries, Uganda, is considering legislation making homosexuality (not the behavior, just being gay) punishable with death. The proposer of the bill, David Bahati, and the Ugandan "Minister for Ethics and Integrity," Nsaba Buturo, have vowed the bill will pass before parliament dissolves on May 12, 2011.

Uganda is not a Muslim nation. It is a Christian country. And it was American evangelical preachers in Uganda who fanned the flames of what could turn into mass executions in a continent that has seen genocidal murder occur numerous times in the last two decades on the basis of religious belief, ethnicity, and membership in a linguistic minority (Burundi, Darfur, Eritrea, Ethiopia, Nigeria, Rwanda, Somalia, Zimbabwe...).

I had the opportunity to meet one of the courageous individuals in the struggle against this potential mass killing in Uganda. Her name is Kasha Jacqueline and she was one of the presenters at this year's Oslo Freedom Forum. Jacqueline was concerned for her safety when she made her way to Oslo given that she could have been the subject of retaliation upon her return.

Upon arriving in Norway, she was approached by several members of one of Oslo's gay and lesbian organizations who urged her not to speak at the Oslo Freedom Forum because they disagreed with our inclusion of several speakers who were outspoken critics of left-wing dictatorships. Sadly, some people in Oslo believe that only those on the left can call themselves human rights defenders -- their double standard usually will manifest itself when they ignore the crimes of the governments they favor.

Kasha Jacqueline was quick to tell them that she was using us, and not the other way around. Her speech was so powerful that she was invited to stay an extra day and give the same speech at an event open to the public. She kindly accepted.

Just days later, the inclusion of Kasha Jacqueline in the program of the Oslo Freedom Forum was one of the subjects of public condemnation by an American pro-life activist. The irony was excruciating. Here was a man who devotes his life to what he describes as stopping the mass killings of babies chastising an event for including someone in our program who wants to stop the mass killings of gays and lesbians. My response to his jeremiad, which was never published, concluded: "There is nothing to discuss in a circumstance like the one faced by Ms. Jacqueline and those affected by this legislation other than to offer: 'Ms. Jacqueline, how can we help you and your organization prevent what could become a horrific massacre?'"

Thus the left, dear reader, thus the right. They deserve each other. Thor Halvorssen is president of the Human Rights Foundation and founder of the Oslo Freedom Forum. Follow him on Twitter and on Facebook. 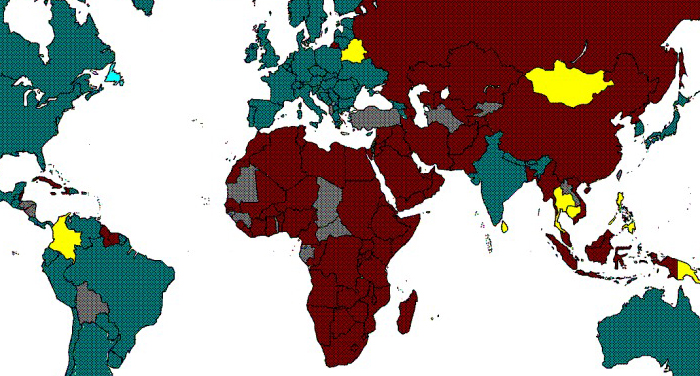 Red governments voted for the amendment; yellow govt's abstained; grey govt's were not present; green govt's are the only ones to vote against the amendment which endangers gays.

In favor of the amendment to remove sexual orientation from the UN resolution on extrajudicial, summary or arbitrary executions (79 nations):

Opposed to the UN amendment to remove sexual orientation from the resolution on extrajudicial, summary or arbitrary executions (70 nations):