If the big powers lack the will or vision to resolve it, then throw it at the United Nations -- at least to camouflage responsibility. The UN Security Council (UNSC) effectively controlled by the veto wielding powers can be exploited for action when self-serving as well as deflecting accountability for inaction. The Syria crisis demands a response posing a threat to international peace and security, one of criteria for the UNSC to act, and resulting in grave violations of international humanitarian law. An evasive/selective UNSC similarly responded to, or more accurately, failed to adequately address the conflict and genocide in Bosnia & Herzegovina (BiH) during the 1990s.

From Srebrenica to Syria -- UN and Kofi Annan:

The failures of the response in BiH presumably should have been a lesson learned. The UN report subsequently published with respect to the betrayal of the UN mandate to protect the UN/NATO designated safe area of Srebrenica acknowledged multiple failures, but it largely skirted the culpable role played by the major capitals. The UN report was sanitized by these capitals who allowed Srebrenica to fall despite commitments and largely left the UN alone to answer for the betrayal.

When Kofi Annan last spring assumed the role of UN and Arab League Special Envoy for Syria, the lessons he learned as head of UN Peacekeeping during the Srebrenica genocide should have provided a compass for his new mandate. Unfortunately that did not occur, and Kofi Annan's mandate ended with Syria in a more dramatic situation. Again, Kofi and the UN carried the brunt of the blame, but what about the major powers?

Send Prosecutors if Not Peacemakers? 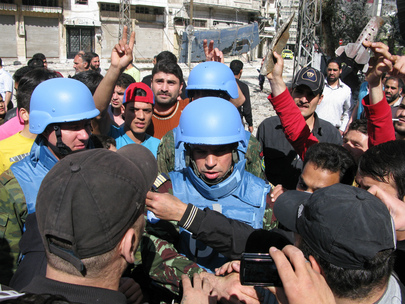 Some lessons have been learned since Srebrenica. Peacekeepers are not to be committed unless there is a will to faithfully support their efforts/mandate. It was probably appropriate to withdraw the 300 UN observers sent to Syria. Their mandate and numbers were inadequate to the task, and even then there was no will to act upon their reports of horrific killings, suffering and abuses. As in BiH, such UN personnel could have become an impediment or excuse to do nothing lest they become targets/hostages. However, there has been little to fill the vacuum, particularly as it relates to the grave violations of international humanitarian law, as bad or worse than what occurred under Colonel Gaddafi's Libya.

Syria is quickly approaching the numbers and systematic nature of the crimes committed during the war and genocide in BiH. The conflict in BiH continued largely unabated for more than 42 months. Syria should not have to wait so long, or at least not as far as a commitment to the rule of law and justice is concerned. The International Criminal Court (ICC) did not exist then and was in significant part born out of the momentum of the ad hoc Tribunal (ICTY) created in response to the crimes committed in BiH and the former Yugoslavia. But why has the UNSC failed to refer Syria to the ICC?

Employing Rule of Law to Serve Own Interests Rather than Rule of Law?

Unfortunately the biggest powers, (3 of 5 -- Russia, China and the U.S. -- of the veto wielding states in the UNSC), are not party to the Rome Statute and members of the ICC. Are these powers acting in a self-serving manner or at least selectively when referring matters to the ICC? Why Libya and Sudan but not Syria and Myanmar? The veneer has been lifted. The Assad regime has effectively become a client of Putin's Kremlin, but referring Syria to the ICC would bring into scrutiny all sides to the conflict.

Some argue that what Syria needs now is everything from a ceasefire to intervention. Undoubtedly, however, a path to peace is difficult to embrace unless there is a compass that will outline the criteria for future leadership and perhaps coalition of various forces in Syria also excluding the culpable. Without the rule of law, accountability, bloodletting, and revenge could dominate for months or decades to come. The UN High Commissioner for Human Rights, independent commissions of inquiry established by the UN Human Rights Council, and a range of NGO's as Human Rights Watch have called for the appropriate investigation and prosecutions to follow. However, the UNSC has not acted, and the western democracies have also not pressed for a UNSC vote to refer to at least expose those who shield the culpable.

Unfortunately, here the P-5 (the veto wielding UNSC members) share common interest in not being exposed as not adequate to the task. The demand here is not for their soldiers to intervene but rather for investigators and prosecutors to at least begin the process -- a necessity for any Syria that hopes to reclaim peace and move forward consistent with the rule of law protecting all its citizens as well as holding all accountable. And, after a repeat of many of the same mistakes of omission and commission since Bosnia, will the UNSC P-5 be able to cling to the exclusive powers/privileges even as it increasingly appears unworthy?